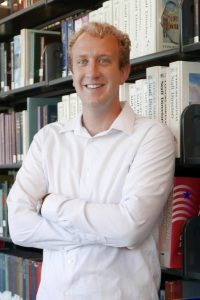 He specializes in the history of the United States and, specifically, the U.S. South. In 2017, he published a book with The History Press on the subject of Alabama barbecue. He previously published articles in Southern Cultures and Louisiana History on the subject of black performance and politics in the Jim Crow era.

Currently, he is working with the University of Missisippi Press on his forthcoming book “The Best Notes Made the Most Votes”: Race, Politics, and Spectacle in the South, 1877-1932.

“The Best Notes Made the Most Votes”: Race, Politics, and Spectacle in the South, 1877-1932. Oxford: University of Mississippi Press, forthcoming.

An Irresistible History of Alabama Barbecue: From Wood Pit to White Sauce. Charleston: The History Press, 2017.

“‘A Red Flag before an Army of Old Vets’: Black Musicians and the United Confederate Veterans Reunion in New Orleans, 1903.” Historicizing the Present University of Virginia Conference. Charlottesville, Va. Spring 2013.