Alumnus and editor of the Los Angeles Times speaks on campus

Beyond bearing the responsibility of writing an ethical story, journalists must “make our readers care,” said Davan Maharaj, editor of the Los Angeles Times and UTC alumnus. 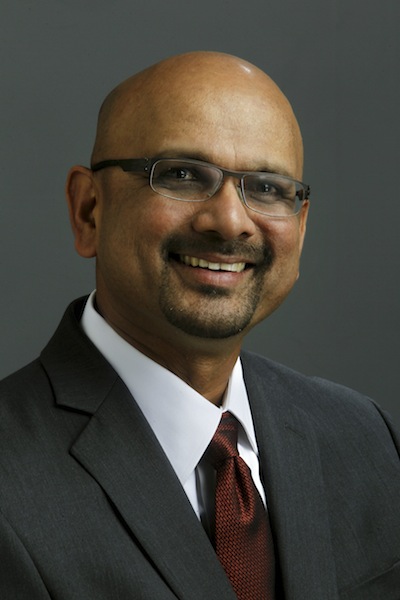 “We help readers emotionally connect with the lives of others,” Maharaj told a group of students, his former professors, and community leaders.  Maharaj was on campus to celebrate the opening of the new UTC TV Studio.

Maharaj, the former managing editor of the UTC University Echo, was the special guest at an open house for the University’s newly renovated TV Studio.  Maharaj  won the 2005 Ernie Plyle Award for Human Interest Writing with the six part series “Living on Pennies.”  His work has provided the inspiration for readers “to donate tens of thousands of dollars to aid agencies working in Africa.

It’s been 25 years since he left the University and began to work for the Los Angeles Times. Maharaj is amazed by how much the world has changed, and he said he is humbled by the position he finds himself in today.

He wants to continue to inspire readers who are rendered numb by a 24-hour news cycle and “anesthetized by the latest tragedy.”   He wants them to spill their morning coffee when they read a story or throw the newspaper across the room in anger.  “I want readers to think of us as indispensable,” Maharaj explained.

Acknowledging the turbulent times swirling around newspapers in the US, he admits there are times when he wonders, “What have I got myself into?”  The challenge, he said, is to scale back but try not to compromise.

“Storytelling is no longer stories and pictures.  The medium has a chance to come alive,” he said.

Maharaj acknowledged Dr. Kit Rushing, who taught him Law and Ethics at UTC.  “He has kept me out of a lot of trouble,” he said with a smile.  He encouraged the crowd to Google “Rate My Professor” and look up Dr. Jim Ward.  “You’ll get a good laugh.  Dr. Ward taught me a great deal about effective writing,” Maharaj said.

Of everything that happened during his academic career at UTC, Maharaj could not remember “a single bad thing,” although he did remember stressing over not being prepared for a test.

“Like any good UTC student, I prayed for snow.  It was April—a long shot.”  When he awoke and heard the news reports it had, indeed, snowed, he remembers thinking “thank God!”