Lupton Library exhibit: an assassination and the beginning of WWI

On June 28, 1914, the Austrian Archduke Franz Ferdinand was assassinated in Sarajevo, an action that lit the fuse for the beginning of World War I.

To mark this historic event, the Lupton Library has an exhibit on display until July 15th.  Visitors are welcome to view it during the library’s regular hours. 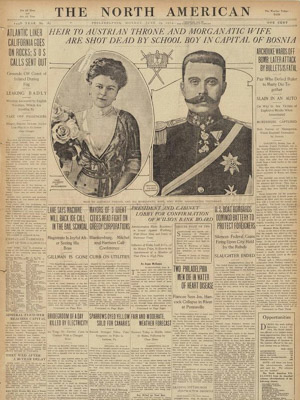 The exhibit was arranged at the suggestion of Dr. Aaron Shaheen, UC Foundation Associate Professor of English, who offers his insight.

Why is it important for Americans to understand how WWI began?

AS:  America reached a kind of maturity as a result of entering the war. For three years President Woodrow Wilson chose to keep a technical neutrality, but as German U-boats continued to apprehend or sink more of our commercial vessels, he realized that if America wanted to be a great nation, it needed to play on the world’s economic stage—which meant trading with European countries that had been blockaded. Indeed, by the war’s end, with so much of Europe in tatters and/or experiencing radical governmental upheaval, the U.S. had emerged as the world’s dominant economic superpower, a title that we have never really given up since.

Moreover, we can trace the U.S.’s current involvement in Iraq to the First World War. When the Ottoman Empire dissolved after it surrendered to the Allies alongside Germany and Austria-Hungary, its territories were taken over by the British and French. Present-day Iraq was born when its British administrators assembled it out of (frequently warring) Shia, Sunni, and Kurdish factions.

If anyone has ever considered a facelift, tummy tuck, or Botox injections, he or she can look to wartime surgeons (New Zealand ’s Harold Gillies in particular) for inventing plastic surgery to deal with the unprecedented number of facial wounds that trench warfare produced.

Finally, the only way to understand the Second World War, which engulfed America in 1941 and which cost over 400,000 American lives, is to understand the First World War. All the major players were there for the first conflict, from Churchill to Hitler, Mussolini to Franklin Roosevelt. And without the moral and economic degradation Germany faced once it was forced to assume responsibility for the war, it’s plausible to think that the environment would not have been as ripe for Adolf Hitler and this Socialist Worker’s Party to assume government control by the early 1930s.

It seems no matter how many traumatic conflicts people live through or the history courses they take, they never really learn.

AS:  The other major legacy of the war is that we finally set aside the notion that humans could learn from history to avoid future wars. Wilson and others saw the conflict as “the war to end all wars,” because it would “make the world safe for democracy.” But the war also gave rise to a competing idea—that of “total war,” which sees warfare not only as a constant in human endeavors, but that it pervades all aspects of human society. The concept therefore muddies the distinction between the homefront and the frontline. If the Second World War was born of the First World War, and the Cold War (including both the Korean and Vietnam conflicts) was born of the Second World War, it’s clear that we seem doomed to stumble into more bloodshed. The Enlightenment-born hope that we might learn or rationalize our way out of future wars seems rather illusory.