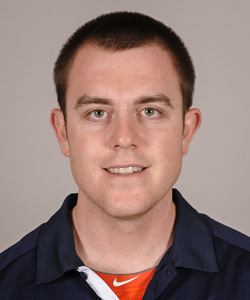 These awards are given annually to one member of each of the 16 leagues in Minor League Baseball, as well as one award for the Dominican Summer League and the Minor League Coordinator of the Year.

“This award was really an honor because it’s open to voting, so you get to show respect and recognition to the people you think are doing a good job. It’s really cool to be recognized that way,” said Gregorich ‘13.

As the winner for the Appalachian League, Gregorich, along with the other winners, is now eligible for the prestigious Minor League Athletic Trainer of the Year award voted upon by the full membership of PBATS. That award will be given at the 2014 Baseball Winter Meetings in December in San Diego, California.

“We’re excited that one of our graduates has accomplished so much in that one short year, it’s really a testament to the athletic training program and to his own hard work,” said Dr. Valerie Rutledge, Dean of the College of Health, Education and Professional Studies

Gregorich graduated from UTC with his Masters of Science degree in athletic training in 2013. Even before graduating, he served as a graduate student football athletic trainer at UTC and completed a sports medicine internship with the Cleveland Indians.

“The professors really did a good job of preparing us for our careers. I really want to thank the faculty and staff in the athletic training program – Drs. Colston, Baker, Wilkerson, and Acocello,” said Gregorich.

Gregorich became interested in sports medicine after having to do physical therapy during his high school baseball career. He would like to stay in baseball and hopefully become a head athletic trainer for a major league team.