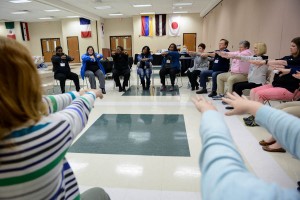 As the aging population in our community continues to grow, it becomes increasingly important to insure their quality of life. A Matter of Balance (MOB) addresses the threat of falling, one of the major problems of this population. MOB Master Training took place on the UTC Campus on March 16 – 17.

“A lot of it is about engaging older adults in this conversation and to spread the message of falls management and fall prevention. Older adults come to these classes, either because they’ve had a fall and want to prevent more or because they’re being proactive. Once there, they get to be very social and learn from each other,” said Patti League, RN, A Matter of Balance Lead Trainer and Program Manager.

A Matter of Balance was developed by Boston University and MaineHealth Partnership for Healthy Aging and is offered in 38 states across the U.S. Older adults attend eight 2-hour sessions, in which they make changes to reduce fall risk at home, exercise to increase strength and balance, and set realistic goals for increasing physical activity. 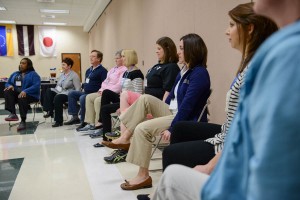 In MOB Master Training, people were trained to become Master Trainers who can then train lay coaches throughout the southeast region to provide free MOB workshops to people who are at risk of debilitating falls and disabilities at locations where seniors populate, such as senior centers and assisted living facilities.

“I think this is a great program and I’m glad to have this opportunity to help people in our growing aging population have a better quality of life. We have a neighborhood exercise wellness program, and we have a seniors group, and I knew from working with this group that falls are one of their big concerns. So, if I can do anything to help educate them on preventing falls, I wanted to do that,” said Monica Burke from City of Chattanooga Youth and Family Development, one of the participants in the MOB Master Training.

“The thing that has influenced me the most is that, as long as a senior can stay active, at whatever his or her level may be, that will create a better future for them. If they are inactive, they start restricting their activities, not going anywhere anymore because they are scared they are going to fall. I don’t want them to feel like prisoners in their own home,” continued Burke. 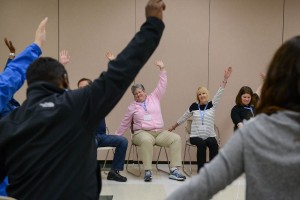 After a competitive application process, twenty professionals representing healthcare, social services, higher education, local government, wellness, and other sectors were chosen to participate in this March training. Master Trainers receive a nationally recognized license to facilitate coach trainings and oversee participant programs. They will help expand the program through the greater-Chattanooga-Hamilton County area, nine surrounding counties and into northwest Georgia.  Two applicants with the UT Medical Center in Knoxville will implement the program in Knox and surrounding counties.

“This program is growing because of local efforts,” League said.

“This training demonstrates how powerful community partnerships can be, because this didn’t happen overnight, it took months of planning and many different partnerships and funding sources,” said Carleena Angwin, Public Health Educator with the Health Department.

“Five years ago I did this training with Patty and since then we have offered six coach trainings and have trained many coaches in the area. We’ve had a lot of success and interest in the program and hope it continues to grow,” Angwin said.