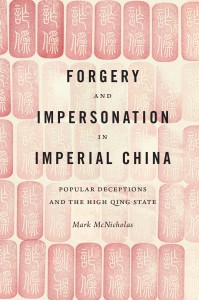 The UTC History Department and College of Arts and Sciences, in partnership with the Southeast World History Association (SEWHA) present “Arenas of Deception: Views from Late Imperial China,” a lecture by Dr. Mark McNicholas of Altoona College, Pennsylvania State University, on Friday, April 1, 6:00 P.M. at the Read House in downtown Chattanooga. This event is free and open to the public.

Dr. McNicholas’ talk will draw from his recent book, Forgery and Impersonation in Imperial China: Popular Deceptions and the High Qing State (University of Washington Press, 2016).  In it he explores how, in a system where money bought access to many jobs, honors, and freedoms, those who lacked the ability to acquire such positions by legal means used fraud, forgery, and impersonation to do so, and how the Qing state, which viewed these behaviors as political crimes, responded.  In keeping with the SEWHA conference theme of “Frauds, Deceptions, and Manipulations (and their Consequences) in World History,” McNicholas uses the records left by this shady behavior to shed new light on how ordinary people interacted with the state in late imperial China.