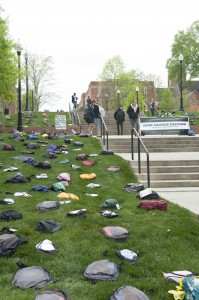 Each year, 1,100 students die by suicide. That’s a hard number to ignore when 1,100 backpacks line sidewalks and dot greenways in the heart of campus. Many were donated by friends and family members left in the wake of a young life gone, some with attached photos of loved ones lost to suicide and some with stories of regret or encouragement.

“You can make a difference for people that are struggling.”

“There is HOPE. There is HELP. You are NOT ALONE.”

These are just a couple of examples of the sentiments attached to the backpacks.

With their Send Silence Packing campaign, Active Minds is spurring awareness and positive action in response to the second leading cause of death among college students, suicide. The campaign set-up their visual demonstration in the busiest spot of UTC’s campus on Tuesday. As students filed out of buildings and made their way through Heritage Plaza to afternoon classes or lunch in the UC, they paused to read the stories attached to bags or met with volunteers passing out blue flyers. 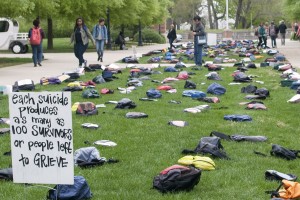 One of those volunteers was Shauna Webb who works with the Healthy Transitions Grant Program at the Volunteer Behavioural Healthcare System.

“I’ve seen mixed responses. Either people are super impacted by this–they’re taking it in and soaking it in. Or some people have no idea what this is, so it’s really neat to talk about it to them. And then some people have had a really hard time taking this in.” She continued “They’ve had family members, or roommates who have been through something similar, or even themselves. So this is impactful and I think it’s a good way to talk about it. It’s super positive.”