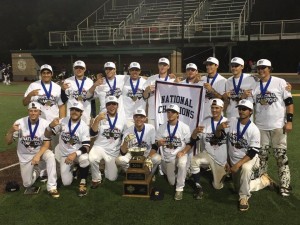 For the UTC Club Baseball Team, the players are every bit as scrappy as their mascot. The team went from being unranked, and largely unknown, to winning the National Club Baseball Association (NCBA) DII World Series.

Nathaniel Ortiz, the 2015-2016 Club Baseball president, made some big changes during his first year in office.

“The other club officers and I decided that this year would be different. We weren’t going to come in just expecting to lose. No one likes to lose,” said Ortiz. “There was this expectation before that oh, this is just club baseball, you can just come when you want, not go to practice, play when you want. This year, we decided that if you want to play, you’re going to practice, and you have to give it 100%. We let the guys know that from the start. We started off with 25 guys, and after that first meeting, we had 15 guys left who were really committed to the cause.”

“We beat some very competitive teams like Florida Gulf Coast, which was the No. 2 team in the nation at the time. We weren’t even ranked,” Ortiz said. “But we still took it one day at a time – practice hard, win this game. Any time the guys started getting cocky because we beat a team by a large margin we’d say hey, stay focused, stay committed, that was just one game.”

The team played hard, with a twelve game winning streak that took them to the South Atlantic Conference West tournament. 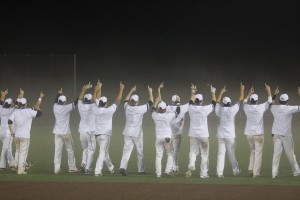 “It was nice to get some recognition after that. Even our NCBA District Coordinator came up to us after that and said, ‘You guys are the scrappiest team I’ve ever seen,’” Ortiz said. “We went through the entire season without getting a single home run. We had to steal bases and basically play small ball. That’s how we won all our games.”

Going into the NCBA DII World Series, the team was nationally ranked at No. 6, out of 130 teams.

“We felt we were still kind of being underestimated. We got the number three seed – we thought we deserved number one. We had kind of had a chip on our shoulder through the tournament,” Ortiz said.

On May 24, the Mocs squared off against St. Louis at the championship game in in Pittsburg, KS.

“We went into extra innings and it was the bottom of the eighth, runners on 2nd and 3rd, two outs, when Janson Roberson got the game winning hit, went right over the first baseman, and we won it. They were the best team we’ve ever played, but we played hard, and no roll went unappreciated. Everyone was committed and gave their all and we accomplished our goal.”

UTC walked off on Saint Louis 3-2 in the bottom of the 8th, earning them the No. 1 ranking in the nation. UTC pitcher, Ty Tucker, was named MVP of the NCBA DII World Series. Tyler Mazrimas and Jeremy Gonzalez voted as NCBA DII All-Americans. The team went undefeated against the seven other top universities across the nation to win UTC Club Baseball’s first national title! 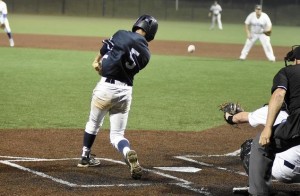 Janson Roberson getting the game winning hit against St. Louis.

“We showed them in the end, we won it all, but we have a target on our backs now. We have a championship to defend and we plan on winning it again,” Ortiz said.

“We’re very proud of our club baseball team and we look forward to the same effort next year,” said Miles Ledford, Assistant Director of Campus Recreation.

This fall, the team is planning to hold a tournament. They’ve already gotten inquiries from teams asking to play them. The tournament slated to take place sometime in November, with the theme of a Turkey Tourney, where the teams and the public could get involved with donating canned goods.

“Before, no one would have been interested in playing us, because they didn’t know who we were. Now they know. Eastern Kentucky, last year’s champions, want a championship showdown now,” Ortiz said.

Ortiz graduated this spring with a BS in Biology, and is coming back to UTC this fall for his MBA. He plans to stay involved with the team, even if he won’t be playing anymore.

“I won’t be playing now, but I’ll still be around, supporting it behind the scenes,” Ortiz said.

The team will be holding tryouts at the start of the Fall 2016 semester. You can find out more by visiting the team’s table at orientation, or by following them on Twitter or Facebook.