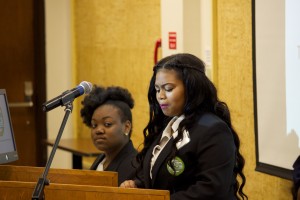 Students from Tyner High School and The Howard School recently went head to head in a debate tournament to compete for recurring scholarships to UTC.

The tournament consisted of two qualifying rounds leading up to the final debate in the UC Auditorium this May, during which teams competed in front of a professional audience that included UTC students as well as current judges, attorneys, and the current superintendent.

This year, Howard came out on top.

“It was a very close competition. Tyner gave them a run for their money, and their team was mostly freshmen and sophomores, so they’ll be back next year with a vengeance. And we’ve been reminding them that they were so close this year, they’re going to be amazing as seniors,” said Laurie Melnik, Executive Director of the Southeast Center for Education in the Arts (SCEA).

“These scholarships are renewable, so when they get to UTC and maintain their grade point average, that scholarship is there every year. Many freshmen have lots of one time scholarships, and the second year they find themselves needing more money, so it was important to me for these scholarships to be renewable,” said Dr. Joyce Hardaway, the Executive Director of The Links Academy, who was responsible for approaching Chancellor Angle to partner with UTC to make this happen.. 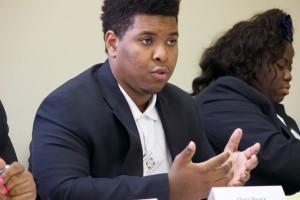 Hardaway continued, “We had a conversation about raising the ante. Generally, a good debater is also a good student, capable researcher, well spoken. And those are the students you want at your university. So, let’s make the University a carrot for them to really strive for.”

This year, there was also a new award named in honor of Melnik, a surprise to her at the presentation. Debate is a program that’s close to Melnik’s heart

“I became involved in debate as an undergraduate, and that’s where I found my voice, and it’s where things really started to stick for me in college. I’m a first generational highschool and college graduate, and my family was very supportive, but they didn’t really know how to support my academic career. That’s how I can relate, and I see this as a way to give back,” Melnik said.

Melnik continued, “I’m very open with them, and I share my story with them, right from the beginning, because I think it’s important for them to know why I’m involved, and also I want them to know that they can change their lives. Education was my opportunity to make a difference in my life, and I had some really passionate and patient educators who helped and inspired me. I want to help them to see the potential in themselves.”

The year long debate program prepared students to compete in parliamentary style debate, in which students are aware of the topic ahead of the time, but must be prepared to argue either side and adapt quickly.

“We’re very strategic in finding topics that they can relate to – on a school level, on a community level, and on a wider level, so they start to feel connected and engaged and like they can make change,” Melnik said.

Topics have included questions like “To make a community safer, which would be more beneficial, a community watch program or increased police presence?” and “To be college ready, is high stakes standardized testing important?” 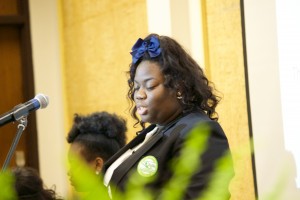 “This is a great way for students to build confidence, and as they become more effective communicators, you just see them have a different kind of drive, and they’re starting to ask different questions, like, ‘When I go to college…’” Melnik said.

As a part of the program, students also completed ACT preparation and went on four college campus tours.

“It’s important to help these students start thinking in terms of their college career, instead of just freshman year and sophomore year and so on, and we want to show them that we’re making this kind of investment for all four years, to help them achieve their goals. And they get excited, and start to see college as more than just completing a list of courses, as the chance to make positive changes,” Melnik said.

The tournament was made possible by The Links, SCEA, The UTC Chancellor’s Multicultural Advisory Council, and sponsored in part by The UTC Office of Equity and Diversity.

“The University, through Laurie, has embraced really this program. She has worked really hard, with these teachers at the school level, to help them understand the components of the debate and get the students involved and keep them motivated. UTC has just been a tremendous resource,” Hardaway said.