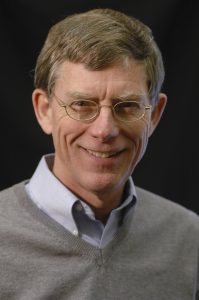 The Carrithers lecture series is designed to honor an outstanding scholar, educator, and mentor by creating a forum through which UTC alumni, students, and faculty can engage with the broader community to discuss controversies in public law and public life.

Dr. Carrithers began his career at UTC in 1970. As a member of the Political Science Department, he specialized in the history of political philosophy and in constitutional law and civil liberties while serving as Department Head an Adolph S. Ochs Professor of Government. A revered teacher, he was the first recipient of the UTC Student Government Association’s Outstanding Professor award and was also awarded the UT Alumni Association Teaching Award.

Presenting the inaugural lecture of this series is Dr. Steven Benjamin Smith, UTC alumnus ‘73. Dr. Smith’s presentation, “Democracy and Ambition: Abraham Lincoln on the Problem of ‘Towering Greatness’” will focus on Lincoln’s renowned “Lyceum Speech” of 1838.

“I am delighted that a former student of Steven Smith’s stature will be inaugurating this lecture series. Steven is a political theorist of substantial renown, and he has chosen a topic that has both historical and contemporary relevance,” said Carrithers.

Smith is currently a Benjamin Cowles Professor of Political Science at Yale University. After graduating from UTC with honors, he went on to the University of Durham, England and the University of Chicago for his graduate studies in Political Science. He is the author of numerous highly regarded publications including Spinoza, Liberalism, and the Question of Jewish Identity (awarded the Ralph Waldo Emerson Prize of the Phi Beta Kappa Society) and Modernity and Its Discontents.