Just after 9:30 A.M. on a humid May morning, more than 100 prospective college students crowded into the Card Auditorium in the Engineering, Math, and Computer Science Building on the University of Tennessee at Chattanooga (UTC) campus. But unlike the typical campus tour groups of high school students and their parents, these students arrived on school buses from their elementary school classrooms. These 5th graders had come to campus to learn how they might become Mocs in another 8 years, through a year-old UTC program, College Knowledge Now!—or CK Now! for short. 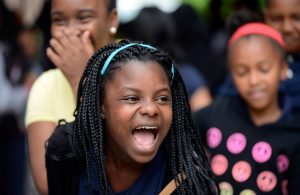 In the past school year, nearly 1,500 students from Hamilton County Schools or rural areas of nearby counties have participated in CK Now! For many, it was the first time that they’d set foot on a college campus. In a few hours, these elementary school students listened to current UTC students to learn about how they got to college, student athletics, and the pathway to post-secondary education. Because of the new Tennessee Promise program, which provides two years of tuition-free community college or technical school education free of charge to the state’s high school graduates, students have a new option to finance a college education or other career training.

In 2007 Sandy Cole and her team in UTC’s Center for Community Career Education started an after school program that prepares students at a nearby elementary school for college. “I’m a firm believer,” Cole says, “that kids in 5th grade can see themselves in college if they happen to visit a college.” Although camp-based opportunities such as UTC’s Youth University were already available to 1st to 6th grade students, those programs are often out of reach for low-income families,” she adds.

The original program, called Post-Secondary Awareness With Success (PAWS), serves 50 4th and 5th graders each year at  Brown Academy, a public school at the south edge of the UTC campus, and is facilitated by 60 UTC student mentors. Two afternoons each week during the school year, the mentors lead activities that help students learn more about college and help them with their schoolwork. There’s also a short program each summer.

One of those student volunteers was Jonathan Brocco, who started working with PAWS in 2009 as an undergraduate education major. When he decided to pursue a Master’s degree in Education at UTC, he took a position as a graduate assistant in 2014 working with Cole and, in his free time, helped organize PAWS and other related programs.

In the meantime, teachers at other area schools had learned about the PAWS program and wanted their students to have the same opportunities. Cole wondered how they could expand their program and reach more of the estimated 4500 disadvantaged 4th and 5th graders in Hamilton County.

To figure out their next steps, Brocco and Cole participated in Co.Starters for Causes, a business development course for non-profits and social entrepreneurs co-sponsored by Chattanooga’s Company Lab and Causeway, during the summer of 2014.  They soon realized that the best way to accommodate more students was to build a new program. They designed their new curriculum in the form of a one-day field trip, an orientation-style program that allowed 4th and 5th graders to visit UTC’s campus. During the day, they get a taste of college classrooms, dorms, and athletics – whetting their appetite for more. In January 2015, Cole and Brocco received a $15,000 grant from the Community Foundation of Greater Chattanooga to fund the program, which became CK Now! The Chattanooga Chamber of Commerce provided an additional $1,000 to help defray the cost of transportation.

Brocco’s enthusiasm is infectious. On this day, the tall, bearded recent UTC graduate started by asking students to write their own brief application essay, describing what they knew about college before they arrived that day. 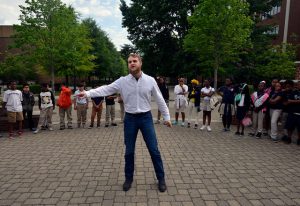 He told the students from Orchard Knob Elementary School and Hillcrest Elementary School of his own journey toward a college education. After several high school summers of working at a Little Caesar’s Pizza in Nashville, he realized that he wanted a different future. “I didn’t want to cut grass. I didn’t want to make pizza,” he says. Others might enjoy it, he admits. “But I wanted to do something where I could interact with people, where I could think.”

In between, he showed videos of other students talking about their postsecondary experiences. And he gave students basic information about their options, including technical schools, apprenticeships, 2-year degrees and 4-year degrees. He also described the application process and standardized tests such as the ACT. Finally he explained that financial aid, including scholarships, grants and loans, are available to help pay for college expenses. He introduced the Free Application for Federal Student Aid (FAFSA) form, a form that students use to apply for many of these financial aid opportunities.

Hard work, good grades, and good behavior are the keys to taking advantage of educational opportunities after high school, he added. A whole range of interesting career opportunities are available, he explained. “You are the only one who gets to decide what happens in your future.”

Though the chance to attend college is years away for these students, elementary school is the perfect timing for a college readiness program, Cole says. When founding PAWS, she was originally thinking about a program that steered middle school kids away from gang participation. But after conversations with a criminal justice professor, she learned that middle school was too late to intervene. “But I got excited about the opportunity to work with elementary school kids,” she says, an age group that her center hadn’t focused on previously.

“We wanted our students to think about the college track early,” says Etienne Easley, the Family Practice Specialist at Orchard Knob Elementary School, who organized this field trip for her students. With the smaller transitions from elementary school to middle school and then to high school, students can’t always see the bigger picture of how schoolwork and discipline fit together to support their passions and their goals, she adds.

Schools who bring their students to UTC for CK Now! have several options to customize the CK Now! experience with a set of “electives.” Options include “Understanding College Athletics” a question and answer session with UTC student-athletes, a dormitory tour, interactive career and college activities, and a technology session about coding and 3-D printing at the UTC Challenger Center.

“I can see by looking at the kids’ expressions that they’re learning,” Easley says. In the past students have said, “Well, I don’t think my mom can afford college.” But now,  they see options, she says. “They’re more hopeful.”

“How many of you are interested in being athletes?” Brocco asks. Dozens of hands shot immediately into the air. He then introduced three student athletes—women’s basketball players Moses Johnson and Queen Alford and tennis player Kayla Jones—who shared their experiences. The students peppered them with questions about what college was really like, including food and vacations, and asked them about day-to-day life as a college athlete. 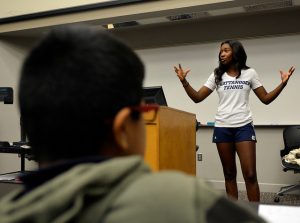 Trainers and coaches plan workouts and practice around a student-athlete’s class schedule. “Your agenda or planner becomes your best friend,” Johnson adds. Jones, a 2016 UTC graduate from Memphis, majored in biology and plans to go to dental school. Because of her course schedule and the number of laboratory courses she needed to take, her days often started as early as 5 A.M m. She’d often have practice on her own early in the morning before class, attend classes and laboratory courses, and possibly have other athletic training commitments in between. “I wasn’t done until 9 P.M., and I still had homework,” she says.

Grades and attitude are important as coaches are recruiting new student athletes, Johnson emphasized. All teams have academic standards that their players must maintain to keep their scholarships. “[Coaches] don’t want to invest their time and money into someone that they’ll just have to let go,” she says.

You don’t have to be an athlete to get a scholarship, they added. Jones also received an academic scholarship from UTC. Scholarships are also available in other areas such as music, Johnson adds.

Before they left, Alford, Johnson, and Jones took a selfie with the room, snapping the photo as the students chanted, “Go Mocs!”

After hearing from student-athletes, the Orchard Knob students took a walk through the heart of  campus past the University Center to Boling Apartments where they learned about campus housing and toured a dorm apartment. They asked UTC Housing’s Assistant Director Carling Wilson questions about food, roommates, housing costs, and even how students receive mail. 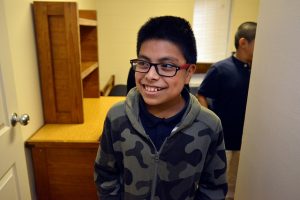 Outside the dorm, Orchard Knob students talked about the highlights of their CK Now! experience. Arianah McGlocton and Zania Hendrix both enjoyed touring the dorms. These two girls and their classmate Demaishawn Earls especially liked the session with the UTC student athletes.

What was their biggest lesson from the day? “You have to study hard and get good grades,” Demaishawn says. Good grades can help you get a scholarship, Zania adds.

On the walk back from Boling Apartments, two other boys talked about their career goals and how college could help them. Victor Jackson, age 11, wants to study science and criminal justice with the goal of being a police officer. “I also like wrestling so that I can learn to tackle criminals,” he says. Eleven-year-old Brayden Moore loves science, particularly studying animal and plant cells. “I’m going to get a 4.0 [GPA],” he says.

One of the initial challenges with this CK Now! program was recruiting schools and figuring out how to make the program financially sustainable, Brocco says. The program charges a nominal fee— $300 for up to 100 students—for the field trip, funds that go back into supporting a range of college readiness programs, such as PAWS and CK Now!, at the Center for Community Career Education. “That was our dilemma. We couldn’t get major grants. We’d get some corporate sponsorships here and there.”

But the cornerstone of PAWS and CK Now! is the involvement of UTC students. Among the dozens of volunteers who help with the PAWS program each year, several undergraduate education majors serve as classroom coordinators each semester. They plan the activities and organize the program and receive a small scholarship that covers their textbooks.

Working with PAWS and later with CK Now! was an essential step for Brocco, who has long been interested in teaching low-income students. The time in the PAWS program helped with his education training, he says, allowing him to connect with diverse students and help them work through their challenges. A lot of new student teachers struggle when they learn that a student has been arrested or is facing abuse at home, he says. His classes at UTC helped him learn how to teach history, he says, but PAWS and CK Now! prepared him for the counseling part of his role as a teacher.   “It’s about connecting to kids and building relationships,” he adds.

Brocco will be taking all he’s learned at UTC and bringing it to Nashville this fall. He will be teaching U.S. History to 8th graders at Nashville Prep, a charter school in West Nashville.

PAWS volunteers often help with CK Now! field trips. On this day Brocco’s brother Cameron, also a PAWS volunteer, shared his experiences as a biology major, who plans to attend medical school. Sloane Botts, a PAWS volunteer and senior early childhood education major, recognizes herself in many of the PAWS and CK Now! students. “I came from a community where it was not the norm to want to leave and go to school,” she says.

“It’s great experience for the future,” Brocco says. “When you see a 5th grader and a college kid walking down the street together, that’s where the magic happens.”

Check out our Flickr album to see more from the CK Now! program.