Inside the mind of a marathoner: Professor researches emotional states of long distance runners

Legendary long distance runner and three-time Olympic gold medalist Emil Zátopek once said, “If you want to run, run a mile. If you want to experience a different life, run a marathon.”

For many runners, completing a marathon is a life-changing accomplishment. But what happens during the race that makes finishing it so monumental? Can managing mental as well as physical energy during an endurance race make it easier to finish such a physical feat? 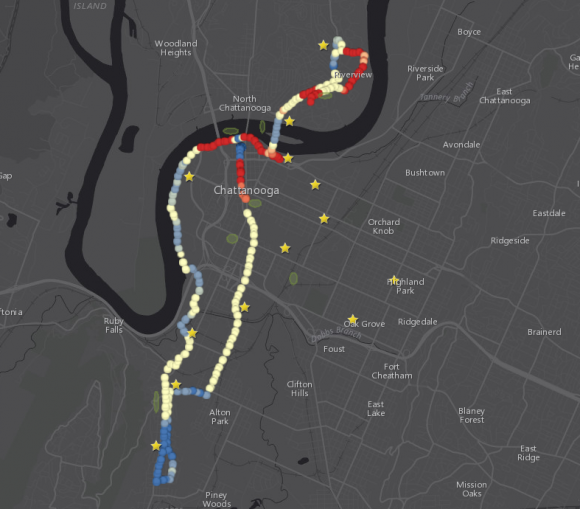 GIS map of the runners’ data.

Bailey, a UC Foundation assistant professor of health and human performance, selected a diverse group of 10 runners with varying athletic experience and skill levels who had signed up to run the Chattanooga Marathon last March.

Some were first-time marathoners; others were seasoned athletes. Many had spent months training for the race. A few had done just a few practice runs and were hoping for the best.

Each runner wore a five-channel, wireless electroencephalography (EEG) headset to record their brain waves during the entirety of the race. The small headpiece relies on Bluetooth to transmit data as it scans the brain.

The headset measured the runner’s mental state twice every second. At the end of the race, Bailey had 50,000 rows of data for each runner.

To make sense of the overwhelming amount of information, he averaged out 10-second increments and plotted each data point using a geographic information science (GIS) map.

“Anxiety really showed up in two spots,” Bailey says. “Right at the beginning where the runners were nervous while waiting for the gun to go off and when they were coming up the hill by Ross’s Landing. I’m going to be doing more analysis to see how going up in elevation impacted the runners.”

Though it might seem impossible during a grueling, physically demanding activity, runners can reach a state of relaxation during a marathon.

“There was a lot of anxiety at the beginning of the race,” Bailey says, “but after about a quarter of a mile, they all started getting into their zone and relaxing more. Many of the runners went in and out of a state of relaxation throughout the race.”

Bailey also discovered runners entering a meditative state near the end of the race.

“It’s like ‘zoning out,’” he explains. “It happens when we daydream or we’re really tired. Around mile 18, many of the runners were in a pretty heavy meditative state from that point on. It’s like their minds and bodies were on autopilot, just pushing through to the finish.”

A tale of two runners

“I noticed that the more experienced runners had less variation between the two states,” he says. “The color on their graphs was mostly white, which signals staying in the middle range. They also had fewer spikes and valleys in their data.”

The person who had the fastest time was not only the most experienced runner but also had very little frontal asymmetry, Bailey says.

“His graph was white almost the entire time, signaling that he was more mentally stable throughout the race. It was most likely because he had run a marathon before and knew what to expect.”

When Bailey looked at the graph of a first-time marathon runner who struggled later in the race, he found “much more color.”

“It shows that he was putting in much more mental effort to make it through. He didn’t enter a meditative state as often as the more experienced runners. His mental state likely got worse near the end because he expended so much energy during the first half of race. Your brain uses as much energy as your muscles do,” Bailey says.

Bailey is still analyzing the data, but he can see his research being useful for race directors as they design courses. Where the runners were on the course often dictated where their mental state landed.

“Research has shown that green spaces tend to be more restorative, so when runners were in greener areas of the race, they tended to feel relaxed,” he says.

“In contrast, at mile 22, runners were surrounded by buildings with a slow incline. You can see straight up the street so it feels like there’s no end to it. For a runner, it feels like misery. Everyone went red there and anxiety pops up for a few.

“Directors could use this type of data to design courses that help participants feel more relaxed and conserve energy.”

Tagged with: Andrew Bailey Department of Health and Human Performance

2 Comments » for Inside the mind of a marathoner: Professor researches emotional states of long distance runners