Paying it back: Veterans receive college credits for their military service 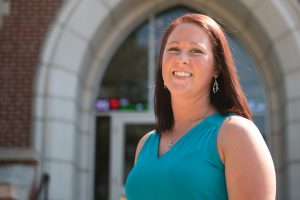 Melissa Speed initially joined the Navy after high school because she didn’t really want to go to college.

She served active duty out of Virginia for seven years. During that time, she worked in information technology, helping with troubleshooting, satellite communications, and networking.

When Speed returned to Chattanooga, it seemed natural to her to enroll at the University of Tennessee at Chattanooga. She wanted a useful degree that could land her a job and jump-start her career.

Yes, she was starting out on campus a little later in life but already had a decade of real-world experiences and professional training.

Speed is just one veteran receiving course credit for her time in the military, merging the professional development of her past with scholarship on campus. The credits she’s received, including a course in computer science, will help her earn her degree in accounting faster.

Funding for the program comes through Tennessee Higher Education Committee’s (THEC) Veteran Reconnect grants. The money promotes the assessment of prior learning for veterans returning to college, improving the transition from military service to postsecondary education.

Last fall, U.S. News and World Report ranked UTC among the Best Colleges for Veterans, in part because the school has been proactive in recognizing the skills of student veterans.

“UTC already approves military training as elective credits, which many institutions do not,” Wiram says. “By doing so we hope to improve the accreditation process so more veterans in Tennessee will take advantage of the new initiative.”

Other state institutions are following UTC’s example. The school is among 13 colleges and universities in Tennessee chosen to receive funding and program support through Veteran Reconnect grants.

The program is part of Gov. Bill Haslam’s Drive to 55 initiative to increase the number of Tennesseans with a postsecondary degree or credentials to 55 percent of residents by 2025.

“In Tennessee, there are an estimated 83,000 veterans with some college credit but no degree, and we are committed to making it easier for them to transition into higher education and graduate,” Haslam explained in a prepared statement.

“Veterans bring valuable experience and learning from their time in the service, and through Veteran Reconnect, we are helping them turn that experience into credit, earn postsecondary degrees, and move into quality jobs after serving,” he continued.

Wiram explains that UTC “has been the gold standard in veteran services and programs in Tennessee for a few years now.”

UTC’s success is because of willingness to collaborate among multiple departments on campus. The Division of Student Development, the Office of the Dean of Students, the Records Office, and the Student Veterans Organization have all come together to ensure that the transition from military service to student is simplified and that our veterans are graduating.

Those who complete the program are designated “Green Zone allies,” volunteers available as a source of support to student veterans and active-duty members.

Speed also notes how supportive UTC is to student veterans, from providing a lounge where she can connect with other student veterans to how smoothly the university works to provide financial assistance such as the GI Bill to veterans.

“UTC is awesome,” Speed says. “I use the [Veterans Benefits Administration] benefits. They pay for me to go to school.

“I’ve heard where at other schools, [fellow veterans’] classes got dropped because they weren’t paid on time. That’s horrible. However, UTC is on top of it. I have nothing but good to say about the veterans programs here.”

UTC recognized by U.S. News and World Report for work with student veterans