by Communications and Marketing September 25, 2017 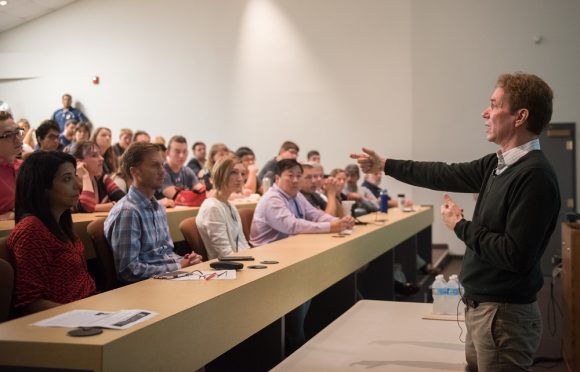 “To do what mankind has not done before.” Sounds a bit like the opening to a science fiction series, but Dr. Paul McConnaughey and his NASA colleagues see it more as a vision statement.

“The importance of deep space exploration is the understanding, … extending the human presence into space to establish new knowledge,” said McConnaughey, associate director, technical division, at NASA’s Marshall Space Flight Center in Huntsville, Ala. “There will be advances to scientific knowledge and our understanding of where man could go in the future.”

McConnaughey visited UTC to discuss the importance of advanced technologies to support NASA’s missions to Mars and the deep space beyond. His presentation was sponsored by the UTC College of Engineering and Computer Science and the UTC SimCenter.

“Mars is fascinating because it’s probably the only planet that is reasonably compatible with the human physiology,” said McConnaughey. “It’s not too hot; it’s not too cold. In terms of nearness to Earth, it’s the closest thing we have to a Goldilocks planet. Right? So it looks like it’s survivable with respect to temperatures, environments and also has potential resources by which we can generate oxygen and possibly propellant there. It’s the one that’s the most feasible for us to explore.”

While NASA continues to rely on graduates from the STEM disciplines—science, technology, engineering, and mathematics—in preparation to send humans to the Mars, McConnaughey said the long-term nature of a space flight to Mars requires more than just technological skills.

“We can actually use arts folks,” said McConnaughey. “The training is basically still sciences, applied sciences, engineering, and more importantly some hands-on activity, but we need the ability to communicate and get along with people—so it’s very much a well-rounded, capable engineer or scientist.”

Matt Joplin, a UTC electrical engineering graduate student, attended the presentation after completing an internship with SpaceX, the first private company to successfully send and return a spacecraft from low orbit. He hopes to continue a career in space exploration.

“I have always been inspired by NASA,” said Joplin. “I had the internship with SpaceX and I am actually excited about deep space exploration with humans. We haven’t really been doing that since the ’70s, since Apollo, and the moment is right to start taking next steps to push the envelope.”

NASA is developing technology to set the necessary assets to support human survival on Mars in place, including housing, energy, and life support resources. Beyond the Mars missions, McConnaughey looks for interstellar exploration that will take humans even deeper into space. To do so will take partnerships between government-supported programs and commercial space exploration ventures, like SpaceX.

“Elon Musk (founder of SpaceX) is a big inspiration to me,” said Joplin. “But NASA is like the other side of that envelope. They’re the people who are looking at all the small details and all the challenging questions, and I think that collaboration between the two will lead to something really great.”

McConnaughey projects that the future of space exploration will be different from the Apollo days and America’s race to reach the Moon before the Soviet Union.

“Space exploration gives us a sense that there is a possibility of more beyond us,” said McConnaughey. “As opposed to a no-holds-barred march to the moon in a race, I think you’ll see more of an evolution in space exploration, more of a steady march of humanity to Mars. We will move toward Mars as a Space-Era species. It goes beyond what we had in the Apollo experience. Instead of being U.S.-centric, I think it will be human-centric.”