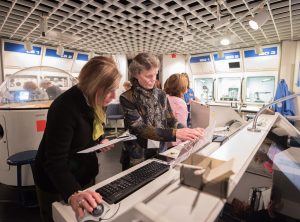 Sue Culpepper, director of the UTC College of Business Student Success Center, left, and Debbie McKee work the navigation controls during a Mission to Mars at the Challenger STEM Learning Center. 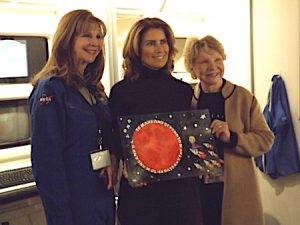 June Scobee Rodgers, far right, with her daughter, Kathie Scobee Fulhgam, on the far left and Nancy Prebul in the center.

The sudden release of E. coli, strep and wart virus is handled quickly and efficiently.

A decision is made to plant watermelon, garden peas and broccoli for food.

But most importantly, the landing on Mars is smooth and uneventful instead of slamming into the ground like a supersonic bag of wet cement.

“It was intense,” says Sue Culpepper, director of the UTC College of Business Student Success Center.

Of course, Culpepper and her 14 crewmates weren’t actually on a mission to Mars but, while inside the nifty-named Mars Transport Vehicle, they treated it with a sense of serious purpose, well, except for the frequent bursts of laughter.

The group, a blend of movers, shakers and well-known women in Chattanooga, headed into pseudo-space on Thursday, Jan. 25, at UTC’s Challenger STEM Learning Center. They were invited by June Scobee Rodgers, the widow of Commander Richard “Dick” Scobee, who died in the 1986 Challenger explosion. The 32nd anniversary of that event is Sunday, Jan. 28.

The simulated Mission to Mars is one of the STEM Learning Center’s big attractions, with visiting groups of elementary- to college-age students, adults, corporate groups and others manning such essential stations as navigation, medical, life support and communications for what, in real-life, would be a two-year mission to swap places with a crew already living on the Red Planet.

Rodgers has hosted such events at Challenger centers across the country and internationally, but this was the first time she has held one in UTC’s STEM Learning Center and also the first with only women. She had more in mind than female bonding and fun, she says.

“These are all women role models — bankers, scientists, lawyers, medical doctors — and it would be terrific if there’s just one child out there who says, ‘Hey, I can do that,’ and they’re inspired,’” she says. “It happens all the time.”

Although the network of Learning Centers focuses on space exploration and its accompanying technology, STEM (Science, Technology, Engineering and Math) reaches so much farther than that, says the Perry Storey, executive director of the UTC STEM Learning Center.  Helping school-age girls understand that is crucial, he adds.

“STEM is not one thing; STEM is so many things. One of the main things we’re about is trying to introduce young women to that fact,” Storey says.

The center’s Mission to Mars doesn’t hold back on its STEM. One station employs engineering to build a probe to land on one of Mars’ two moons; another scientifically weighs samples of rocks and soil from Mars. Navigation utilizes math and measurements to aim the Mars Transport Vehicle in the right direction, and Life Support must quiz and medically examine the rest of the crew to make sure they’re not freaking out.

Vicki Cherry, a financial advisor at Stifel Financial Corp., mans the robotics station and, at first, has a bit of a problem trying to pick up flasks with a robot arm; they tend not to go where she wants. At the end, though, she’s able to manipulate the arms and easily put the flasks in the right places. The task was fun, but a bit difficult at the start, she admits.

“I had to read my directions,” she says with a laugh.

Culpepper and her partner, Debbie McKee of McKee Foods, were manning the navigation console so “we had to make sure we got there.”

Despite the acute responsibility for making sure the spacecraft didn’t miss Mars and fly off into the universe, Culpepper says the experience “was great. I thoroughly enjoyed it.” 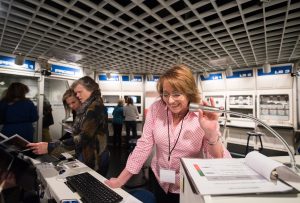 Cindy Sexton mans the communication module, talking to both the crew and Mission Control on Earth. 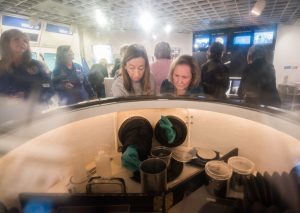 Judy Spiegel, left, and Jackie Mohney use the sealed glove box to test rock and soil samples from Mars. 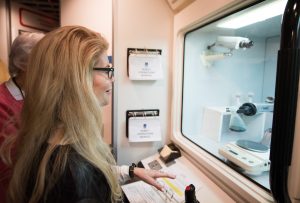 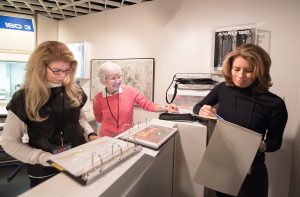 Vicki Cherry, left, and Sharon McKee, center, talk with Nancy Prebul, who is documenting the Mission to Mars through her art 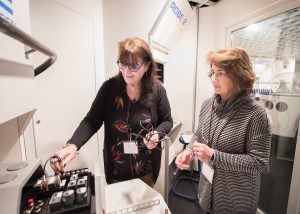 Ellen Heavilon, left, and Lisa Frost build a  probe to land on Phobos, one of Mars’ two moons. 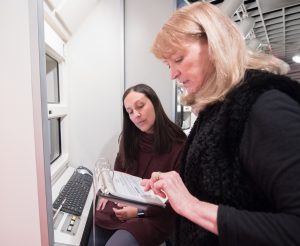 Gayanne Burns, right, and Jennifer Patel are the medical team, making sure the rest of the crew isn’t stressing out on the Mars mission.