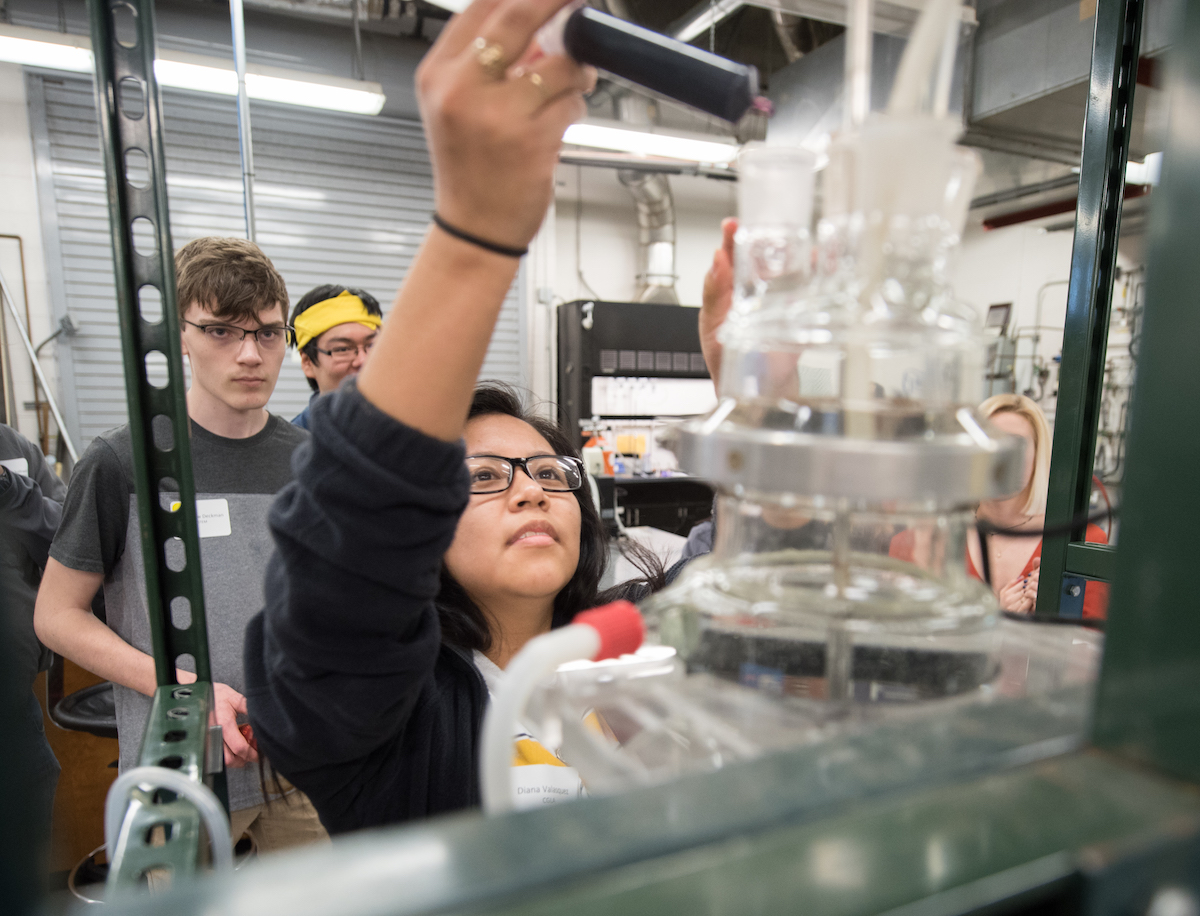 Weston Braddock looks around the everyday world and sees something missing.

“About the only thing we have is Roombas,” he says, referencing the Wi-Fi-controlled machine that thumps and bumps around the house, sweeping floors and vacuuming carpets.

“That and garage doors,” he adds.

An interest in designing and working with robots brought Weston, a sophomore at Ivy Academy in Soddy-Daisy, to UTC on Saturday, Feb. 24, to attend the Open House in the College of Engineering and Computer Science. He was one of about 60 high school students from around the Chattanooga area who attended the day-long event, held in Engineering, Math and Computer Science building and the SimCenter.

During the Open House, students witnessed demonstrations of the Chem-E car, which rolled a little over 30 feet on fuel made from the reaction of several chemical. They tried to control flying drones using cellphones and computers —the cellphone-driven ones skittered across the floor or slammed into netting like big mosquitoes while the computer-driven ones flew up and around the room with little problem.

Physically showing the different ways in which an engineering or computer science degree can be used may be a more effective way to get the students excited about the fields than sitting them down and talking to them, says Daniel Pack, dean of the College of Engineering and Computer Science.

“This is a way to allow them to discover things on their own,” he says. “It helps them appreciate it more.”

Sara Sosebee, a junior at Ringgold High School, hopes to be an architect, so she came to the Open House to watch a demonstration on civil engineering.

“I really like seeing how everything fits together,” she explains.

To some, a woman who wants to be in engineering may seem odd, and Sara says she has gotten that reaction a few times, but not many.

“They don’t really say anything too bad. Usually they just smile,” she says.

Daniel Locke, a senior at Soddy-Daisy High School, is interested in industrial engineering because “it’s optimizing processes and I really like when things are really efficient and streamlined.”

“I’m mildly OCD and that kind of follows how my brain works,” he adds with a smile.

His father is an electrical engineer at TVA, he says, “so I kind have grown up with engineering my whole life.”

Weston says he was turned on to robotics after attending a camp last summer at the Volkswagen plant and watching its robots at work.

“Just controlling one of those big beasts was like, ‘Wow!’” he says.