Magazine of Southern perspectives, ‘Catalpa,’ calls for pitches and submissions

What: Catalpa seeks pitches and submissions for Spring 2018.

When: Deadline to submit is Feb. 16

Unexpected, unconventional, unorthodox are some of the words used to describe a new publication from the graduate program of UTC’s English department. Titled Catalpa the publication was inspired by online and print magazines like Bitter Southerner, Oxford American and Orion.

The staff named their magazine, Catalpa, after the tree commonly found in the south because it “offers a metaphor for the complexities of the south with its deep roots and diverse, beautiful troublesome history.” On their website they explain that European settlers once thought the tree’s roots were poisonous but at other times used those roots to treat snake bites or cure whooping cough.

“The idea is to craft a magazine whose roots are not only in the South (which we recognize can be a fraught term in today’s social and political climate) but more specifically in Chattanooga,” explains Catalpa’s current editor, Drake Farmer, in an interview with Connections, UTC English’s blog. Read more from that interview.

“Since this is our mission, so to speak, we are particularly interested in writing about, and telling the stories of, our community. I think that translates to us pursuing a fairly wide audience—we feel that Chattanooga is the sum of its voices.” 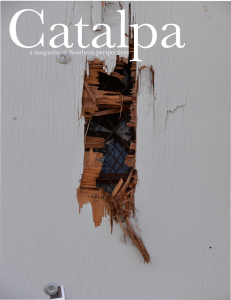 The annual publication is currently seeking submissions for its Spring 2018 issue. The deadline to submit is Feb. 16.

“I would love to see some smaller pieces that focus on a single idea, meditation, or fragment concerning the South/Southern history,” Farmer says. He’s particularly interested in photo essays because they would “add a lot to the magazine” he adds.

Read their call for submissions.

Do you have a story to tell? They want to hear it.

You don’t necessarily have to be a writer to submit a piece—or idea—to Catalpa.

“If you have a great idea, but need a little bit of help getting it out into the world, reach out to us,” Farmer says. “We’ve got a friendly staff, and we’ll do what we can to make the process a great experience for potential contributors.”

Last year, the magazine’s inaugural issue featured an exploration of St. Elmo’s spirit through the neighborhood’s annual parade for Corgis, the retelling of a 1967 UFO sighting in Nashville and the story of UnifEd, a local nonprofit organization, among other local stories, ephemera and musings.

Check out their full publication.