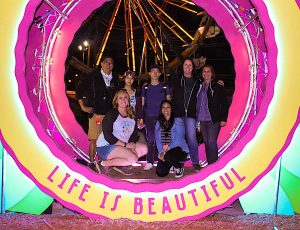 Life Under the Wheel currently has relationships with two music festivals: Life Is Beautiful in Las Vegas in September and Okeechobee Music & Arts Festival in Florida in March. To enroll as a nominee or nominate someone, go to: https://www.lifeunderthewheel.org

Bathed in blue light, eyes closed, a smile on his face, Calvin Huang bobs his head up and down and dances as he grooves to the music.

He’s standing in a crowd at Life Is Beautiful, a three-day music festival in Las Vegas that featured Chance the Rapper, Muse, Lorde, Wiz Khalifa and Gorillaz.

“This weekend has been fantastic to me. It was really nice to be able to, like, sit back and relax,” says Huang, who suffers from a very aggressive, inoperable brain tumor.

Free of charge, Huang and his girlfriend attended Life Is Beautiful last September, guests of a program created by a UTC graduate and his business partner. Known as Life Under the Wheel, the program paid the airfare, meals and other costs for the applicant and a friend, while the festival provided free tickets, VIP access and paid for his lodging.

It was Life Under the Wheel’s first chance to do what it was created to do: Give someone with a serious illness a chance to attend a music festival of their choice and get away, at least for a while, from the dark cloud hanging over them.

“It literally hit me over the head one night while I was lying in bed. I thought that there was a potential need there; it seemed to be a natural fit,” says Evan Gross, who graduated from UTC with a bachelor’s in political science in 2006 and a master’s in public administration in 2008.

A lover of music and musician himself, Gross, who now works as learning management system administrator in the Walker Center for Teaching and Learning, has spent more than a decade in the music festival business, handling such tasks as wristband identification and box-office operations. He used those contacts to get Life Under the Wheel up and running.

“Through my work in festival industry I’ve been able to grow into a progressively larger role to where I have access to a lot of the top managers of these festivals. It’s really a small industry, believe it or not,” he says.

For help, Gross called on his friend Elizabeth Pikaart, who also has a long-standing background in festivals and now works full-time in the industry. She was all-in from the start.

“We wanted to help people who need a weekend to just disconnect and relax and listen to music and feel that kind of love and welcoming energy that is in the festival world,” she says.

Life Under the Wheel is technically a nonprofit grant program funded by donations from individuals. Applications and nominations are taken at the program’s website: lifeunderthewheel.org. It costs about $10,000 to help each person attend festivals, Gross says.

With one festival under its belt, they hope to approach nonprofits and commercial companies this year for donations, Pikaart says. Heavy promotion of Life Under the Wheel on social media and other avenues also is key to get the word out, she adds.

“My job over the winter is to try to get it out to more media outlets and also to, for example, cancer support groups, hospitals, social workers. That’s the best way to target our sort of clientele, go directly to the people interfacing day to day with them.

“Since we are so new, people still don’t know what we are, who we are, so it’s about getting it out there, getting more exposure so more people know about it and we can help more people,” she says.

To be eligible for Life Under the Wheel, applicants must submit a diagnosis verification form then go through an internal review process, Gross says. For the first go-round, the program received seven applications, he says, and making the final choice “was a tough decision. It was very difficult. We’d like to fund them all.”

The hope for 2018 is to send four or five people to festivals around the country, Gross and Pikaart say.

Huang, a software engineer in San Francisco, first heard of Life Under the Wheel through a member of his cancer support group.

“When I first discovered my condition, the doctors didn’t think it was something very serious,” he explains. “After a little bit later, we found out it was extremely serious and that was extremely scary for me.

“Ever since then there have been occasional instances where I’ve been kind of having sort of an existential crisis. During those times, music helps me break out of my negative fright, sort of calm myself down.”

Being able to attend Life Is Beautiful with his girlfriend gave him “a chance to share this amazing experience with someone that has never been able to experience it before.

“And I don’t know if I’ll get another chance.”

Tagged with: life under the wheel