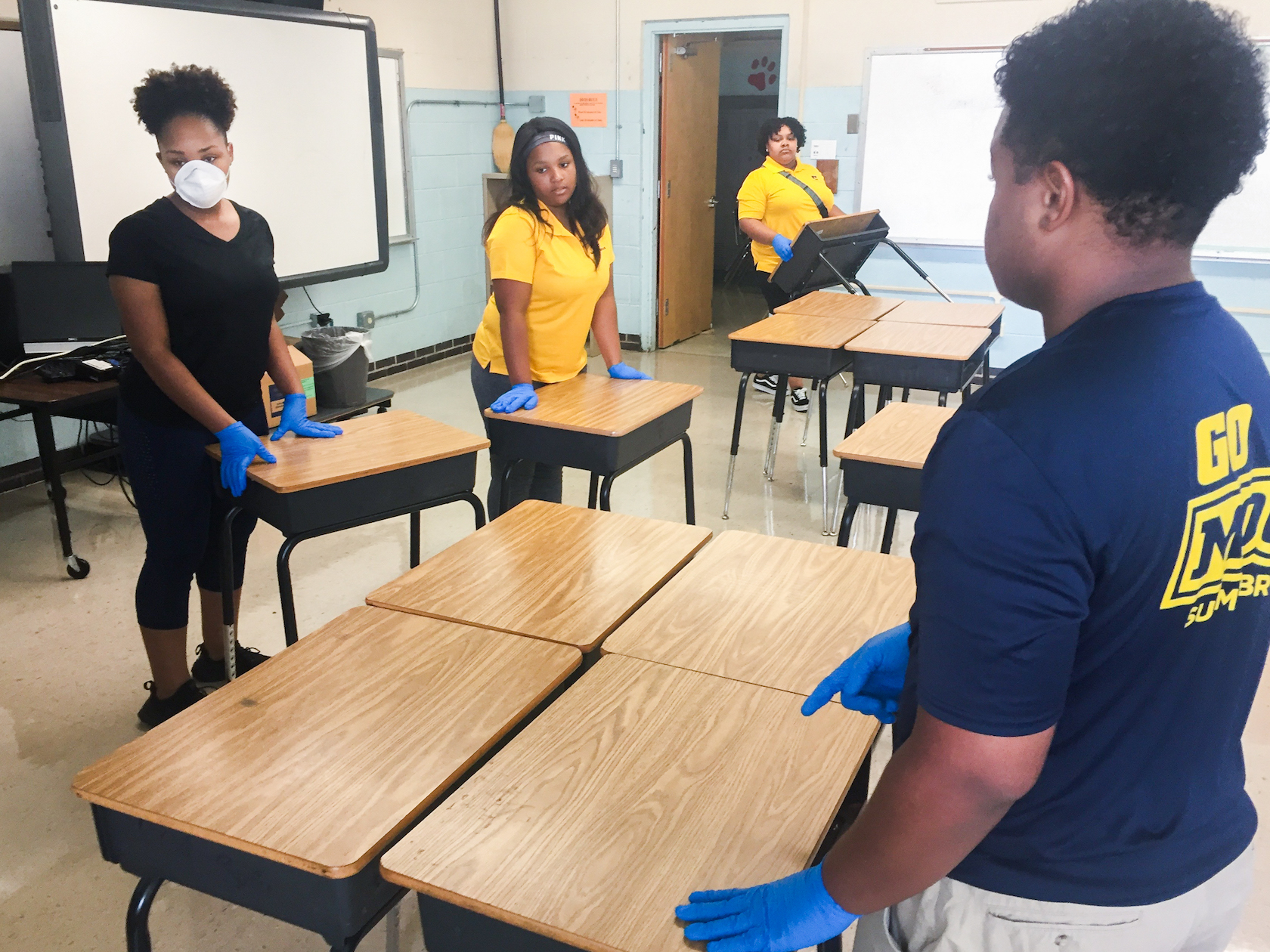 Le’Nericka Bailey, in the mask, works with, clockwise from right, Shelly Gilmore, Gabby Coopwood and Quintonious Smith to set up desks and chairs in a Brainerd High School classroom.

The hall in Brainerd High School is crammed with desks and chairs, metal cabinets and box after box of miscellaneous stuff, all pulled from classrooms along the hall. A narrow path squeezes through the center.

Inside the emptied rooms, students from around Tennessee—many wearing blue Mocs T-shirts—are steadily working. They scrape paint from the cinderblock walls. The smell of Pine-Sol fills the air as they wipe down walls, tables and countertops. They haul desks and chairs around.

Le’Nericka Bailey, wearing a surgical mask, carries small desks into a classroom ready for a return to normal. Quentonious Smith wrestles a load of stacked chairs through the door. They help organize the desks and chairs into even rows.

In other rooms, Karrie Melton, Takayla Spearman and RyKiedra Finley use handheld scrapers to strip paint off the wall in tiny flakes.

This maelstrom of activity, plus yardwork outside the building, is part of UTC’s Summer Bridge program, a five-week crash course of credit-earning classes, campus tours, community service and, yes, just plain fun for 27 incoming freshmen.

“It helps me get acclimated to the campus. I’ll already know where everything is, so I won’t be looking for my classes in the fall,” says Gilmore, a graduate of Germantown High School outside Memphis.

Each student must meet certain requirements, including ACT scores and high school GPAs. They must be the first person in their family to attend college and must be financially eligible for Pell grants. They don’t pay a dime for their time in Summer Bridge and actually receive a $200-a-week stipend.

With emotional support from their proud families, Summer Bridge teaches the students important lessons on how to handle the move from high school to college, says Dr. Kim Wingate from the School of Education and one of the program’s directors. The move could be difficult for them because there’s no one in their immediate family who is familiar with the ins and outs of college and can tell them what to expect, she says.

“We give them the tools, the resources to succeed at UTC,” says Mo Baptiste, one of the program’s directors and executive director for student development. “Our job is to lay that foundation for them before the fall, for what life is going to be like after they get on campus.

Community service is included in Summer Bridge because “we want them to understand that it’s bigger than them, that it’s not just about them. It’s giving back to the community that has nurtured them,” he says.

Melton, a graduate of Oak Ridge High School who will major in early childhood education, says the work at Brainerd High and other places around town helps her “get more involved in the town, not just the school, and this helps me be aware of where the help is needed.”

Outside the school building, a group of four guys empty several bags of mulch then use bright-red rakes to spread it around. It’s about 9:30 a.m. on Saturday and, when asked if they knew they were going to be doing yardwork this morning, the answer is a chorus of “No,” “Uh-uh” and laughter.

A couple of weeks into Summer Bridge, the quartet say the amount of work they’re putting in adds up, but it also means they’ll be better prepared for the frantic crush of fall semester.

“It’s getting us to make sure we’re doing our stuff early, so it’s not like, ‘Oh! I can just chill then get all my work done,’” says Deontey Mosley, a graduate of Power Center Academy in Memphis.

“I’ve learned how to communicate with people, especially people I don’t know,” say High, who plans to major in mechanical engineering. “I’ve learned how to work together, go out and do things as a group, whether it’s studying or community service like we’re doing right now or just going out to have fun.” 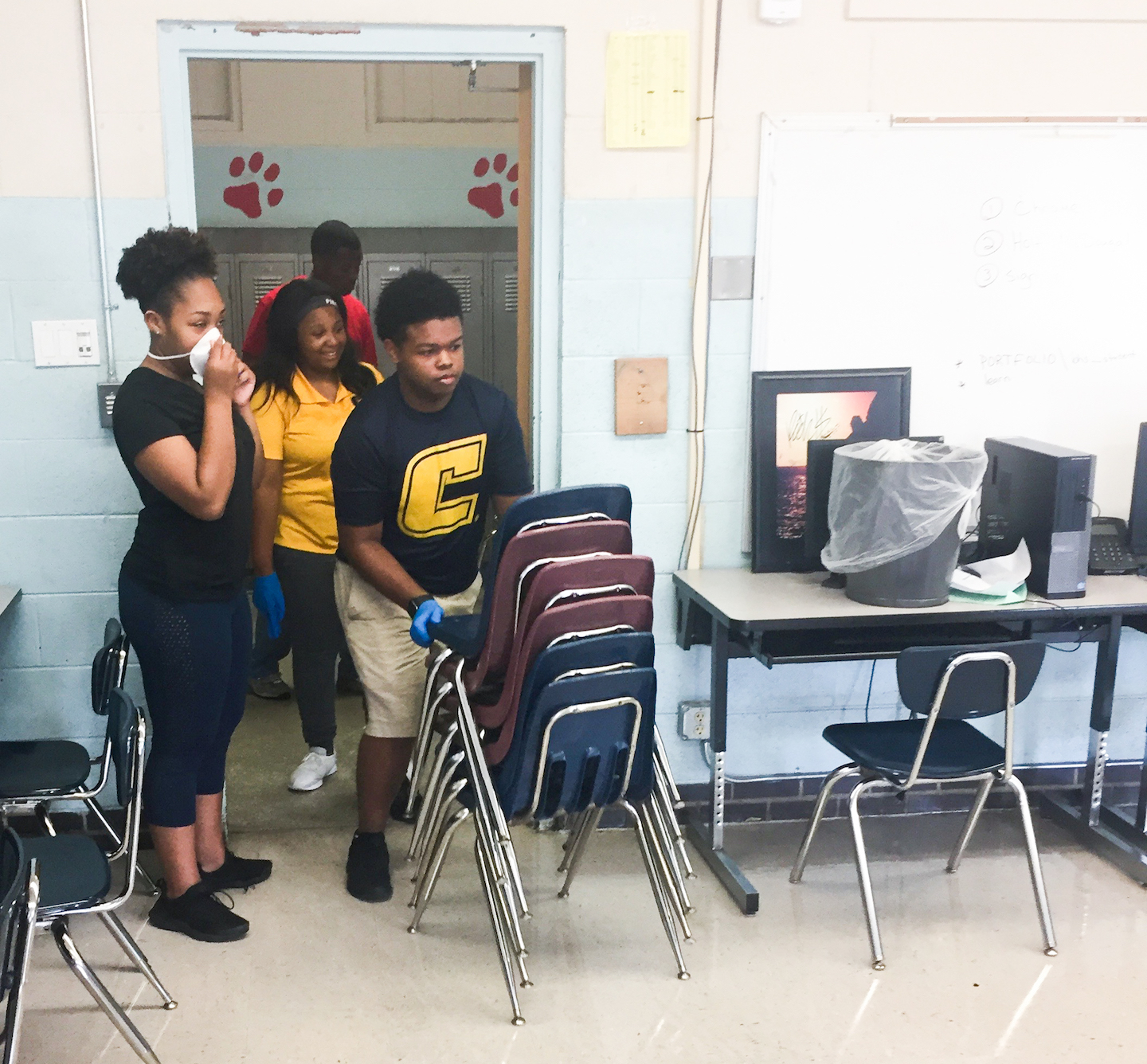 Le’Nericka Beasley, left, stands aside as Quintonious Smith pushes a stack of chairs into a Brainerd High class. Shelly Gilmore, a mentor from UTC, watches from the back.

After spreading mulch outside, from left, Asher Isaac, Deontey Mosley, Josiah High and Josh Woods head back inside. 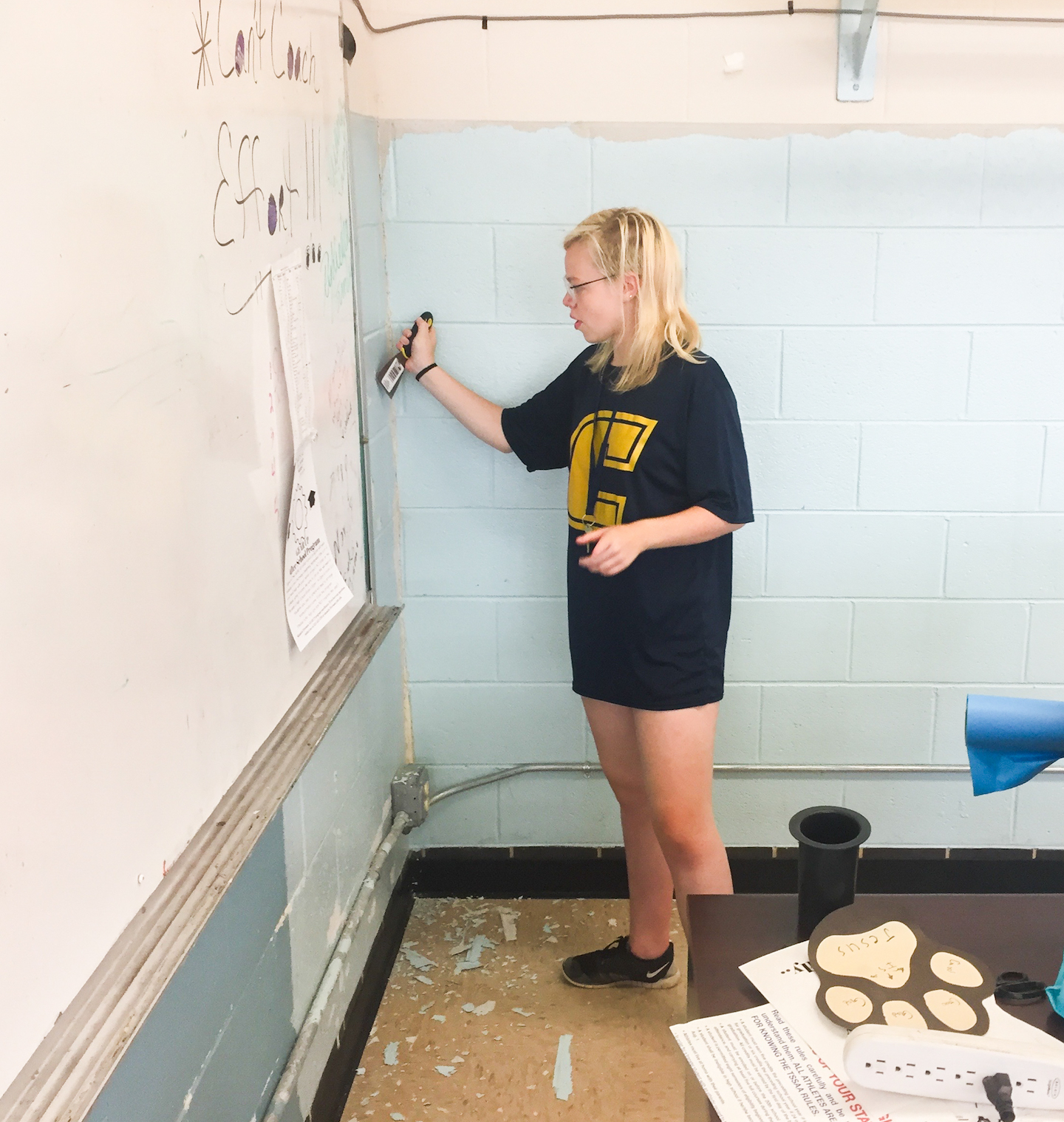 Tagged with: bridges bridges beyond the classroom summer bridge