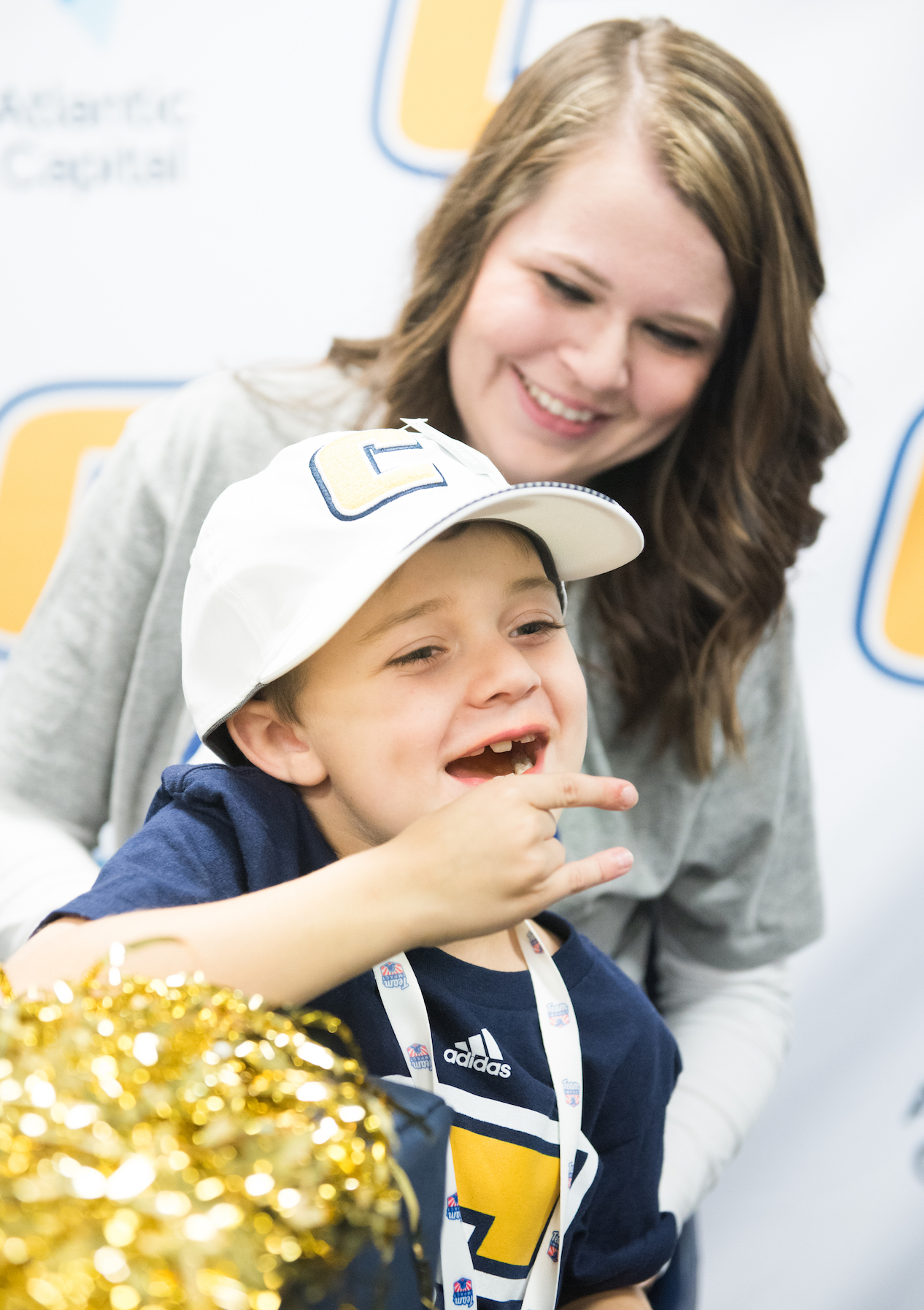 “For him to be able to tell everybody, ‘I go to UTC and I’m part of the cross country team,’ that’s just a dream come true,” says Katie Smith, the mother of seven-year-old Levi.

Mark Britt is trying to pry a response out of seven-year-old Levi Smith, but the vault is locked.

“What’s the matter?” asks Britt, a member of the UTC cross country team.

“This is your big day. You shouldn’t be scared,” Britt replies.

Britt is right. This is a big day for Levi, who lives in Rock Spring, Ga. He is officially being “drafted” as a member of UTC’s track and field/cross country team. Wearing a Power C cap and T-shirt, Levi doesn’t say much through most of the “signing ceremony” in McKenzie Arena.

It’s understandable; most seven-year-olds aren’t used to TV cameras, the clicking of multiple digital cameras and a host of people staring at them. About all he’ll say is “it’s great” to be a UTC Moc.

He was able to join the team through the work of Team Impact, a Boston-based nonprofit that connects children facing serious or chronic illnesses with college athletic teams. Levi was diagnosed with Duchenne muscular dystrophy when he was 2.  There is no cure for the severe form of the terminal disease, but it can be treated.

“The child joins the athletic team and the student-athletes join the child’s support team. Throughout the journey, the child gains strength, camaraderie and support while the student-athletes experience lessons of courage, resiliency and perspective they can’t learn in a classroom,” says a news release from Team Impact.

Katie Smith, Levi’s mother, says she contacted Team Impact after learning about it  through a friend whose daughter found a team with the organization’s help. Levi can’t play sports, but he can still participate in the team, she says.

“For him to be able to tell everybody, ‘I go to UTC and I’m part of the cross country team,’ that’s just a dream come true because a few years ago, when he was diagnosed, that was something that was taken from us,” Katie Smith says.

She also thanked the UTC team for making her nine-year-old daughter, Madison, part of the experience.

“She takes a backseat a lot to him, but they made sure to incorporate her just as much as him.”

Levi and his family have attended a couple of practices and a cross country meet, team coach Andy Meyer said.

“We’re looking forward to establishing this relationship with them. I have a feeling they’re probably going to teach us a lot more than what we can ever give them,” he says.

Members of the track and field/cross country team attended the news conference to announce Levi as a member of the team. “He usually has a lot of energy,” Britt says.

Levi is the third youngster to be “drafted” by a UTC team through Team Impact. The men’s basketball and football teams also have members that came through the nonprofit.

Katie Smith says her son has always been interested in all types of sports.

“When he was six weeks old, he’d watch Braves game while sitting on his Grandpa’s lap,” she says. “His eyes couldn’t focus, but …”