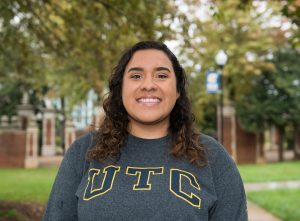 About 25 percent—or approximately 2,200—of UTC undergraduates are first-generation college students. They are part of a highly qualified undergraduate student body that came to UTC with an average ACT score of 23.4 and average high school GPA of 3.48. Once at UTC, however, first-generation students must blaze a new trail all on their own, without the benefit of parents or grandparents with knowledge of the college experience. National First-Generation College Student Day  is set aside to acknowledge the effort and challenges overcome by first-generation college students and the impact they and their education will make on society. Below, meet one of UTC’s own.

At McGavock High—a public school with a diverse student body of more than 2,000—almost half of Rodas’ classmates who planned to go to college were to be the first in their families, Rodas said.

As a high school junior, she decided she wanted to become a nurse and, in her last semester of high school, she chose UTC on the basis of a friend’s recommendation.

“I went on a mission trip to Ecuador at the end of my junior year of high school, and I saw this woman educator commuting more than four hours a day to teach in a school that went from kindergarten all the way to high school,” Rodas said. “That really struck my heart. I wondered what I could do, and I asked what else they needed.

“Healthcare, I was told. The lack of access and of providers means that a common cold can turn into a serious illness. I had been on an academic pathway at McGavock to becoming a lawyer, but after that, I knew nursing was where I had to be.”

Rodas’ mother, a single parent, wakes at 4 a.m. each day to begin the job she works until 4 p.m. Several evenings a week, she works another four to six hours at a second job. Rodas’ mother has worked at least two jobs for as long as she can remember, including to help support her older brother through his education at Lee University.

“Her dream was to become a nurse, but she was never given the opportunity to get the education,” Rodas said. “She gets to see her dream fulfilled through me and my brother, who is an athletic trainer. She says both of her children are going into the field she would have chosen.”

On track to graduate from UTC in December 2019, Rodas said she’ll head back to Nashville, where her dream job would be to practice nursing at Vanderbilt University Medical Center.

She also wants to connect with young people in middle and high school. “I want to inspire underprivileged students, to show them you can get a degree, you can afford to go to college, and you can have a better life after that,” she said.

“I want to inspire the next generations of my family to go to college, too—to set a standard that a high school education only is not enough; to communicate to them that my people are not here only to work at hourly labor, but to have meaningful employment and make an impact.”

Asked what she most anticipates or looks forward to about earning her degree, Rodas again mentioned her mother.

“My mom has worked so hard for my brother and me and at multiple jobs so that we can graduate without debt, and now we have a future where we can live a good life that’s enough—comfortable—and something I can sustain.

“But for me, one of the very best things about getting my college degree will be giving my mom the incredible pride I know she will have.”