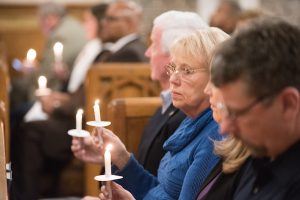 The Blue and Gold Memorial Service is a tradition on campus which honors and remembers those who have passed away this year.

The names of students, staff, faculty and alumni will be read in a ceremony which symbolizes that they were and always will be a MOC.

This year’s memorial service also remembers University of Chattanooga soldiers lost to World War I, a timely nod to last fall’s centennial anniversary of the armistice that ended the war. Read more about those soldiers and how they are honored today:

UC Students in the Great War

The 1919 Moccasin, the University of Chattanooga’s yearbook, was dedicated to the five students who lost their lives during WWI. Aaron Shaheen, George C. Connor professor of American literature, came across the dedication when researching the effects of the war on Chattanooga for a book. Digging a little deeper, he realized that, even though there was a memorial for the fallen students from World War II, nothing existed for those lost to World War I. With the anniversary of the war quickly approaching, he got to work with Matt Greenwell, UC Foundation professor of graphic design, to create a memorial.

The plaque created in the five students’ honor will be unveiled in UTC’s Patten Chapel at this year’s Blue and Gold Memorial. The location was deliberately chosen because the chapel was opened in 1918, and also for its ethereal atmosphere, Shaheen and Greenwell explain.

Although the chapel’s construction was completed after all the UC students had deployed, “I can’t help but think that the university would have had some sort of memorial service here for them in 1919,” Shaheen says.

“If you think of UC at the time, this was a small Methodist university,” Greenwell adds. “And I think the center of campus in a lot of ways. A spiritual center anyway, and so even now the chapel seems to hold a very special place.”

More than three-fifths of the UC’s male student population joined the WWI effort within six months of the United States entering the war in 1917. The university’s service roster had 180 names.

“History is what we decide it is,” Greenwell says. “Either these five students, these five soldiers are remembered, or they’re not.”

The five UC students who died serving in World War I are: 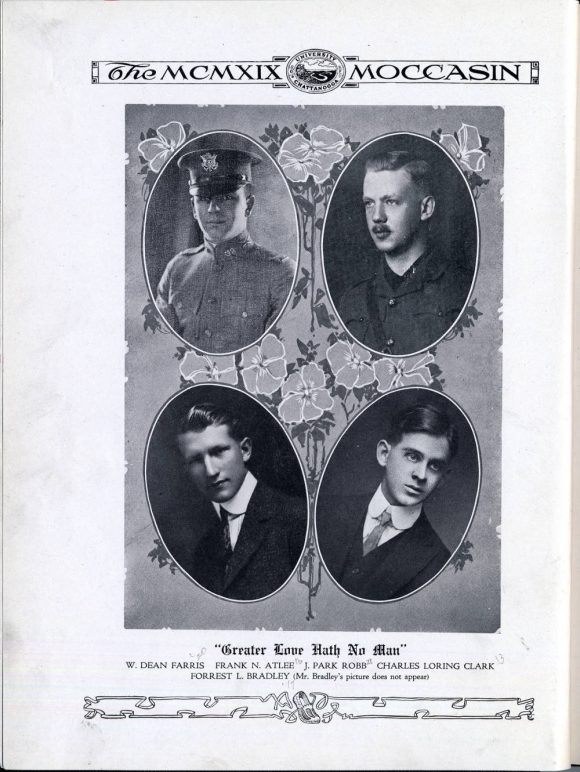 Click the image to explore the 1919 Moccasin through UTC Library Digital Collections.

Born Feb. 9, 1888, in Knox County, Tenn. to John Barton Bradley and Cynthia D. Ledgerwood. Bradley married Effie Mae Walker (1897-1986) in Campbell County, Tenn. He was a Methodist minister and served as chaplain to Company G, 83rd Regiment, 330th Infantry. He died Jan. 1, 1919, of meningitis at sea on the way home from Europe. He is buried at Arlington National Cemetery, Va.

Born March 11, 1897, in Chattanooga to William C. Faris and Hattie Althia Rush. His father was a retired Methodist minister. Faris died of influenza on Oct. 12, 1918, at Camp Zachary Taylor, Ky. He is buried at Forest Hills Cemetery in Chattanooga.

Born Jan. 13, 1894 in Dulwich, Southwark, London, England, to the Rev. Dr. William James and Ada Maria Loaring-Clark. He was a lieutenant in the Canadian Infantry, Central Ontario Regiment, 3rd Canadian Battalion. At the time of the war, he was studying at the University of the South in Sewanee, Tenn., to become an Episcopal priest. He also was a transient student at the University of Chattanooga. He was killed in action on June 17, 1915, in Calais, France. He is buried at Beuvry Communal Cemetery, Beuvry, France. Loaring-Clark is believed to be the first Hamilton County resident to pass away in World War I.

Biographical information collected by John Payne and with the help of Rev. Brad Whitaker.