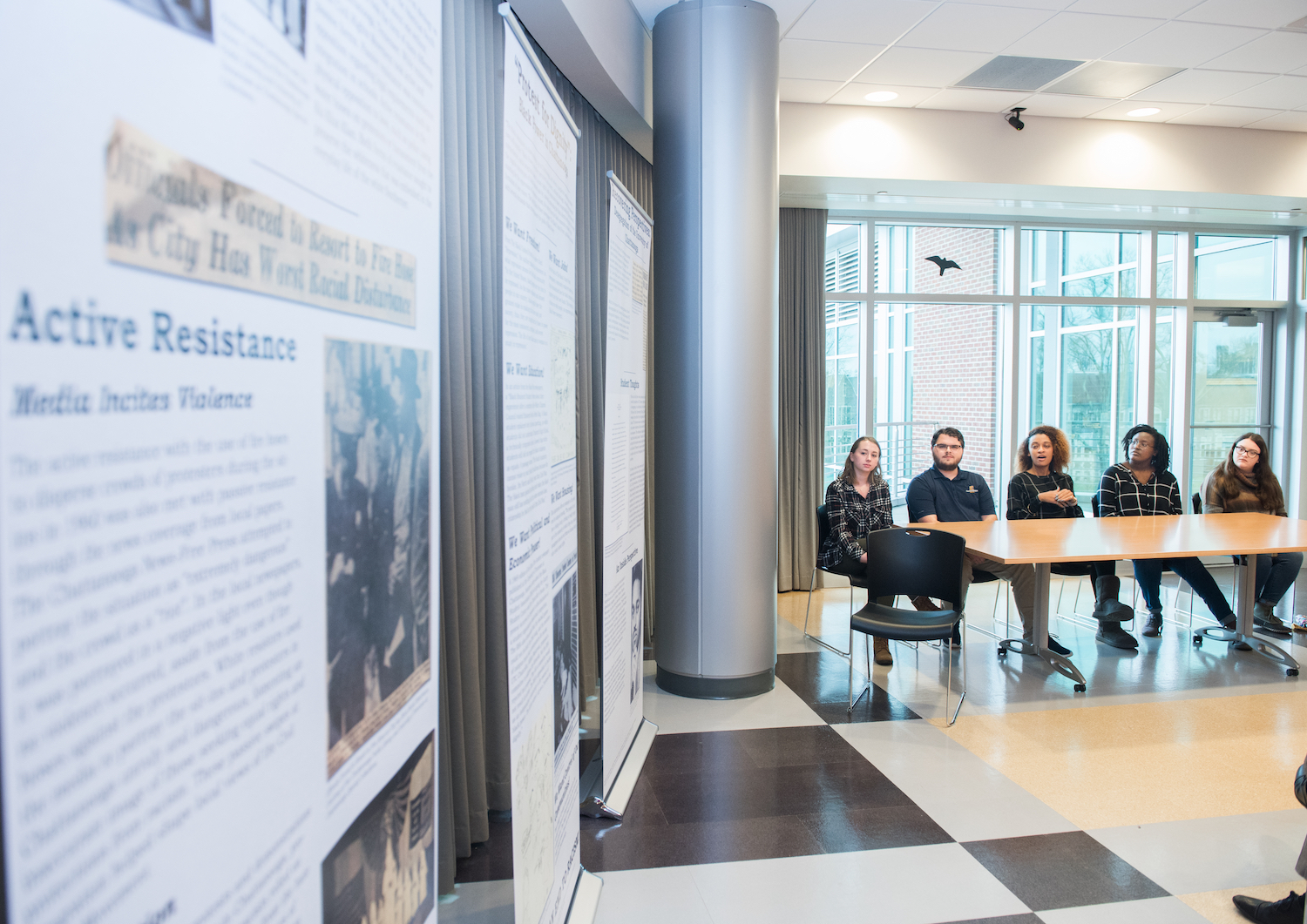 Students, from left, Brooke Sobo, Wesley Bolton, Cheyenne Pearson, Kiana Reece and Britany Green discuss their research at the opening of “We Demand an End to Racism!”: The Civil Rights Movement in Chattanooga, an exhibition curated  by students in the Modern Civil Rights Struggle course taught by Assistant Professor Susan Eckelmann Berghel.

Some of the students who curated “We Demand an End to Racism!”: The Civil Rights Movement in Chattanooga also wrote blogposts on their research. They are on the UTC Library website at: https://bit.ly/2E5pW7x

When she first saw the photo of the nine little children all decked out in the white robes and pointed hats of the Ku Klux Klan, Cheyenne Pearson says she “almost fell out of my chair.”

She came across the photo while doing research for “We Demand an End to Racism!’” The Civil Rights Movement in Chattanooga, an exhibition put together by students in the Modern Civil Rights Struggle.

Pearson acknowledges that the KKK children “may not know exactly what it meant at the time,” but the fact that adults were indoctrinating kids at such a young age was shocking. Discovery—both exciting and alarming—is a common theme when students in the class discuss their research for the exhibition.

Now on display on the fourth floor of the UTC Library, “We Demand an End to Racism!” is made up of five large panels divided into subjects related to the Civil Rights Era in the city. Among the panels are “Chattanooga Divided: The Fight for School Desegregation,” “White Opposition to a Changing Chattanooga” and “Protest for Dignity: Black Power in Chattanooga.”

Each panel contains photos, newspaper clippings, historical essays and newly written descriptions that focus on the specific topic. Among the displays are photos of police using firehoses to disperse protesters and students from Howard High School holding sit-ins at local lunch counters.

“It’s a very important part of Chattanooga history that doesn’t always get told,” said Susan Eckelmann Berghel, instructor for the Modern Civil Rights Struggle course and director of Africana Studies in the Department of History.

The 27 students in the class were divided into five teams and used the Special Collections in the library to do research. The amount of information was “immense,” said Brooke Sobo, who worked on the “Chattanooga Divided” panel. But once they dove in, they discovered more and more information about the city’s civil rights period that was brand-new to them. For instance, Sobo says, she was surprised to learn that complete integration in Chattanooga didn’t occur until the 1970s. “That’s a weird concept,” she said.

The type of research conducted by the students “takes a lot of hours that you can’t grade or assess,” said Berghel.

During her team’s research, Kiana Reece learned that the Black Power movement, which many remember as a violence-oriented crusade, was actually about educating blacks on how to achieve economic and political power. “The movement was to inform,” she said. When she and her team discovered that, their goal for the project was to give the movement “true justice.”

Through her team’s research, Pearson said she came to the realization that, while many folks think of Birmingham or Selma in Alabama or Little Rock in Arkansas or Memphis when thoughts turn to the civil rights movement, Chattanooga was part of it, too.

“We had a lot of the movement that went on here as well,” she said. 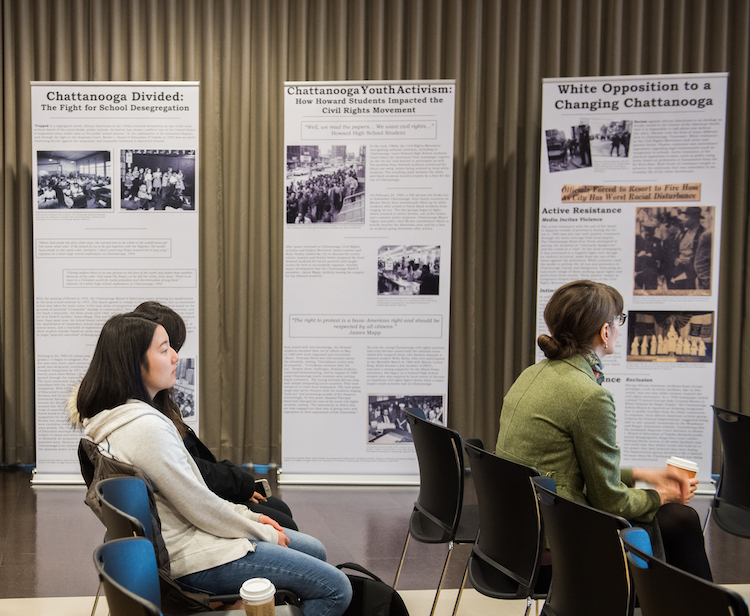 “We Demand an End to Racism!’” The Civil Rights Movement in Chattanooga is an exhibition of five large panels examining various elements of the Civil Rights Era in the city.