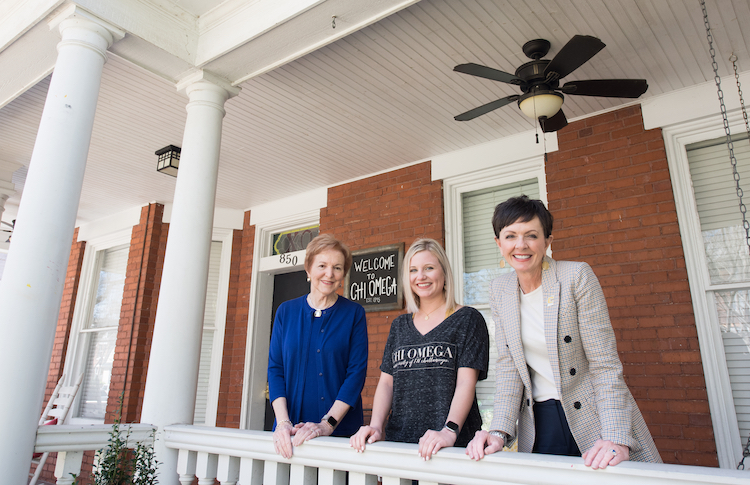 Fran Bender, co-chair of the centennial, Chi Omega President Haley Schlegel, and Kim White, former Chi Omega president, stand on the porch of the sorority’s current home on Oak Street. A new chapter house is in the works.

For more information on Chi Omega, go to: www.chiomegachattanooga.com

In 1914, six women students were just meeting as a sorority when they made history.

On the campus of what was then the University of Chattanooga, sororities hadn’t yet been established and, as the 1919 Moccasin yearbook put it, the six students “got the ‘sorority germ’.” The young women welcomed other female students until, by 1917, the group’s growth and the university’s support for it led to petitioning the national headquarters of Chi Omega to charter a new, Chattanooga chapter.

Multiple campus visits from Chi Omega officials later, the charter was granted and installation and initiation ceremonies happened on March 15, 1919.

Fifty years after that, and in the same year that the campus became the University of Tennessee at Chattanooga, UTC’s Delta Alpha Chapter of Chi Omega opened the doors to its own “chapter house”—not a residence but a gathering place for members. Today, in the chapter’s centennial year, a capital campaign is underway for a new Chi Omega house.

Kim White, president and CEO of Chattanooga’s River City Co., was president of the UTC chapter of Chi Omega in 1981 and is a chair of its “Building Our Future” campaign today.

“It changed my entire life,” White said of both her membership in and being chosen as a chapter president of Chi Omega. “I tended to be a little bit shy, but it was such a warm, welcoming group of friends that I just blossomed. When my name came in—you didn’t seek office, you were nominated—with nominations to be president, I was shocked.”

In addition to funding a $1,500 annual scholarship for a Chi Omega member based on exceptional community involvement and engagement, White said her desire to give back is the reason she’s chairing the capital campaign along with Chi Omega alumna Fran Bender Rushing.

Property at 515 O’Neal St.—adjacent to UTC intramural fields—already has been purchased. Local firm River Street Architecture has drawn up plans for the new, 5,000 square-foot, lodge-style house—designed not as a residence but a gathering place for studying, meals, events, initiation and chapter meetings. The projected cost is $1.5 million and fundraising is currently at $250,000. White said construction can begin when funding support reaches $750,000, and spring 2020 is the groundbreaking target.

The new house will replace the current one at 850 Oak St. in the historic Fort Wood neighborhood near campus. That house was an existing structure the chapter renovated and began using in 1969. Chapter membership averaged 70 to 80 women a year from then through the 1990s, but today averages 130 to 160 members with pledge classes of up to 75 women. The growth in the chapter means it has outgrown its house, which hasn’t been able to host initiation ceremonies or full chapter meetings for six years.

Haley Schlegel came to UTC with no intention and, she said, frankly, no interest in Greek life on campus. A senior with a double major in child and family studies and criminal law and whose hometown is Paulding, Ohio, Schlegel also is chapter president.

“If you told me as a freshman this is where I would end up, I would’ve laughed,” she said. “My first year at UTC, I went home every chance I could and cried the whole time about going back to Chattanooga. I wasn’t making many friends, and I wasn’t sure this was where I belonged.”

Her freshman roommate was a member of Chi Omega, though, and her example changed Schlegel’s perspective on sorority life and led her to pledge to Chi Omega as a sophomore.

“The sorority gets the credit, but it’s actually the 120-plus girls who’ve surrounded me like a large family that made the difference. Now, I can’t imagine being anywhere else or my great luck to be the 100th chapter president in the chapter’s 100th year with so many exciting things happening.

“And to have the opportunity get to know Kim White and Fran Bender—they are both so highly accomplished and, because they’ve been where I am now, their example tells me that being highly accomplished is possible for me and every girl in the chapter.”

Two days of celebration with hundreds of the 1,595 living Chi Omega alumnae returning to Chattanooga and UTC are planned for Friday and Saturday, March 22 and 23. The centerpiece of the Saturday festivities is a UTC campus shuttle tour—“Some may not have been back in years, and I think they’ll be amazed,” White said—along with visits to the current chapter house and site of the future one.

“I love looking back at history,” Schlegel said, “but I’m also really excited about what’s ahead.”