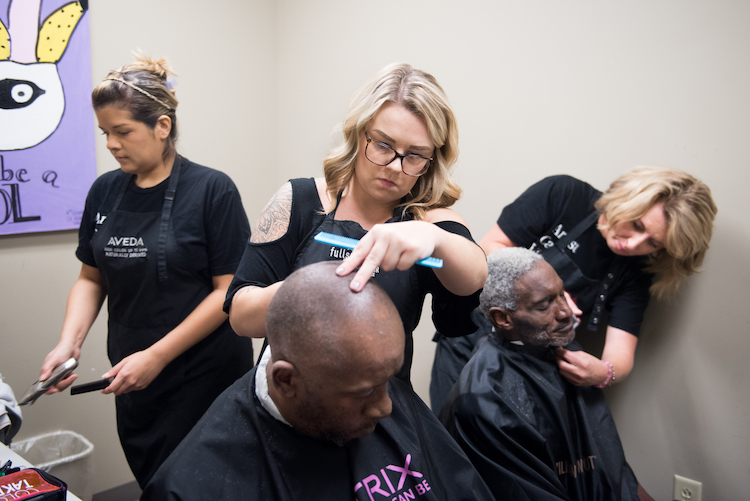 Hairstylists from Bridge Salon on the North Shore cut hair for homeless men at the Chattanooga Community Kitchen. 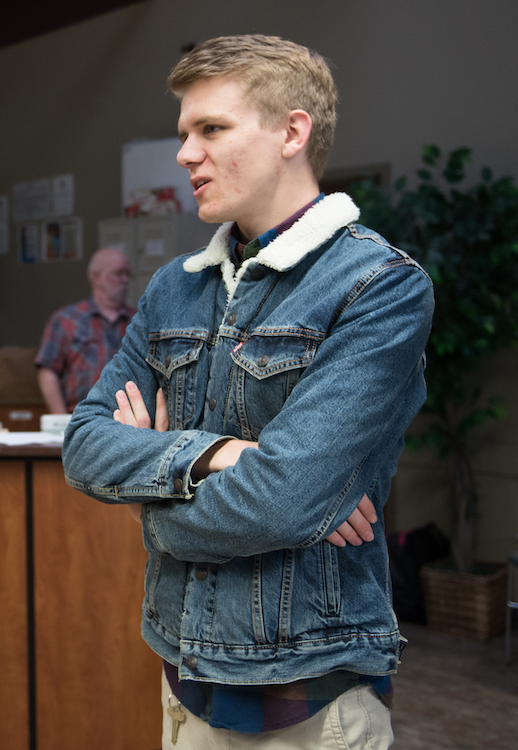 A freshman in biology, Felix Gould didn’t have much money growing up, so he knows how important something as small as a haircut can be to a person.

Corey sits in the chair, a barber’s apron draped across him. Behind him, hairstylist Chelsea, volunteering her time, stands with electric clippers in hand.

Corey’s hair is a thick mass that rises up some three inches from his head, but he doesn’t want her to touch that. The homeless man just wants his beard trimmed nice and neat. “I can’t keep the females off me,” he says with a smile.

His friend Tony Talley walks up while Corey is in the chair. “Give him a Mohawk or something,” Talley says. “Make him look pretty.”

Whether Corey—who doesn’t want his last named used—is pretty and irresistible is a personal call, but for him, it’s all good because the trim was free. “I got to save my money that I was going to spend to get it, so it helped me out a lot,” he says.

Money is a big issue for Corey, like it is for most of the people hanging out in the Chattanooga Community Kitchen. But Felix Gould, a freshman in biology at UTC, knows about money issues and has created a program to help the homeless.

On the first Friday of each month, hairstylists go to the Community Kitchen on 11th Street in Chattanooga to cut hair for free. A couple of weeks ago, three hairstylists from Bridge Salon on the city’s North Shore were cutting hair and trimming beards and mustaches. Gould’s efforts launched the program. “I came from a poor family in Connecticut, and regular haircuts were never really in my life,” Gould says. “I realize how much of a toll not having a simple thing such as a haircut can have on a person.”

At the Kitchen, some of the men talk and joke and laugh while their haircut is taking place; others sit stonily quiet, eyes down. Before coming to Chattanooga, Bridge Salon owner Teresa Wesson cut hair at the homeless shelter in Knoxville and understands the power of the simple act. “I saw what an impact it had on desperation,” she says. “It changes their whole demeanor, at least temporarily. I’ve noticed it gives them incentive to try and go interview for a job because they’re more presentable; they don’t look beat down, disheveled and ashamed.”

A job interview is why Paul got his hair cut, which had gone about four months without a trim. “It  was pretty scraggly,” he admits. “Getting it cut definitely makes you feel a lot better about yourself.”

Gould came up with the idea while talking to Wesson while getting a haircut at Bridge Salon. “Walking out of there that day, I didn’t think much of what I said, but then I got home and looked in the mirror at my haircut, and I loved what she was able to do,” Gould says. “So I called Teresa and asked if she would join me in this pursuit and she said ‘Yes.’ ”

Wesson says she participates for a couple of reasons. One is a kind of payback for her “rewarding” career. The other is the reaction of the homeless men. “The smiles that it brings and the way I see a lot of these people light up when they look in a mirror,” Wesson says. “It’s just very humbling. That’s probably the biggest thing it does for me. It humbles me, makes me very appreciative and grateful.”

In October, Wesson was the only hairstylist available one Friday, and she was able to give about seven haircuts, Gould says, but he knew immediately that his efforts to organize the program were worthwhile. “I knew it would be needed, but afterwards every single person who got their hair cut came up to me and thanked me and shook my hand.” Even with three hairstylists participating in November, only men have come to get haircuts, but the ultimate goal is to add women and children, he says.

The first couple of times were “a little bit sad because a lot of people just got buzz cuts, and I think they did that thinking the program was not going to keep going,” Gould says. “I hope that, as the months proceed, they realize that this is going to continue and you can do what you want, not what you have to do.”