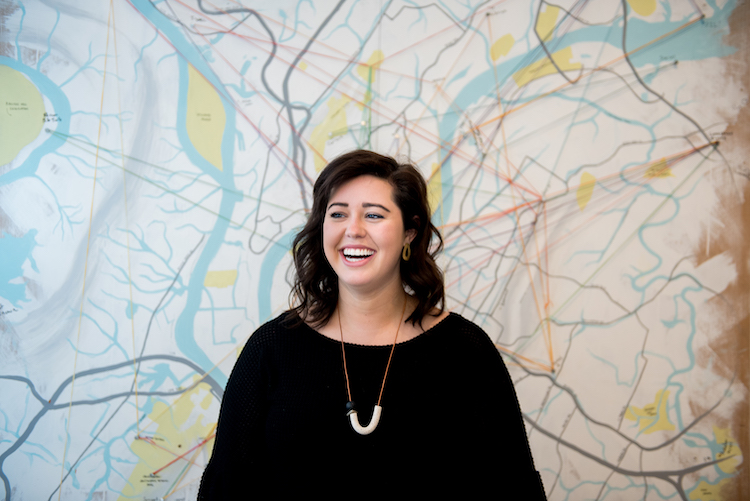 When Aggie Toppins, head of the art department, first came to UTC as a professor, she taught a class for design students called Co-Creations. One of the class projects was about bicycles. Students in the class set their sights on the public-use green-and-blue bikes stationed throughout Chattanooga.

No one asked the students why bicycles. Rather, the students asked: “Why aren’t people using these?” They began exploring reasons.

First, the students tried out the bikes. They spent an entire class period zipping around local streets with two-wheelers from the city’s bike-sharing system. They talked with people on the street about the bikes. Quickly, class members discovered what kept Chattanoogans and visitors from renting bikes: They were kind of heavy, it was said … and Chattanooga has a lot of hills … and it can get miserably hot in the middle of summer. “By getting out and asking questions, the class experienced the practical, behavioral matters one might not grasp if you’re just looking at a project brief on a piece of paper,” Toppins says. She made her class understand: “Go out and experience the problem.”

After researching hang-ups to the local bike-sharing system, students designed and created prototypes of materials to address the obstacles, hoping to entice more involvement with city bikes. When the class presented its designs at a local show, City of Chattanooga employees in the audience were impressed.

The following semester, the city’s Department of Transportation became the first official client for the third-year design class, now titled Professional Practices. The class spent a spring semester working with Department of Transportation Administrator Blythe Bailey and collaborating with Jenny Park, multi-modal planner for the Regional Planning Agency. Their goal? Create a well-designed communications strategy for spreading the message of multi-modal (walking, biking, bus) transportation available in Chattanooga. At the end of the semester, students presented a full-brand book titled “ThisWay,” an edition complete with ideas for bus-side ads, mobile applications and symbols that could be used for signage.

“I wanted the designers (students) to recognize the depth of the challenge and not just make a logo,” Bailey explains. “They really dug deep and even began to understand the differences in challenges from moving around on foot, bike or bus, depending on the neighborhood and the geography. The work was designed closely in the context of place, and pieces were directed toward particular neighborhoods to better reach specific audiences. The work was sophisticated, thoughtful, and the students showed a genuine interest in the topic,” Bailey adds.

Toppins’ first semester teaching the Professional Practices course was a success. The Department of Transportation hired a student intern from the course who spent a year implementing several of the designs created by the class. Now taught every spring semester since 2014, the Professional Practices course has continually put students to work with community partner-clients.

Previous semester projects have included a series of posters for a history campaign with the Chattanooga nonprofit Organized for Action, an energy-efficiency campaign with EPB and a project with the local company green|spaces.

For their most recent project, students from spring 2018 Professional Practices designed all branding materials for the second-largest art and design conference in the U.S., SECAC (formerly the Southeastern College Art Conference). Senior Ashley Prak was a student in the class in 2018 was part of the group that designed all the SECAC materials. Prak says she learned about collaboration and building connections as she worked with classmates to create designs for interior and exterior displays, digital graphics, name tags, merchandise and a program booklet, among other graphic materials.

“Before I took the class, I was aware that it was meant to teach us how design works in a professional setting. But after taking the class, I realized it was more than just that,” Prak says.

“Through actual practice, I learned how to apply my own strengths to certain responsibilities in collaborative work and how to maintain balance when working with others. I was able to learn from my colleagues and engage with them in areas I felt I lacked satisfactory knowledge. The most rewarding part of the class was how well our work came together at the end, seeing the result of our collective efforts.”

Under the tutelage of Mark Cooley (Toppins had Cooley direct the 2019 class), design students are creating materials for the local nonprofit Causeway. They’re partnering with Chelsea Conrad ’13, creative director at Causeway. Conrad took the art design class when she was a student at UTC. Although there are still many similarities, there is one big difference between the class Conrad took and the class she is partnering with now—a real-world client.

“I was in the last Professional Practices class that was taught before Aggie Toppins took over,” says Conrad. “I speak to her class most years now, and I am always envious that they are getting to research and work with real-world clients. However, the class was still beneficial for me. We were divided into groups, and each student created a brand for a fictional dog-grooming business with a specific audience assigned, and our professors posed as the client,” Conrad explains.

The class gave her a chance to hone and test her design skills, but it also taught her a lot about communicating and balancing the needs and wants of a client and an intended audience, a useful skill even in her current job. “It was the first time that I had to consider an audience that was not myself. It didn’t matter if I liked the work. What mattered was communicating successfully to the target audience.”

She adds, “It’s your job as a designer to navigate the client relationship and figure out what to stand up for and which things to bend on so the client is satisfied with the final product.”