Engineering students conceptualize and build Music Wall for the disabled 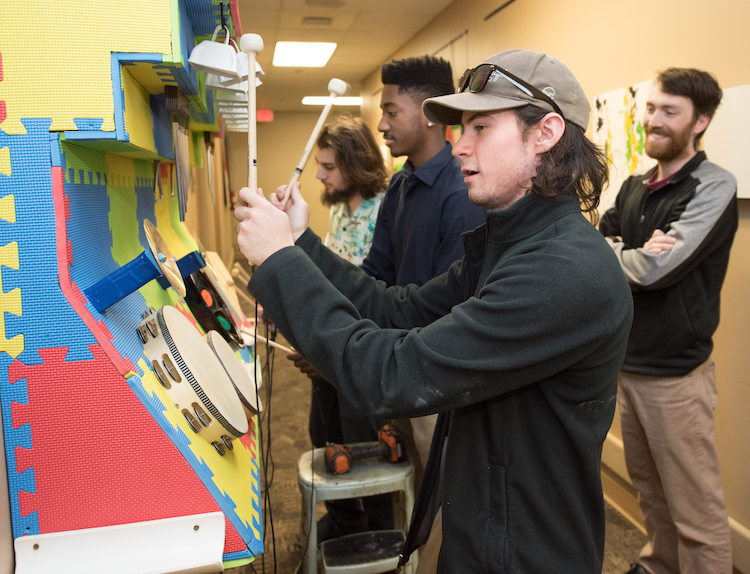 Larry Westfall is getting down with his bad self. A musical mallet in each hand, he pounds ferociously on two tambourines, switches to crash on two cymbals, then switches back to the tambourines. As he does, he starts singing “I Saw the Light.”

“That’s his favorite song,” says McKenzie Brandt, day services manager at the Ooltewah location of Open Arms Care, which works with those who have intellectual disabilities.

Larry, who has Down syndrome, is one of the group’s clients and he, like many other clients at the facility, has fallen in love with the Music Wall, a multi-instrumental device conceived, designed and built by four UTC engineering students.

Brandt says that, in the few weeks since the students installed the wall, she hasn’t gone a single day without hearing a client playing its instruments. “They’re having a blast,” she says.

“We want this thing to be used and abused. It will be beaten up, hopefully, for lots of years,” says Kevin Finch, a sophomore in mechanical engineering and member of the Music Wall team.

The Music Wall was built by the students—Finch, Matthew Branning, Gary Paradis and John Crabtree—as part of the Introduction to Engineering Design class helmed by Cecelia Wigal, UC Foundation professor in mechanical engineering. Students had to choose a project that involved a problem faced by someone with disabilities and design a device to reduce or even alleviate that problem. “We had to stimulate the senses, entertain the users and accommodate the users and to make sound,” says Finch.

Wigal has taught the Engineering Design course for more than a decade. It starts off with project proposals from organizations such as Open Arms, Signal Centers and Special Olympics, those who deal with disabled adults. Students then choose from a list of projects that Wigal has compiled. Students must work with the “customer” to understand their needs and come up with a solution. In the case of the Music Wall, whatever the team came up with also had to meet Americans with Disabilities Act requirements.

The team built the wall from plywood, then covered it in the multi-colored, interlocking foam squares often seen on playroom floors in daycares and other areas used by young children. “We used foam because it’s soft and it has a little bit of texture to it. They can play with it and not hurt themselves,” says Branning, a junior in environmental engineering. “I’ve bumped my head on this a couple of times and, look, I’m fine.”

The Music Wall is five feet long and three feet tall and hangs in a hallway in the Open Arms facility. There are 12 cowbells, two triangles, two sets of wind chimes, a wooden xylophone, two tambourines, two cymbals and a steel drum. “We thought about instruments that would be useful on the shape and structure,” says Paradis, a sophomore in mechanical engineering. “We agreed on percussion instruments for a couple of reasons. They’re pretty low-maintenance. You don’t have to tune them. They’re pretty durable; they should last a lifetime.”

To keep the musical mallets from getting lost, they are attached with cords to PVC pipes cut in half to act as trays.  The cords are long enough that every mallet can hit every instrument on the wall, giving players the freedom to indulge their inner musicians.

During one of Wigal’s occasional visits to update the status of the project, it was evident that team members had spent time carefully reflecting and considering how to meet the needs of Open Arms clients when coming up with the Music Wall’s design, she says. “The thinking processes they went through, and how they came up with what they did, I thought was very innovative. That’s the fun of it, to be surprised to see what they do.”

Each of the Music Wall’s students play instruments, so they took the Music Wall on several test runs while it was being made and when it was finished. “We jammed a lot on this,” Branning says. “It’s as loud as we can make it,” Finch says.

On the day the Music Wall was installed, Open Arms employees came out of their offices to look at it. The reaction was euphoric.

“I hope you guys get a good grade on that.”

Robin Liner, director of day services at Open Arms, had a more emotional reaction. “I just want to cry. I know they’re just going to love it,” she said, wiping her eyes.

While Larry was finding his musical muse on the tambourine, Liner’s daughter, Lori, who also has Down syndrome, was standing next to him, playing the xylophone and wind chimes. And yes, she too was getting down with her bad self. 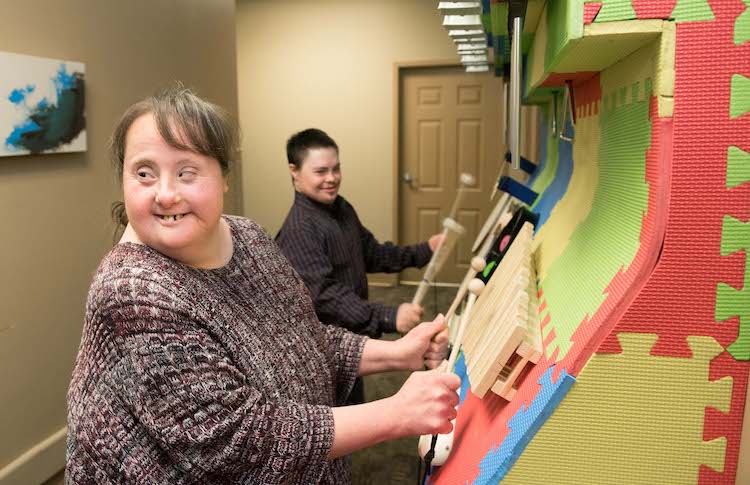 Lori Liner and Larry Westfall test out the Music Wall once it has been installed at Open Arms Care in Ooltewah. 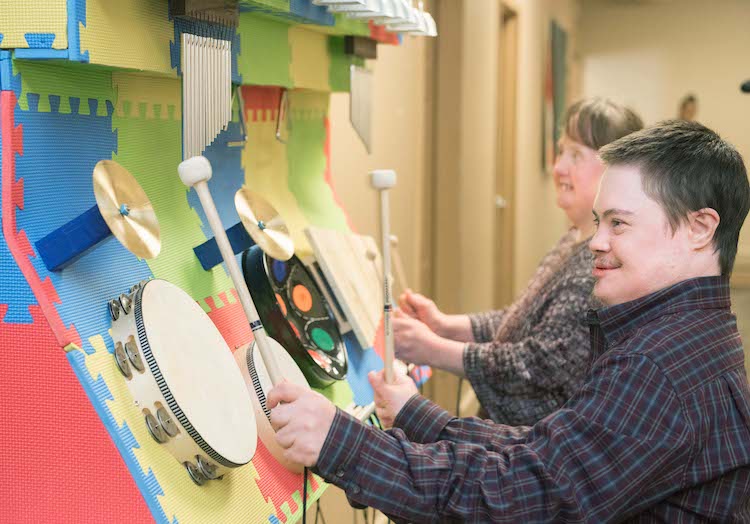 Larry Westfall and Lori Liner enjoy their first time playing the instruments on the Music Wall. 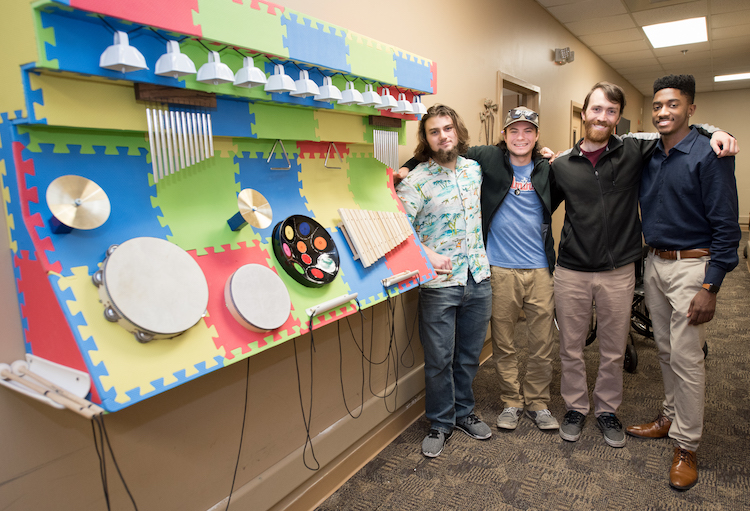 Engineering students, from left, Gary Paradis, Matt Branning, John Crabtree and Kevin Finch built the Music Wall after talking with staff at Open Arms Care in Ooltewah to find out exactly what they needed for their clients. 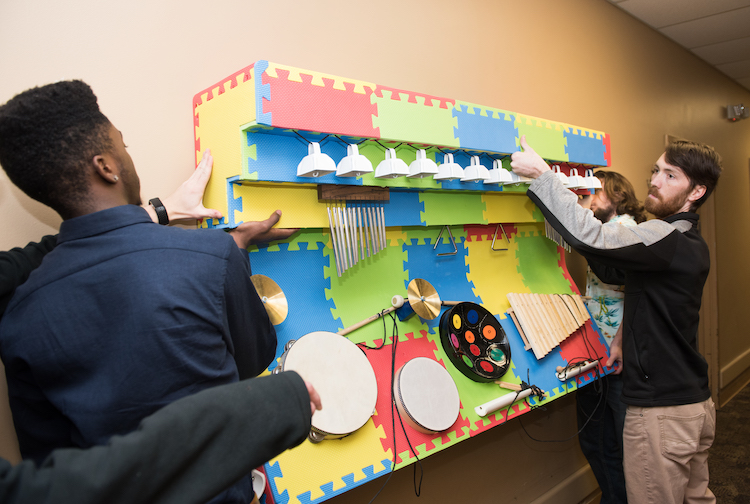 Kevin Finch and John Crabtree hoist the Music Wall during its installation. 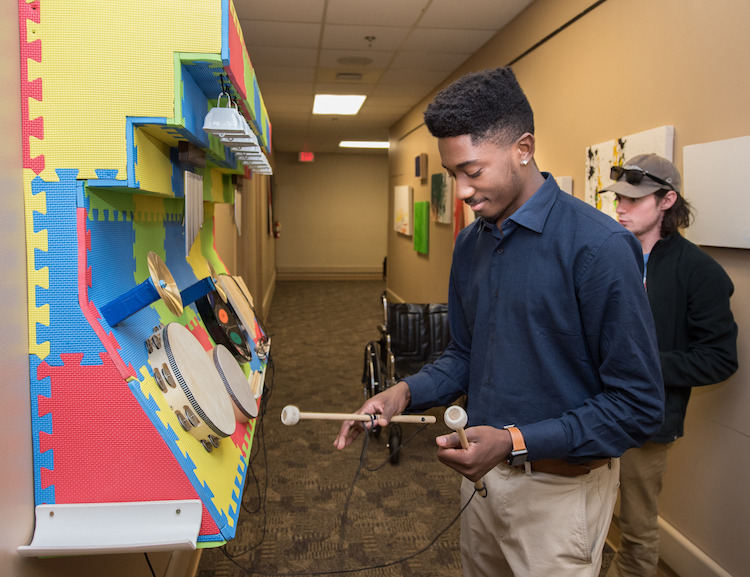 Kevin Finch checks out the mallets used to play the Music Wall. 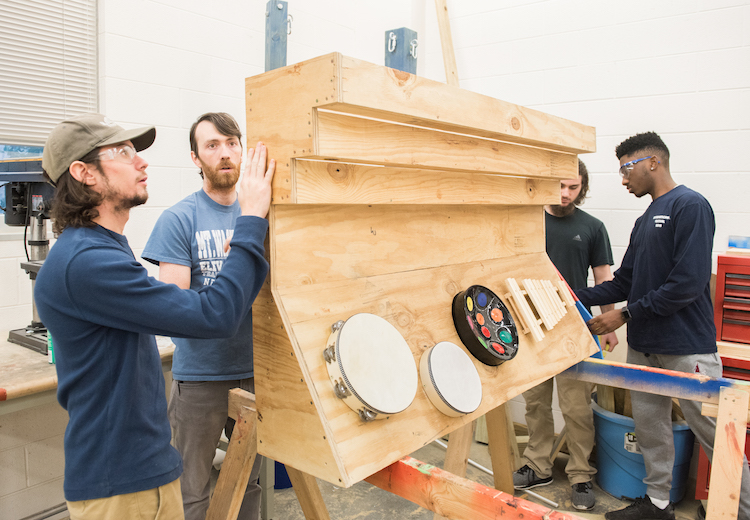 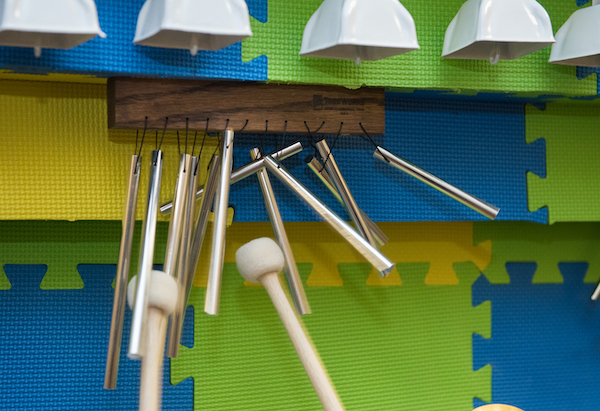 Along with a tambourine, steel drum, cowbells, and xylophone, a set of chimes is part of the Music Wall. 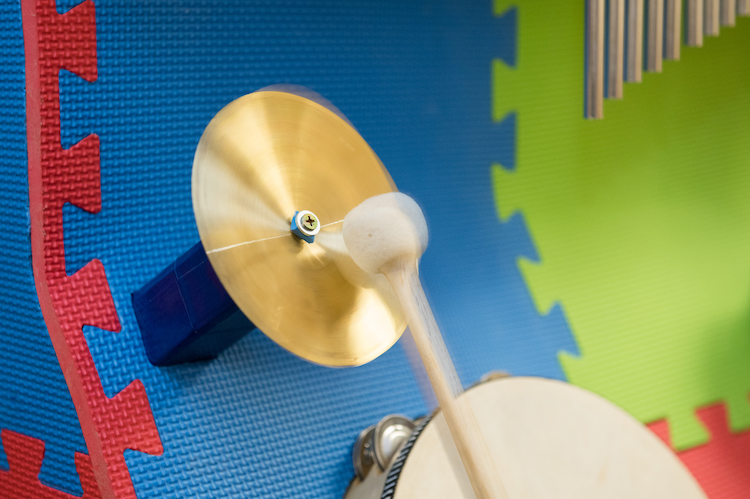 A cymbal is one of the instruments on the Music Wall.
Media Relations Contacts: Email Shawn Ryan or call 423-425-4363.