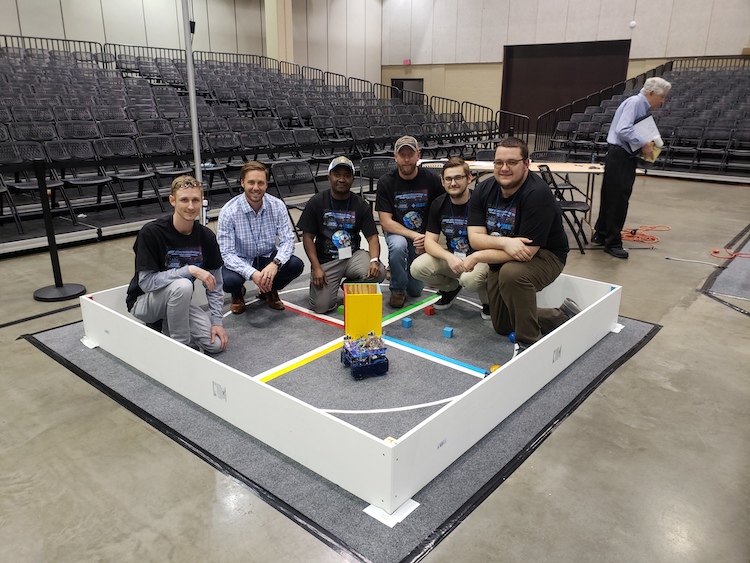 A robot built and run by a team from the College of Engineering and Computer Science placed third out of 44 teams in a regional robotics contest.

The electrical engineering students— Anthony Maxwell, Artem Malashiy, Shane Taylor,  Robert Rhodes—built the prototype for the robot in December, finetuning its design about four times before finishing the final model that was used in the competition. They named it Scrappy Bot.

“Our robot was the talk of the tournament and by far the favorite of the fans from the 44 college teams that participated,” said Abdul R. Ofoli, UC Foundation associate professor of electrical engineering. “I am very proud of this team and what they have accomplished.”

In the competition, teams were instructed to build “an autonomous debris removal bot” to clear space junk from Earth’s atmosphere, making sure spacecraft would not hit it and cause a possibly catastrophic and fatal event.

Robots were placed in a “box” that measured 108 inches on all sides with an “orbit circle” drawn inside that was divided into four quadrants, each containing balls and blocks. Corners of the box had square drawn in them, the starting spot for the robots. The goal was to push as many of the balls and blocks into the corner squares or outside the orbit circle within three minutes.

“We were the team to beat, but during the semifinals when making a turn, our robot made contact with the opponents’ bot and could not turn fully which made it got stuck,” Ofoli says. “It cost us the chance to compete for the top spot, but we won the third-place runoff.”