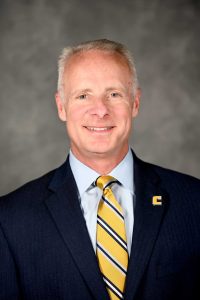 Martin W. (Marty) Smith, a fundraising executive with more than 30 years’ experience in higher education leadership, has joined the University of Tennessee at Chattanooga as its first senior associate vice chancellor for development and alumni affairs.

Smith was director of athletics for Saint Joseph’s College in Rensselaer, Indiana from 1998 to 1999 and held the same position at Ottawa University in Kansas from 1995 to 1998. He was Ottawa’s director of public relations from 1990 to 1995 and its associate director of development from 1988 to 1990.

Smith has a master’s degree in sports administration from the University of Kansas in Lawrence, Kansas and a bachelor’s degree in public relations from Ottawa University in Kansas.

He is a member and past presenter at conferences of the Council for the Advancement and Support of Education.