Football? Engineering? Wil Young chose both … and made history 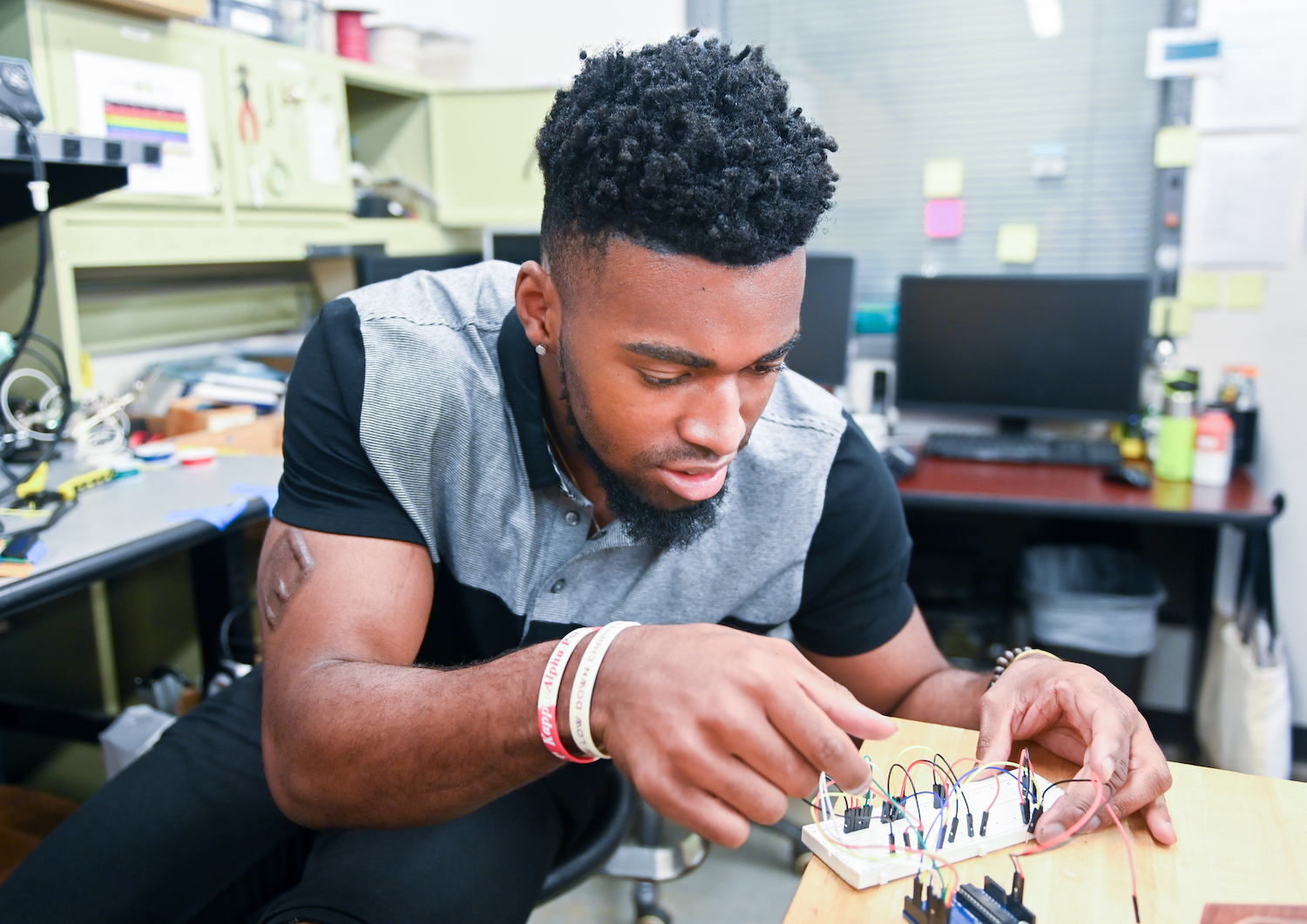 Wil Young, the first UTC football player ever to graduate with degree in electrical engineering. 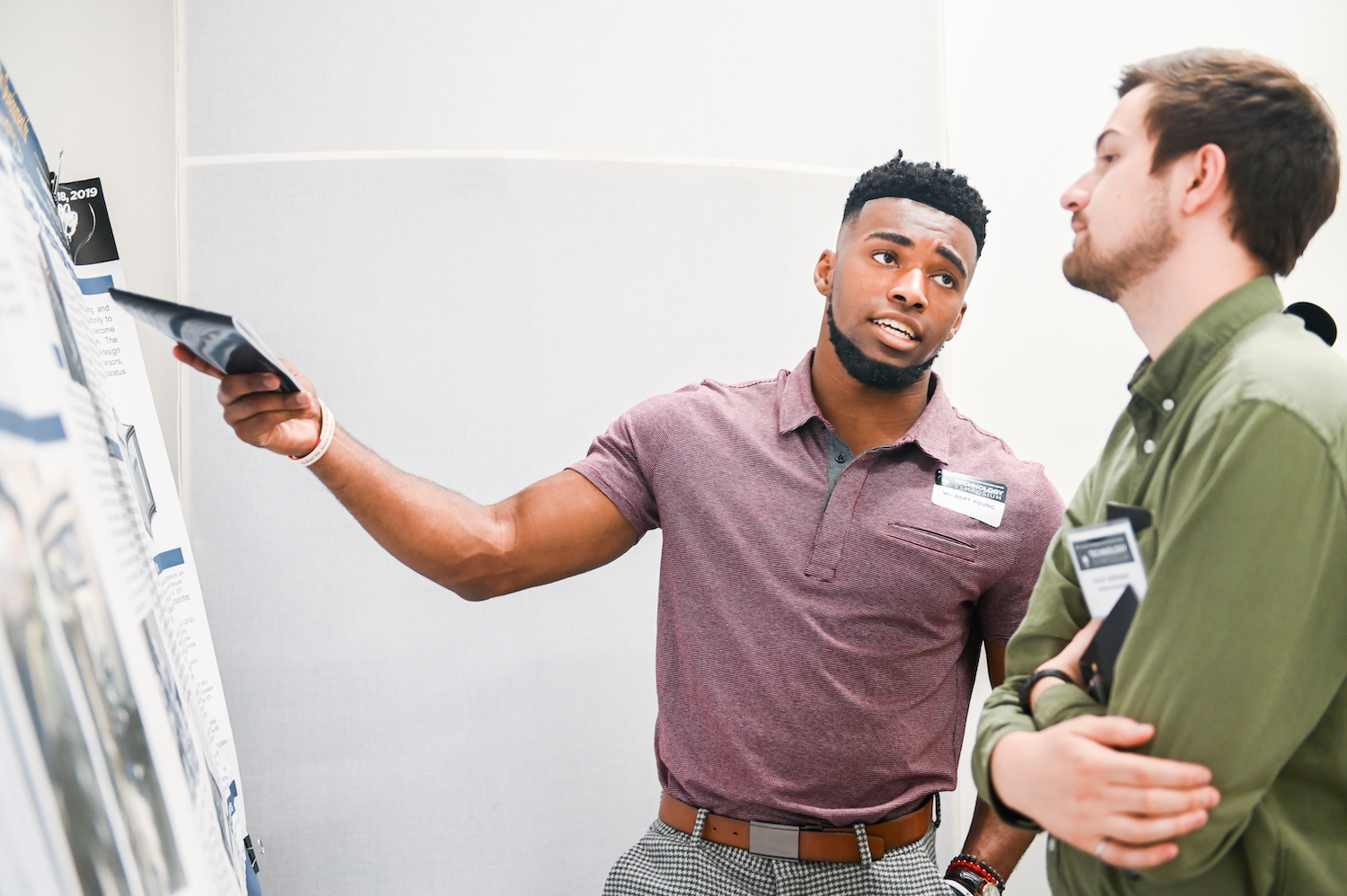 Wil Young discusses the project he recently presented at the College of Engineering and Computer Science’s Tech Symposium.

Wil Young didn’t go to college to make history. He just wanted to play football and earn a degree.

Young did both at the University of Tennessee at Chattanooga and, along with receiving a diploma on Saturday, he will earn a place in UTC history as the first Mocs football player to ever graduate with a bachelor’s in electrical engineering.

“I definitely never expected it because I didn’t know when I came here that it hadn’t happened before. It’s pretty cool to know that I’ll be the first. It’ll be something good to add to my resume,” Young says with a laugh.

That resume also will include four years of membership, including one year as an officer, in Kappa Alpha Psi fraternity and, of course, four years of playing Division I college football.

As a Mobile, Alabama, high school receiver, Young was rated a three-star recruit. He chose a football scholarship from UTC over possible military appointments to the Naval Academy or West Point. His campus visit—and the city and scenery of Chattanooga—won him over.

“I actually didn’t know too much about UTC coming out of high school,” Young says. “I came on an official visit here, and I just fell in love with the town, really. It was a change of scenery. It’s different from back home. Back home, you know, you got no mountains or anything like that. I liked it here and decided to come up.”

While he sat out the 2014 football season as a redshirt freshman, Young kicked off his academic performance by making both the UTC Dean’s List and the Athletics Director’s Honor Roll, along with the Southern Conference’s SoCon Honor Roll.

In 2015, Young’s second year on campus and his first football season on the roster, he played in all 13 games and started in two of the last three contests. On the field, he made 15 catches for 154 yards, including six catches for 82 yards at Virginia Military Institute. Off the field, he made the Dean’s List and Athletics Director’s Honor Roll again.

He missed five games of the 2016 football season to injury but was back in 2017, playing in 10 games, making 16 catches for 128 yards and—again—the Dean’s List and Athletics Director’s Honor Roll in spring semester 2018.

Fall 2018, Young’s last as a Mocs receiver, saw him achieve all four of his collegiate career touchdowns, part of his 46 catches for 535 yards.

When he wasn’t working out, at practice or playing football, he was studying.

“I knew it was going to be tough, but I didn’t know how tough it was going to be when I first got into the major,” he says. “Fortunately, I’ve always kind of had a knack for math, but I wasn’t so crazy about the sciences—biology, the chemistries and everything—so I thought engineering would be a good route to go to use my skill set and develop myself from there.

“Still, I ran into Calculus II and Differential Equations; those were some really tough math classes that I had to put in a lot of time and effort that I’m not used to putting in toward school, and to make sure I did well in those classes.”

As of last month, Young was still on the employment market. With the extensive time demands of competitive athletics on top of going to classes, labs, doing homework and studying, his life as an undergraduate hasn’t included workplace internships. Still, he says, he has developed skills as a student-athlete that should serve him well in pursuing a career in microelectronics.

“Discipline. Disciplining yourself, making sure you learn to manage your time wisely. You have to discipline yourself, but I also feel like it’s about getting into a routine,” he says.

“Sometimes, school and everything else has stopped me from performing the way that I needed to perform on the football field. And then there’s also been times where I haven’t performed to the best of my abilities in school—finding balance and being able to excel in both. It’s been tough. It’s been tough.”

Among the favorite memories that Young is taking with him from UTC, football games dominate, especially in the fall of 2014.

“And some of our big games that we played—like when we played Florida State (in 2015)—and got to compete against guys that you see every day in the National Football League. This past year, one of my favorite games was the VMI game—Homecoming—I had a pretty cool catch in that game, so I’ll always remember that one.

“I’d do anything to have those (days) back. That’s what I would tell any of the young guys coming in because, once you get away from it for just a second, you’re going to miss it.”

For now, though, he’s focused on what comes after graduation.

“I have some mixed emotions, but the strongest right now is just me being anxious, ready to see what’s next. I’m ready to take my next step, to see—moving forward—what my future holds.”

4 Comments » for Football? Engineering? Wil Young chose both … and made history