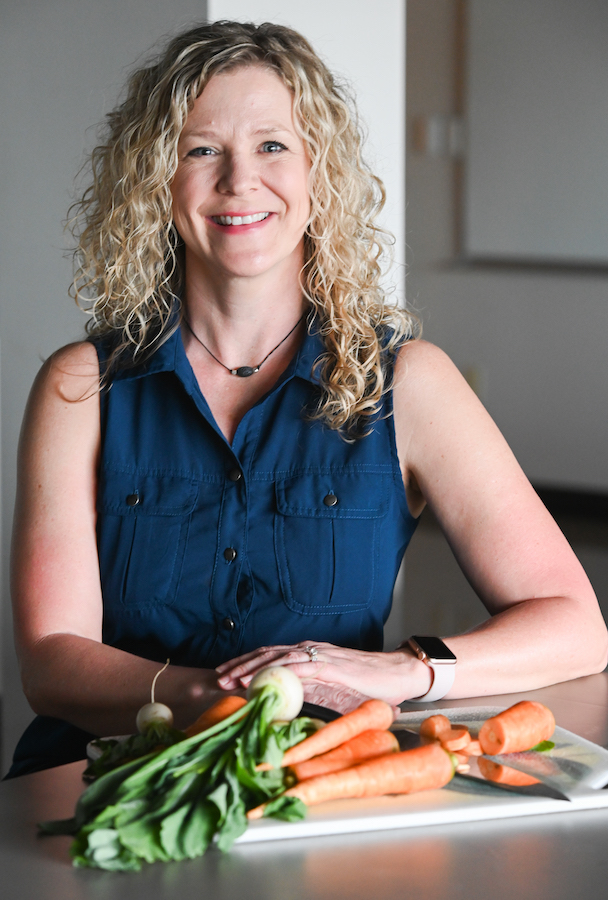 On the wall of Stephanie West’s office in the University of Tennessee at Chattanooga Department of Athletics hangs a poster with those words.

“It was how I got through the next class when I thought I couldn’t do it anymore,” she says.

A wife, mom, grandmother and full-time employee in Athletics, the 46-year-old West has juggled multiple responsibilities while working toward her degree in dietetics. On Saturday, she’ll walk across the stage at McKenzie Arena and says it’s finally dawned on her that everything she has worked for over seven years is about to come to fruition.

“I catch myself smiling when I’m thinking about all of that chemistry behind me.”

West has been interested in nutrition since she was in high school. Her boss from a job she had in high school gave her a cookbook years ago that held important scientific facts about nutrition. Since then, she has used that information when she cooks, especially when making meals for her four kids and husband, Danny West.

“I appreciate how important food is to fuel your body,” says West, who works as an administrative assistant in Athletics. “I do believe that food is medicine.”

While working in UTC’s nursing program as a grant coordinator, West saw first-hand the important role dieticians play in the healthcare field. She knew she would go back to school someday to study dietetics; she just didn’t know when.

The “when” came after all her kids were either in college or closer to an age when they could take care of themselves.

And now that she’s about to officially earn her degree, her kids and husband tell her all the time how proud they are of her. She hopes she is an example to them—and everyone around her—to keep moving forward even when it isn’t easy.

“I’m hoping because they know how hard this has been for me, that when they face hard things, they can remember how I pushed through and finished,” she says.

But she is equally proud of her family and says she wouldn’t have been able to do it without them supporting her when the load seemed too heavy.

“I wanted to quit a lot,” she says, “but they would encourage me and tell me I couldn’t.”

The hardest part about being in school hasn’t been the studying, the long nights or busy schedule. It’s having to tell her grandkids she can’t do something with them because she has school.

Even though some of her classmates  assumed she was the professor instead of the student the first time they met, she quickly fit in.

“They just treated me like every other student,” she says. “I never felt any different.”

But being closer in age to her classmates’ parents, she feels a sense of pride for their accomplishments and is one of their biggest cheerleaders.

“I was just impressed at how hard they worked.”

West says she stayed focused on her tasks by thinking only about her next test or next paper while avoiding thinking about all the upcoming projects beyond those.

“Just get through this next test and assignment,” she says, “and not try to be overwhelmed by the magnitude of the process.”

The dietetics degree required her to complete five chemistry courses which required a lot of math, a subject she’s never liked. She waded through, but admits there were times when the periodic table wasn’t her friend.

“After working all day, you don’t always have the brain power to come home and learn about chemical equations,” she says.

Still, she encourages anyone contemplating whether to go back to school to go ahead and take that leap.

“I want to encourage people to not form barriers in their mind,” West says. “We have a lot of resources today that make the process a lot easier.

“It’s achievable and worth it.”

4 Comments » for Mother, grandmother and wife balances life and work to earn degree