Finding, fixing and playing: All for the love of pinball 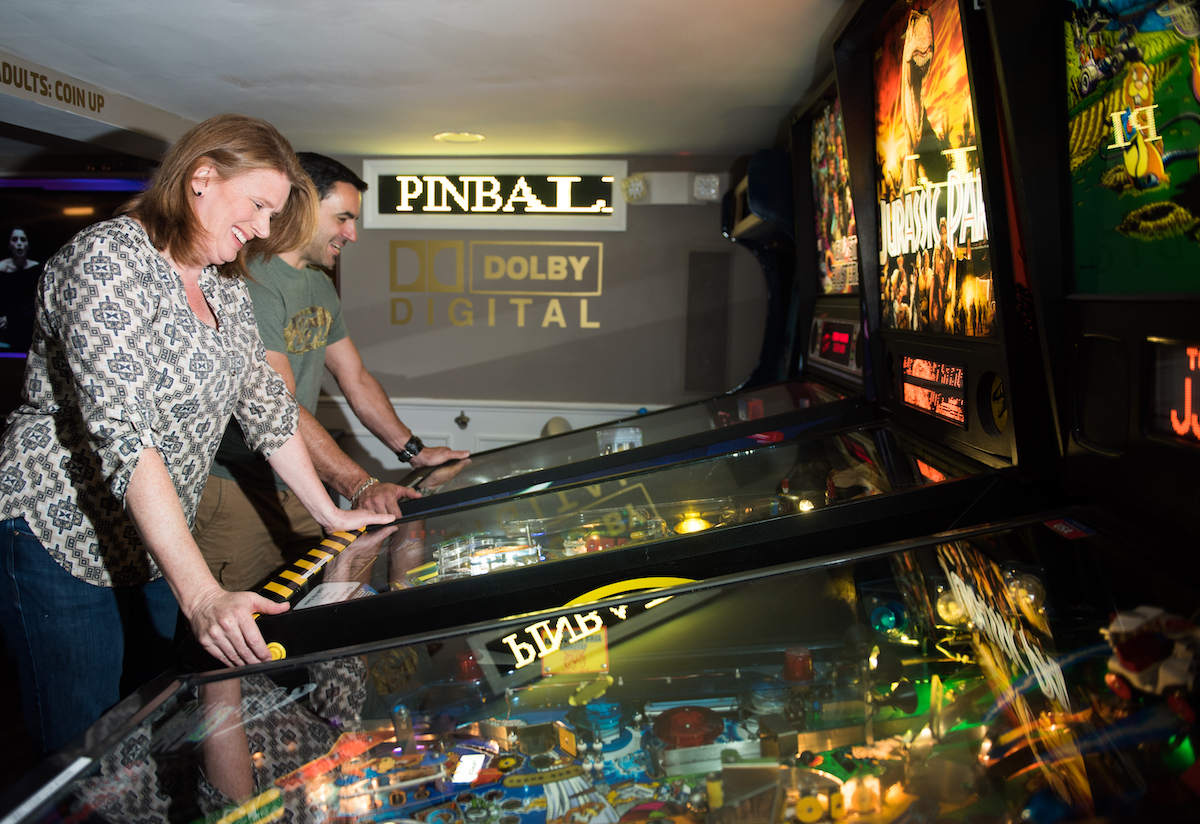 Harriet and Allan Chambers play pinball in the special game room he built in their basement.

Robert and Kim Dooley had dinner reservations to celebrate their 30th wedding anniversary.

Then the pinball machine arrived.

“It was delivered like at five o’clock and now I’ve got this pinball machine,” recalls Dooley, dean of the Gary W. Rollins College of Business. “It was like, ‘Can we go grab McDonald’s?’”

The Dooleys are still married, so obviously they didn’t get an anniversary meal of Big Macs and fries. And Dooley still has the pinball machine, a 1976 Aztec by Bally, the first one he’s ever owned.

But not the last.

Since the Aztec was delivered three years ago, Dooley has purchased 18 more pinball machines. “I’ve gone off the deep end with no end in sight,” he admits. “I play every one of them every night. One game.”

The machines are all in his basement, standing side-by-side in a small room, just like they might be in a bar somewhere. Multi-colored lights flash around the room along with mechanical voices saying things like “Activate Embryon!” and the electronic sound of a volcano erupting.

“They keep him out of trouble. It could be worse,” says Kim.

Dooley is not the only UTC staffer who has pinball machines in the house.

Harriet Chambers, assistant vice chancellor of finance and administration for the Office of Development and Alumni Affairs, has four pinball machines in her basement, but they weren’t her idea. Her husband, Allan, brought them in.

“If I could have more I’d have more, but the prices have gone crazy these days,” he says.

Even though her husband started the pinball buying spree, Harriet, also chief financial officer for the UC Foundation, admits that she enjoys the pinball machines.

“I used to play every night. Now I mainly play when we have friends over and also on the weekends,” she says. “One of our sets of friends were here and they wouldn’t leave. They said, ‘Our babysitter leaves at 10:30’ and at midnight they were still playing. “

But she does have her limits. Allan purchased a machine called Party Animal, but it was sold fairly quickly. Harriet wasn’t a fan.

Finding used pinball machines isn’t terribly hard. If you don’t want a replica—and most pinball aficionados don’t—there are websites listing the genuine articles for sale. Message boards on fan forums such as Pinside or Pingeek will have them or tell you where one is for sale. You can find them on Craigslist or Facebook or eBay. You can attend one of the conventions—there are lots—around the country, including Southern-Fried Gaming in Atlanta, which is where Allan bought his first one.

His debut machine—Ghostbusters—was purchased in April 2017, but he didn’t have any place to put it. Except the dining room. What started as a single pinball machine turned into three over the next few months.

“I was popular,” he says sarcastically.

The machines had to be in the dining room, however, because it took Allan about eight months to create a special place for them in the basement. A very special place. The crawlspace, in fact. A 12-by-8-foot space with three feet of dirt filling it from end to end.

He hauled 33 tons of dirt out of the space—“in buckets, up the stairs, three dumpsters’ full,” he says—installed steel I-beams to brace the ceiling, wired the space for electricity and built air conditioning ducts. His 27 years as a contractor in his home country of England was invaluable.

But he wasn’t done. He turned the basement proper into what may be the coolest boy’s toy room ever. It has 5.1 Dolby sound system a PlayStation and a Wii. A wine cooler, complete with thick glass lid and lights, is dug into the floor. Future plans include a massive flatscreen TV and movie-theater seats to complete (for now) the setup.

“He used my email and Amazon accounts and I’d get emails saying, ‘You’ve ordered thus and such.’ We used to tell our friends that the game was ‘What has Allan done today?’ But it kept him busy,” says Harriet.

Some of Dooley’s machines are a throwback to his younger days when he was growing up in Athens, Tenn. Time spent at the roller-skating rink or bowling alley meant time at the pinball machines.

“I spent more time playing pinball than I did the other things,” he says.

Along with his love of the game, though, is an appreciation for the look of them, especially the “playboards,” the flat, decorated surfaces that the pinballs fly forward and backward, over and under, up and down.

When Dooley found the game Xenon, for instance, it was being stored in a barn in South Carolina.

“It actually had rats living in the cabinet,” Dooley says. “It was really, really bad. It cleaned up pretty well.”

Allan says he’s done some repair work on them here and there, but hasn’t rebuilt them entirely. Mainly he’s had to rewire parts that were damaged by acid leaking from batteries inside the machines. “Nothing crazy-technical,” he says.

Dooley, on the other hand, can fix the machines from stem to stern, often buying machines that need work. Some don’t work at all; others need a touch of TLC here and there.

“I can wire and solder and fix logic boards, power supplies, driver boards, soundboards,” Dooley says “I’m pretty adept at working on them. I can’t always solve the problem, but I can usually figure it out.”

But it can take a while. He figures he put in 60 hours refurbishing the game Medusa over six months.

“Sometimes I like to get up early, get up at four o’clock in the morning, get a cup of coffee and come down here and tinker for an hour,” he says.

Rescuing these games and returning them to former glory is an ongoing mission for him.

“Part of it for me is saving these from the junkpile,” he says. “ A lot of these have ended up in landfill, so you find something that’s old from the ’70s and bringing it back to life is enjoyable.” 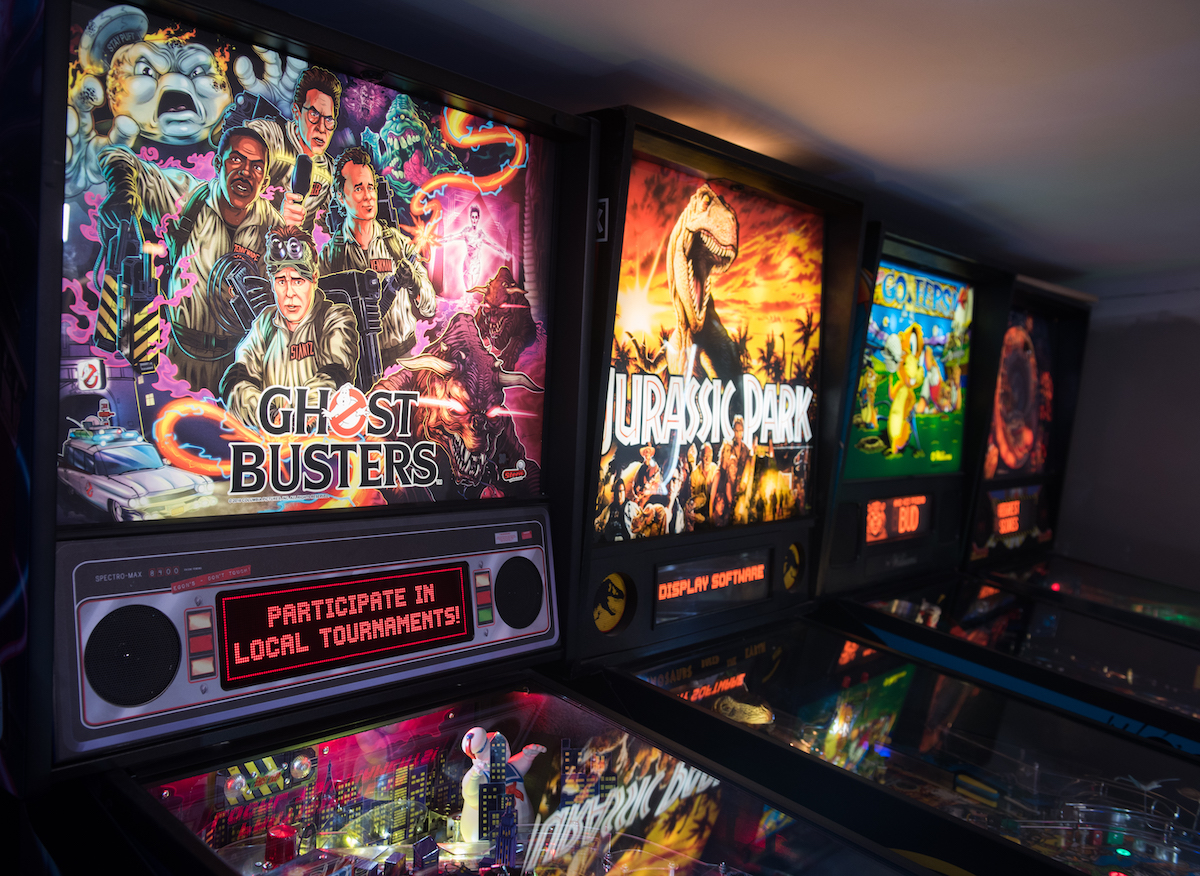 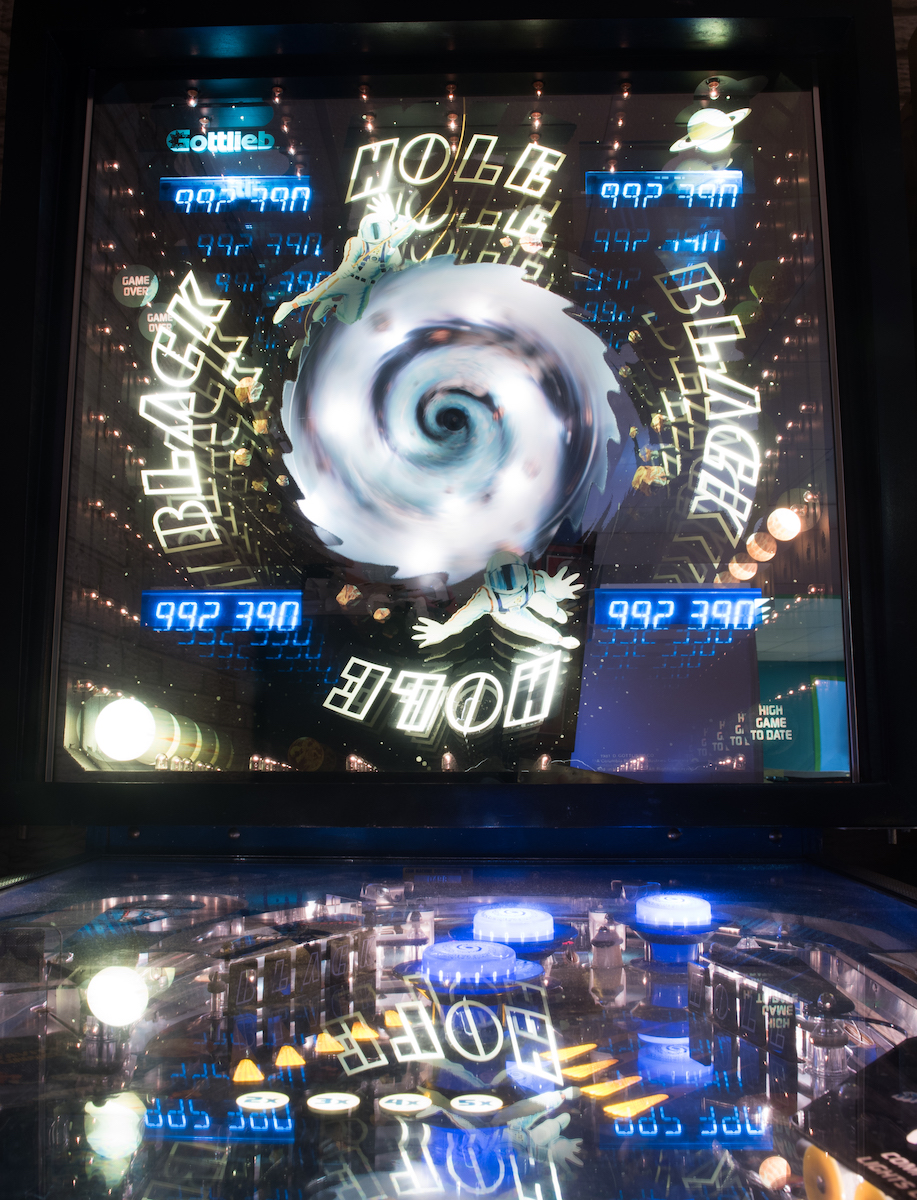 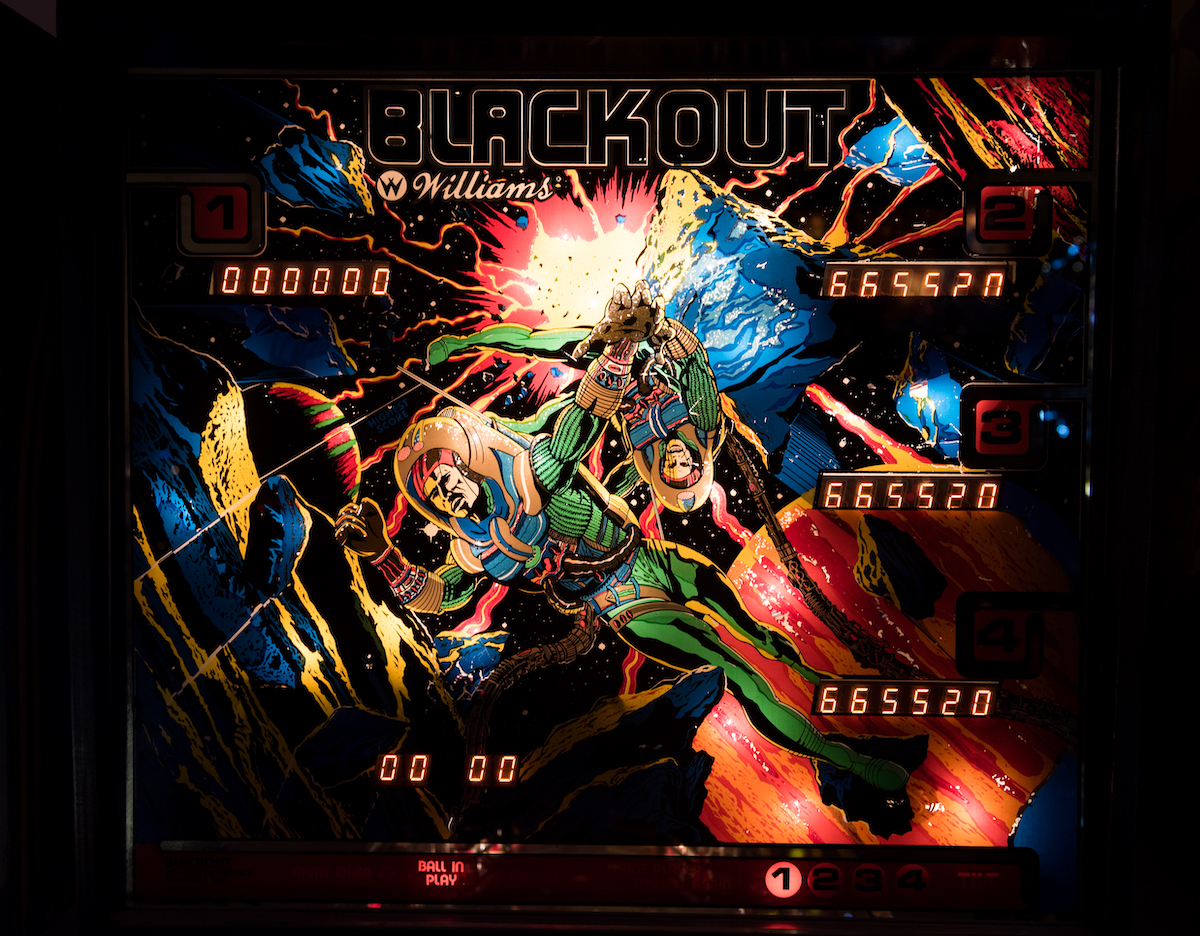 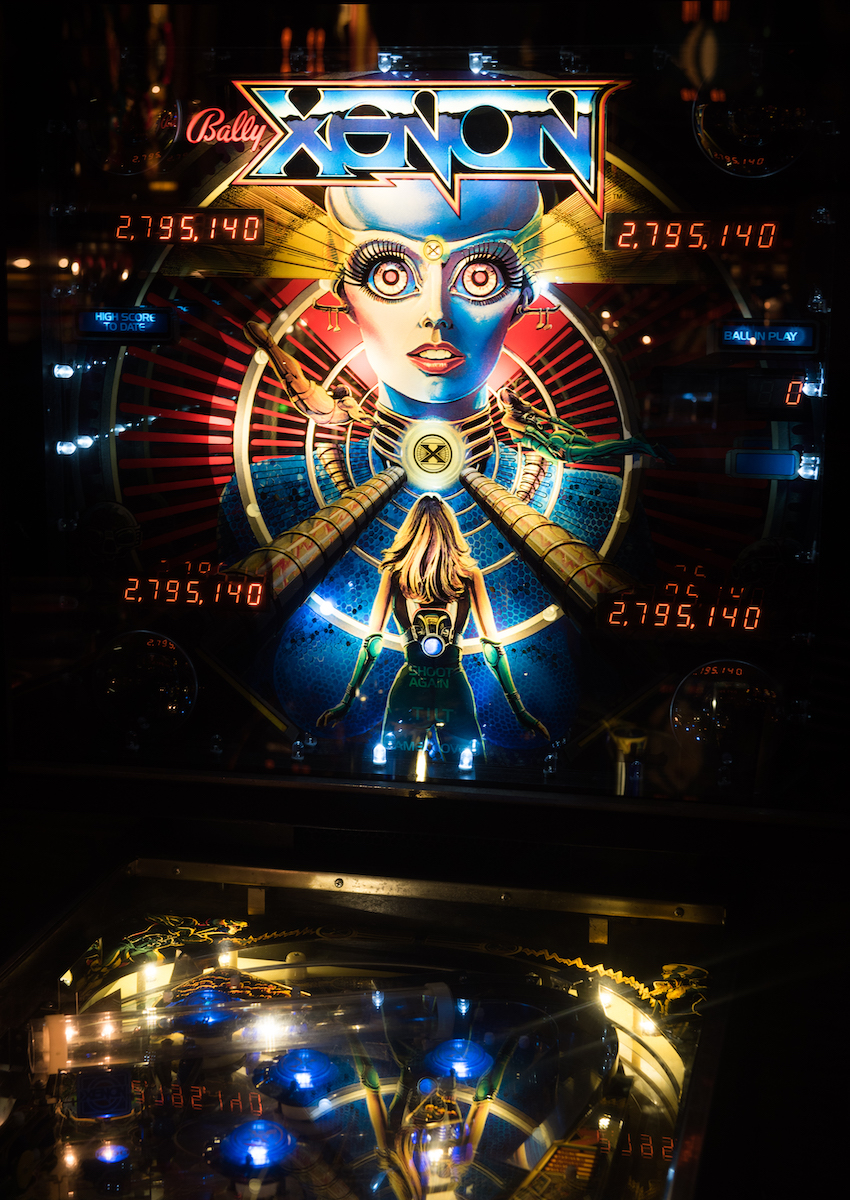 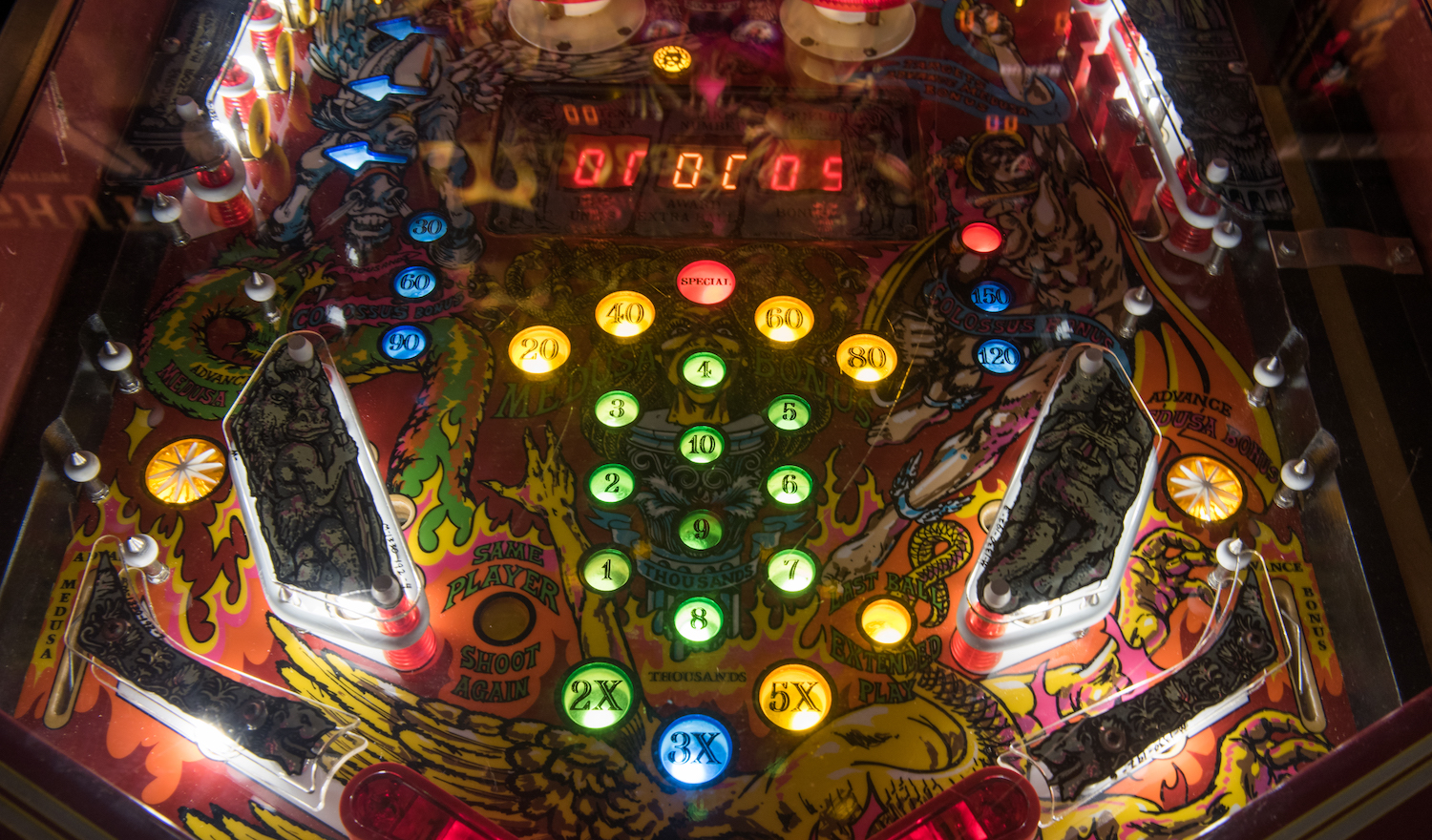 The playboard on one of Robert Dooley’s pinball machines 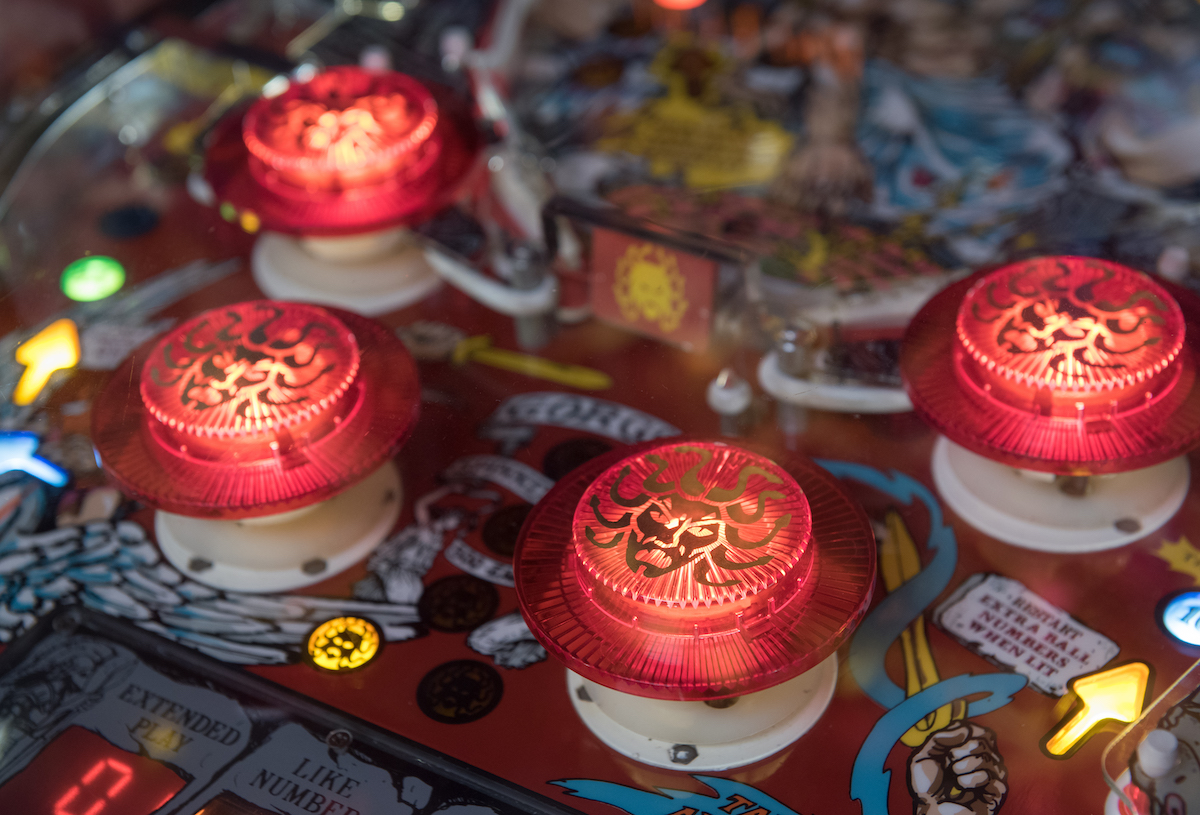 Bumpers on one of Robert Dooley’s pinball machines 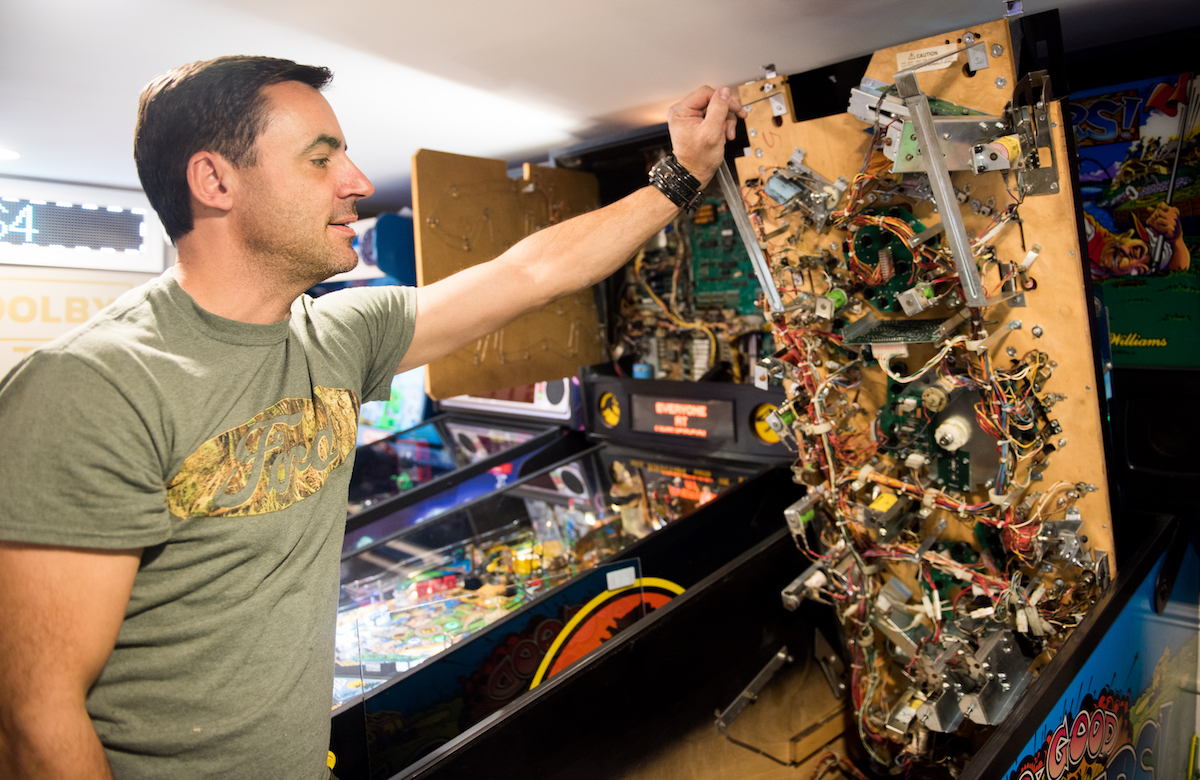 Allan Chambers reveals the complicated electronics that go into a pinball machine. 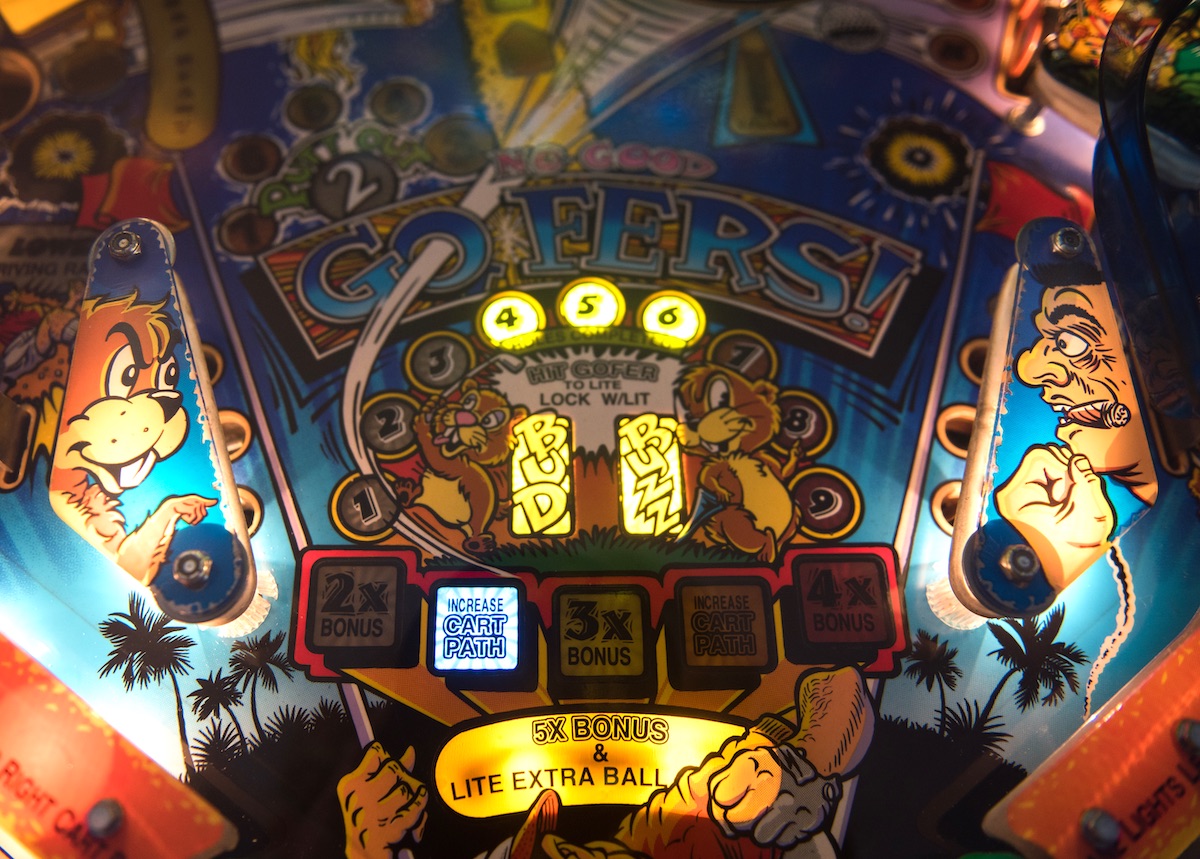 The playboard on one of Allan Chambers pinball machines. 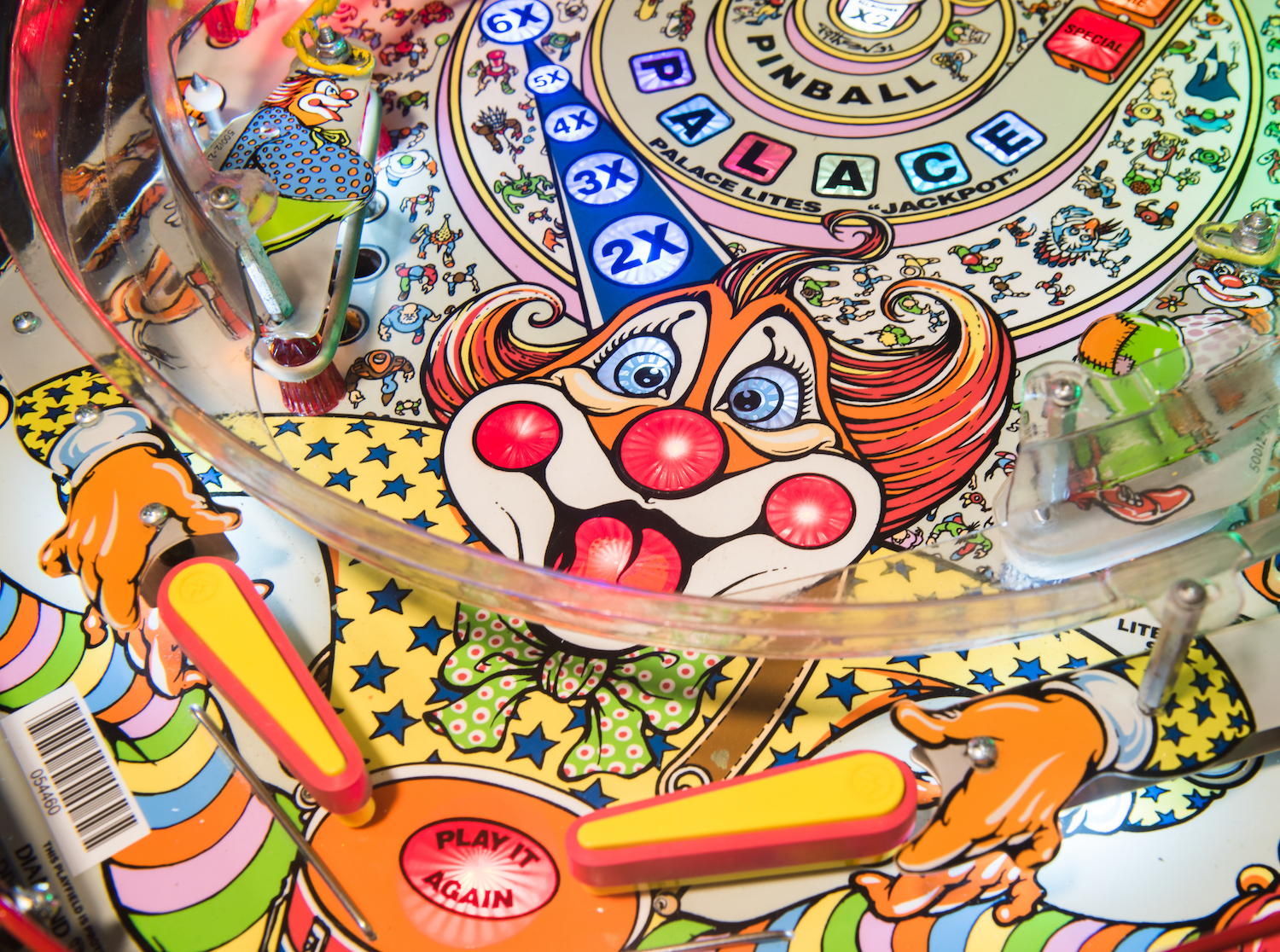