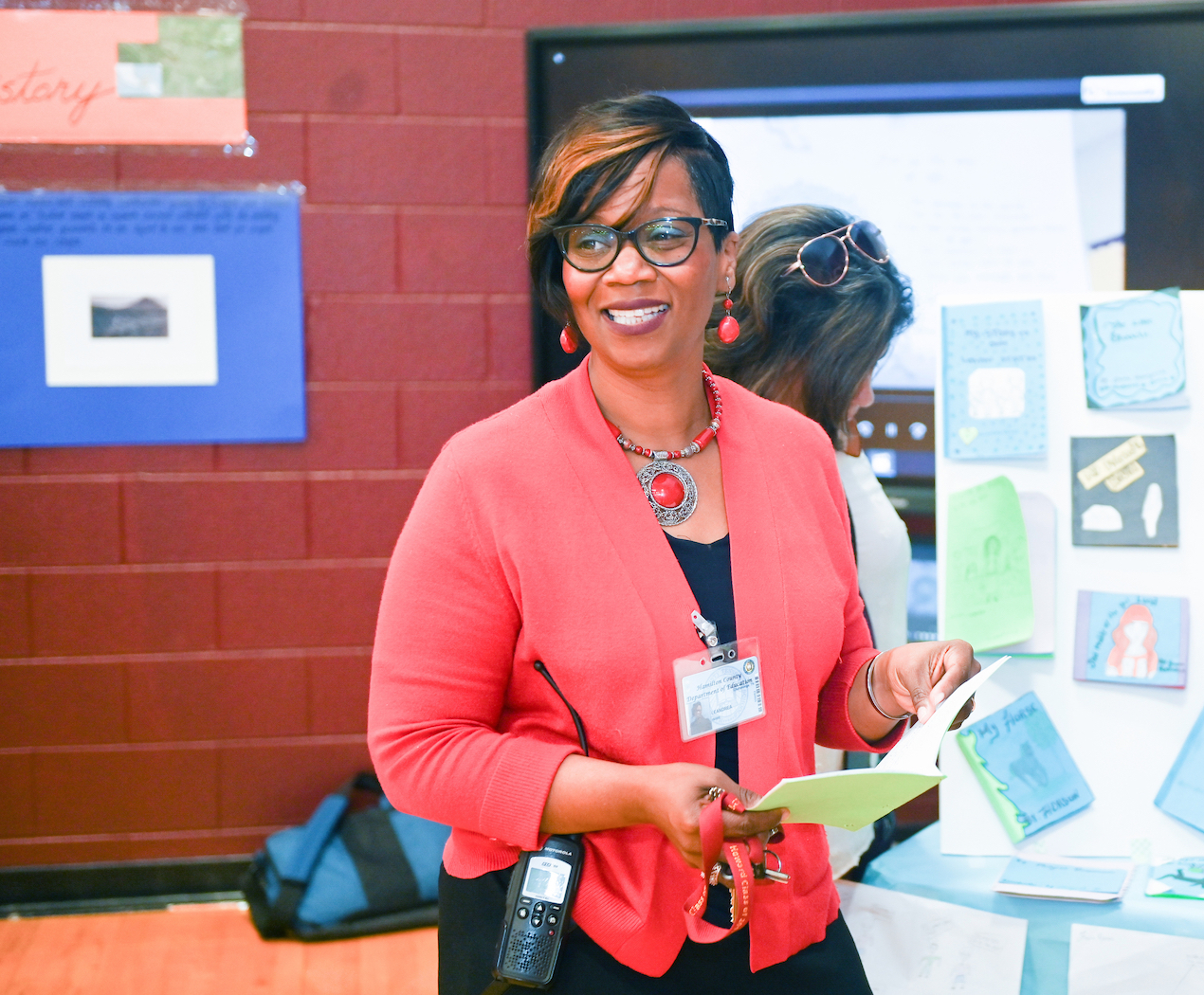 Le Andrea Ware bustles down the hallways at Howard High School, sporting her signature sneakers and a smile.

“I might be cute from head to toe. When I get to my toes, you’re going to see tennis shoes because I make it an effort to be out there among them,” she says. Among them are her 1000-plus students who attend Howard School.

Howard is the oldest high school in Chattanooga. It was built just after the Civil War and has been occupied every year since

It’s only been one year since Ware, who graduated from UTC in 1995 with a degree in multidisciplinary education and became principal at Howard, but she’s already turning heads and making an impact. She has made such a difference that she was chosen as Hamilton County’s Principal of the Year for 2019-20.

“We’re not just Principal of The Year, but I like to call us Howard School of the Year,” she says.

Ware is a Howard graduate and, like many of its current students, she didn’t come from a privileged background. Her mother worked three jobs to keep food on the table. “To come from that background and that understanding of having been a student here,” Ware says, gives her insights on how “to make sure every day is a great day for our students.”

She commands the room she enters, not with a boisterous voice but with a palpable air of confidence and a glowing smile. It’s obvious that, wherever she goes, she loves her students above all else.

“The job of the principal can be so busy sometimes. You’re meeting with everyone… doing a lot of things that are necessary,” she explains. “But I want to make sure that my kids understand that they are what’s important to me.

“It’s all about giving hugs, shaking hands and saying, ‘How are doing? How can I be helpful?’”

Ware compares running Howard to running a small nation. She had to be diplomatic to get others onboard, but she also had to have a firm hand and make sure the faculty members were ready to be their absolute best — “really solidifying a faculty and a staff of people who were believers,”  says Ware, who also earned a master’s in school leadershipat UTC.

The administration’s commitment to students is strong. “We appreciate and value them, and we’re here for them, kind of like that extended family,” says Ware.

While a student at Howard, she was a member of Upward Bound, a program that helps underprivileged students graduate high school and gain acceptance into college. Ware credits the program for helping her succeed. The time she spent on UTC’s campus as part of Upward Bound helped her connect to the University and gave her understanding of what to expect when she moved from high school to college.

“I do not think I would have been able to be as successful” without Upward Bound, she says.

She began implementing her goals and strategies immediately after she arrived at Howard. One major plan is the Future Ready Institutes in which Howard partners with local businesses to create programs that teach students more than math and English. They cover such fields as health care, tourism, robotics, architecture and construction. Ware believes the Future Ready Institutes can help all students no matter their future path.

It’s a “project-based learning approach where kids have authentic, real-life learning experiences,” she explains. “We build that positive culture and climate.”

She’s also leading the way with a large demographic shift in the school. Previously, Howard was 98 percent African-American but now it’s nearly 50/50 Latino and black. Unifying the two cultures is one of her biggest jobs, she says.

“It has been really challenging for us, but it has pressed us to improve our craft and to make ourselves better.”

And, whatever their background or heritage, Ware understands each student has different needs and needs to be valued for who they are. It’s not just serving them in classroom, she insists. “I always tell our people, if we don’t believe in our students sometimes they won’t believe in themselves,” she says. “It requires us to believe in them to get them to have that self-confidence and build them to where they will believe in their own capabilities.”

As a graduate of UTC, she says the University is ahead of the curve when it comes to supporting new students, especially those with differing needs. The first year of college can be the most difficult, and she believes Howard needs to stay in touch with its students even after they leave.

“When we send our students out now, we try to keep that line of communication open and work with their colleges just to make sure that they can matriculate through that first year,” she says.

She says she didn’t always have it easy at UTC and recalls that her academic advisor told her not to get anymore C’s in her classes.

“I said, ‘OK’, and I didn’t make any more C’s,” she says. “Sometimes, it just takes that person challenging you to a higher level of expectations to make sure that you press through.”

Once Howard students graduate, Ware wants them to be able to say that she gave everything she had, adding “210 percent every day” to take care of them and make sure they have the best educational opportunities.

And success for students is traced far beyond her work, she says. It’s everyone at Howard.

1 Comment » for Le Andrea Ware: A principal with principles