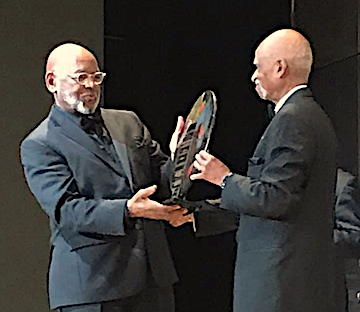 An internationally renowned composer, arranger, conductor, pianist, former UTC professor, he conducted the first concert of the African American Music Series at Carnegie Hall. He is the founder and CEO of MAR-VEL, a publishing company specializing in African American musical traditions. His compositions and arrangements have been assembled in the collection, Our Musical Heritage.

Once called the “woman who launched a thousand careers,” she created McLin Opera Company in the 1950s, Among the list of her students are Mandy Patinkin, Kim English, Chaka Khan, Mark Rucker, Nicole Heaston, Tammy McCann and Robert Sims.

Composer, arranger and vocal coach, she trained at the Juilliard School, Howard University and Columbia University. She has arranged concerts for many opera performers, including Grace Bumbry, Denise Graves and William Warfield.

A week or so ago, UTC professor emeritus and retired music faculty member Roland Carter walked across the stage in New York’s Lincoln Center and was handed a Master of Spirituals Award for his work preserving the religious music of African Americans.

His reaction to the international prize?

“What can I say? I really think I’m overrated,”Carter says with a large laugh. “I think people give me far too much credit for what I’ve been able to do or have done.”

But then he says, in the spirit of giving thanks, just like some of the songs he has lovingly tracked down, arranged and preserved over the decades: “It’s a great feeling to be recognized for those achievements.”

The Master of the Spirituals Award is hardly the only prize Carter, who retired from UTC in 2013 after 23 years, has received over his decades-long career. And, though he no longer on the university faculty, he still teaches through near-constant requests for his skills as a conductor, composer, performer and musical authority.

Among his celebrated arrangements are “Lift Every Voice and Sing,” “In Bright Mansions Above” and for the poem “Hold Fast to Dreams” by Langston Hughes.

In fact, one of the great thrills of the awards ceremony in New York, he says, was hearing eight of his works performed by a choir of international singers.

“Just to have your works performed by those guys, it was exhilarating to listen to them play the works as their own. When I write a piece, you don’t necessarily have to do it my way. You have to bring my something of yourself to it.

“I only ask that you don’t change my notes; don’t change those,” he says with another laugh (he laughs a lot). “Let your spirit come through in terms of your interpretation.”

These days, a good bit of his time is centered on his nonprofit, the Roland Carter Institute for Studies in American Music, which supports artists performing and preserving African American music. As part of the institute’s work, he’s in the process of cataloguing about 3,000 pieces of choral, spiritual and other musical pieces.

“I’ve got all the stuff in boxes and file cabinets,” he says. “So that’s what I’m about these days.”