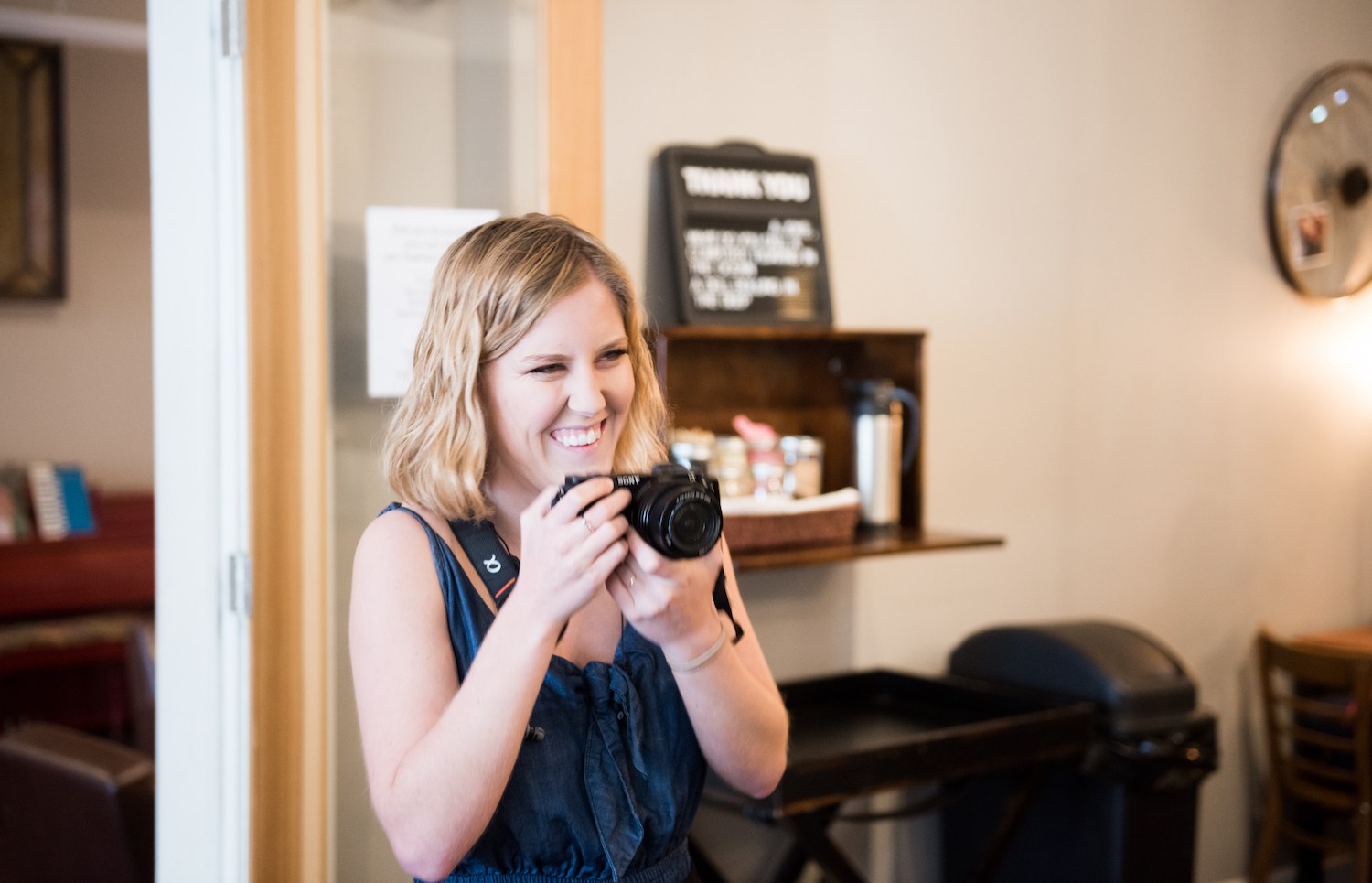 Alex Ogle is a communication major pursuing a career in photojournalism. She is also legally blind.

Ogle has 20/60 vision in her right eye, which means she must be 20 feet away from an object that a person with normal vision can see at 60 feet. Her left eye, though, barely sees anything at all. “It’s kind of useless,” she says. “I see out of it, but not clearly.”

Her love of photography came unexpectedly.

“I took photojournalism and didn’t think I would like it, but it’s amazing.” Classmates who had taken the course, Photo Journalism 1, kept raving about it being the best class ever and Alex decided she had to take the course. While her main motivation was to learn, there also was this one, little nagging matter at home. Alex’s sister had complained about Alex’s photos. She wanted to prove she could improve to sis.

Ironically, Ogle couldn’t figure out how to turn on the camera when she started, but she quickly learned the basics. With her challenged eyesight and lack of peripheral vision, Ogle uses a camera with autofocus to take clear photos. “I need to be able to zoom in and make sure it’s sharp,” she says.

It might seem obvious that she would struggle in photography, but Billy Weeks, UTC lecturer in communication and a professional photographer, says differently. “Her images were unique from the beginning,” he says. “She’s really able to simplify what a photograph should be.”

Ogle was born at 24 weeks, when around 40 weeks is normal. She weighed one pound, five ounces and lived in a neonatal intensive care unit for three months. “We were told at the time that she had a 15-20 percent chance of survival,” says her dad, Scott.

Doctors learned Ogle had retinopathy of prematurity, a blinding disorder that affects premature infants weighing around 2¾ pounds or less. It usually develops in both eyes and is the most common form of visual loss in children. There are varying stages of the disease, which means it repairs itself in some children while others have severe visual impairments for life.

Ogle’s doctors suggested laser eye surgery when Alex was one month old to correct or, at least, save the small amount of eyesight she had. If they performed surgery, doctors said, they’d have to do it immediately once detected. The family chose surgery.

When she takes on a photography projects, Ogle concentrates on a single subject, getting her lens very close to what she’s shooting so she can make sure the shot is in focus. The technique helps her tell a visual story through a series of photo projects that involve multiple photos taken over time, she says. It also allows her to show the empathy behind the subject.

“Those to me have the most impact,” she says. “One of my favorite parts about photojournalism is the empathy.” Alex’s photos show depth, human character and emotion in every still image.

There are times when her eyesight means she can’t tell whether the photo is in focus before she takes it. It can be aggravating and disheartening, she says. “I see it differently, and sometimes it can be really frustrating,” she says.

Her parents say that, even though their daughter’s eyesight issues have always been in the back of their minds, they’ve never treated her differently or tried to overprotect. She’s played T-ball with her neighborhood friends and joined some classmates on her high school color guard. Ogle’s grades were never an issue, either. She’d sit on the front row of classrooms to be able to see better, and it would take her a bit longer to get assignments done. But she completed every assignment with driven, diligent work.

“She works harder for everything she has,” says her mother, Lisa Ogle, “and has always been a perfectionist. It’s not surprising she does the same with her photography.”

Yet there have been a few health scares. There’s a relatively high possibility that Ogle’s retina will detach from her good eye, taking her sight away entirely. In one horrifying incident, she and her friends were playing baseball in the yard when a friend swung back with the bat and accidently hit Ogle in her good eye. Luckily, no serious damage was done. “It was the one thing we were always told to protect,” her mother says.

Transportation also can be an issue since Alex is unable to drive, but she rides her bike or walks to classes, getting around campus as easily as any other student.

Ogle plans to graduate in fall 2019 and is hoping to land a photojournalism job, hopefully in a metropolitan area so she can use public transportation. “I would love to travel in really cool places and possibly live in New York,” she says.

Her parents support their daughter, but they also have normal concerns. Her father knows there are inherent risks with her future plans, but “I just want her to be able to do things she loves to do and be self-sufficient,” he says.

Even without her photography skills, Ogle is special, Weeks says. “Take away all of her great writing and photography and she’s just a great person.”