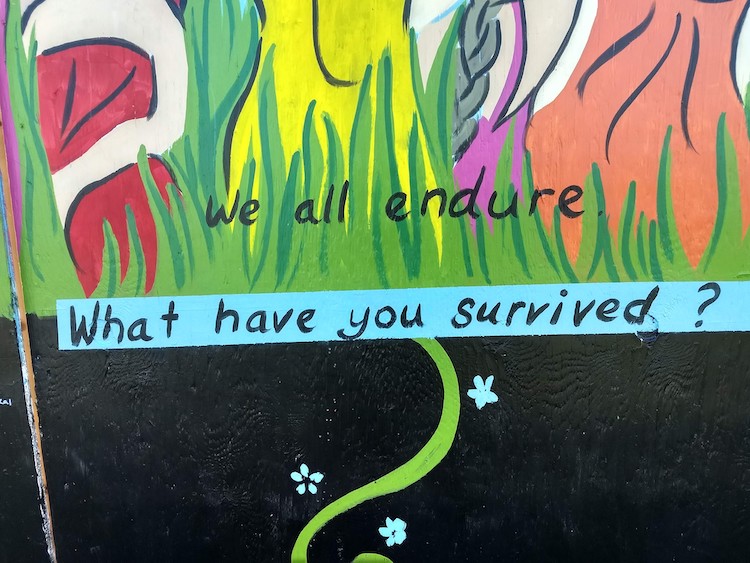 The words were part of a mural displayed at this year’s Bonnaroo Music & Arts Festival and painted by Ruth Park, an art student at UTC.

“Those words came to mind when I thought of women I knew,” she says. “I put them up there as an invitation to think of the mural as a tool to describe ourselves and perhaps provoke a way of thinking that was a narrative as we sought to share stories about our lives.”

The mural—12 feet long and eight feet tall—depicts a group of women of all shapes, styles and colors who are enjoying the festival. Along the bottom is a black-painted area for women to contribute their ideas and stories to the mural.

Park was commissioned to do a mural celebrating women for the “She-roo” camp at Bonnaroo, a music and arts festival that has been held in June on 650 acres in Manchester, Tenn., since 2002. Participants set up camp for the four-day festival and some camps are specifically designed for women, families and others.

She was contacted by producers of a group called Mothership, which runs She-roo, a camping area for women and transgenders who, during the festival, call themselves “Bonnaroovians.” After the initial interview, she submitted the design and the She-roo managers quickly decided she was a great fit.

“When I told her (the producer) my idea, she became very excited. She liked my energy,” Park recalls.

Park wanted to do something “meaningful,” she says, so women could feel free to be vulnerable and open to sharing more about themselves, whether that’s fears, triumphs or what they’ve survived.

Along the upper part of the painting are words such as “warrior,” “mother,” “survivor,” “delicate” and “lover.” Near the bottom of the mural it says: “We all endure. What have you survived?” The bottom and sides are painted black, so women could use white markers to add stories and information about their lives. Among the written thoughts are:

“Birthing, breastfeeding and watching my babies grow up and enter the world. Bittersweet.”

Park says she believes all women survive traumatic moments and “those things don’t define us but can have a huge impact on our lives.” That belief formed the central idea for the mural, she adds.

“The idea was born to do a simple image of women enjoying music plus the question ‘What have you survived?’” she says

With her mural on display, Park attended Bonnaroo for the first time in June and says she loved the experience.

“I’m amazed that there are women making events like this for other women. So many people came together and poured their hearts into She-roo to make it work.”