by UTC Communications and Marketing August 27, 2019 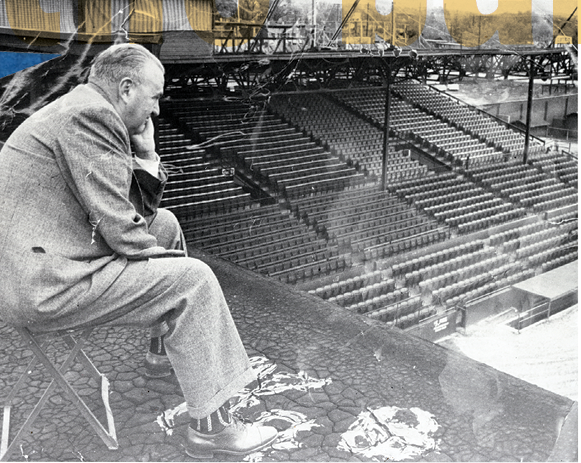 Joe Engel sits on the roof of Engel Stadium and looks at the empty bleachers. It was about this time that the fate of the Lookouts as ball team was in question.

Summer has arrived and with it comes outdoor fun in the sun. One of the most popular ways to enjoy the season is watching America’s favorite pastime, baseball. Chattanooga is home to one of the oldest baseball parks in the country, Engel Stadium, which opened to the public in 1930 and was the home of the city’s minor league baseball team, the Chattanooga Lookouts, for 68 years. Today, Engle Stadium is owned by UTC.

When viewing photos of the stadium, one can feel its storied past emanating from the architecture by imagining again the crack of the bat wielded by some of baseball’s greatest players, the smell of popcorn and hot dogs  and practically see the fans of decades past cheering on their team from the stands. 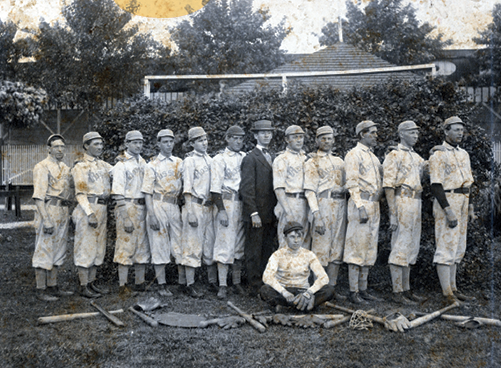 The 1908 Rossville City League baseball champions. Players are in uniform with the coach in the center wearing a suit and hat. The young boy on the ground is the bat boy.

Engel Stadium was the stage for many momentous events in baseball history. One of the greatest moments came in an exhibition game. In 1931, the Lookouts signed a 17-year-old pitching phenom named Jackie Mitchell, a woman. Later that year on April 2, Mitchell made history during an exhibition at Engel between the New York Yankees and their farm team at the time, the Lookouts, when she famously struck out Yankee legends Babe Ruth and Lou Gehrig back-to-back to the roaring thrill of the crowd.

A young Willie Mays, playing for the Chattanooga Choo-Choos of the Southern Negro League, ran wild on the bases at Engel Stadium in 1947.

Today, few minor-league baseball stadiums can boast of such memorable moments and Hall of Fame players who graced their playing field. During the ’60s and ’70s the stadium began to fall on hard times, and on Sept. 10, 1999, the Lookouts played their last home game at Engel. The ballfield briefly experienced renewed interest in 2012 when filmmakers selected it as one of the locations for the motion picture “42: The Jackie Robinson Story.”

Due to the Engel Stadium’s undeniable historical significance, the National Register of Historic Places approved it as a structure worthy of preservation in 2014. UTC partners with the Engel Foundation and Cornerstones, a local historic preservation nonprofit organization, to maintain the stadium’s integrity as a historical landmark. Engel Stadium is not only the historical home of the Scenic City’s Lookouts, it’s a landmark where generations of Chattanoogans have gathered and cheered for the home team.