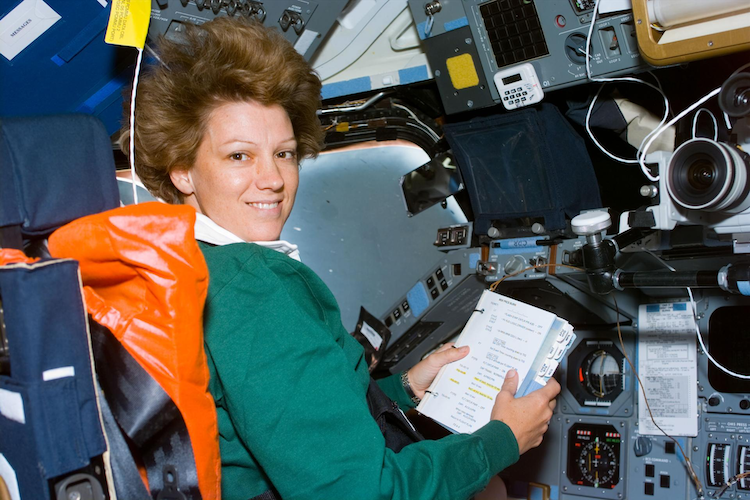 Eileen Collins looks over a procedure handbook while sitting in the commander’s seat of the Space Shuttle. On this 1999 mission, the shuttle was deploying the Chandra X-Ray Observatory above the Earth’s atmosphere.

Eileen Collins has flown four missions on NASA’s Space Shuttle, but one moment sticks out in her mind.

“It was on my very first flight in 1995, when I first saw a sunrise from space,” she says.

At the time, she was still in astronauts’ familiar orange pressure suits and concentrating on various technical tasks inside the shuttle.

“Busy, busy, busy,” she says. “Then one of the other crew says, ‘Look out the window. Here comes your first sunrise in space.’

“I could see the curvature of the Earth and all these colors—red, yellow, orange, blue, white. It’s like looking at a rainbow.”

While she was too busy to think about it at the time, she later realized she had achieved her lifelong dream.

“Being an astronaut was something I had wanted since fourth grade and here I am. I finally made it years later.”

Collins, 62, the first female pilot and first female commander of a Space Shuttle mission, will be in Chattanooga on Thursday, Sept. 19, by way of computer at UTC’s Challenger STEM Learning Center. In a Skype chat from her home in San Antonio, Texas, she will be talking with a group of 65 ninth-graders from the Chattanooga Girls Leadership Academy.

Speaking with Collins is part of a class project that involves rocketry, says Charles Cole, high school science teacher at CGLA. Learning the basic principles of rocketry, groups of students will design and build a working rocket and eventually display and discuss them during CGLA’s STEM Night.

Cole says the students have researched Collins and have a list of questions for her, including:

Catherine Clifford, development coordinator at CGLA, notes that the world of astronauts “is male-dominated and only a few females have made it to the top of that field. So I think it’s showing the girls that anything is possible. Developing leadership skills is certainly one of our missions at CGLA.”

And that’s one of the key messages that Collins wants to give the students.

“I encourage them to not give up, not to worry that this career or that career is traditionally men because women can do a variety of jobs and women should look at all options and pick the career they want. Look at what I did,” says Collins, who retired in 2006.

What she did was become a pilot in the U.S. Air Force in 1978, two years after women were first allowed to be pilots. She and three other women were assigned to flight school at Vance Air Force base in Enid, Okla.

“There were 500 pilots on the base and we were so noticeable, a woman walking around in a flight suit. … They knew when we did well; they knew when we failed. But we were passionate about flying and that’s the reason we made it through. We tried not to get involved in all these women’s issue and focus on being the best pilots we can be.”

And yes, they understood the fact that, if you include the Space Shuttle, most missions are dealing with billions of dollars of equipment.

“That’s a very important factor in our training. The crew does not want to make a mistake,” she says.