by UTC Communications and Marketing September 18, 2019 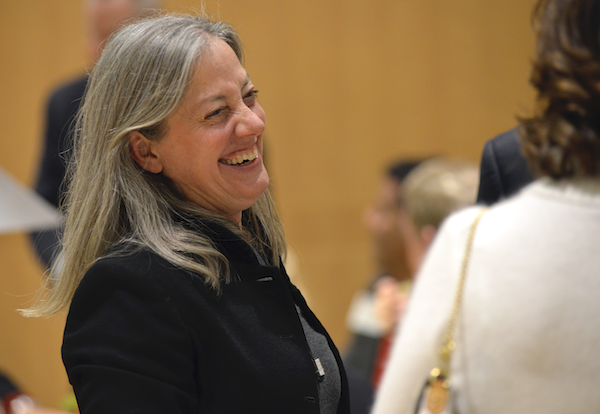 Honors College Dean Linda Frost has won the 2019 Sam Schuman Award for Excellence at a Four-Year Institution from the National Collegiate Honors Council.

The council is the umbrella group for honors colleges across the country. The Schuman Award is meant “to recognize those who are making outstanding contributions,” according to the NCHC website.

“Sam Schuman was one of the founding fathers of the National Collegiate Honors Council,” Frost says. “He was an icon of compassion and intellectual ferocity and a powerful voice and steady leading hand in whatever he did.

“It is not just an honor to receive an award like this in his name but something more along the lines of divine affirmation. I love the honors community and I am humbled and thrilled by their recognition of my work in this way.”

Ada Long, founding director of the Honors Program at the University of Alabama at Birmingham, says Frost is a power-packed bundle of energy.

“One minute she’s three inches from your face, waving her arms in excitement about some new idea she has for an honors project,” Long says. “The next minute she is running to hug a former student, and then she is ducking into a conference room to give a presentation.”

Schuman, who passed away in 2014, was an accomplished scholar, professor, administrator and the author of Beginning in Honors: A Handbook. Winners of the award receive an engraved plaque along with $500 for the honors program to be used at the discretion of the director.