Seismometer on campus detects tiny vibrations in Earth, even from Hurricane Dorian 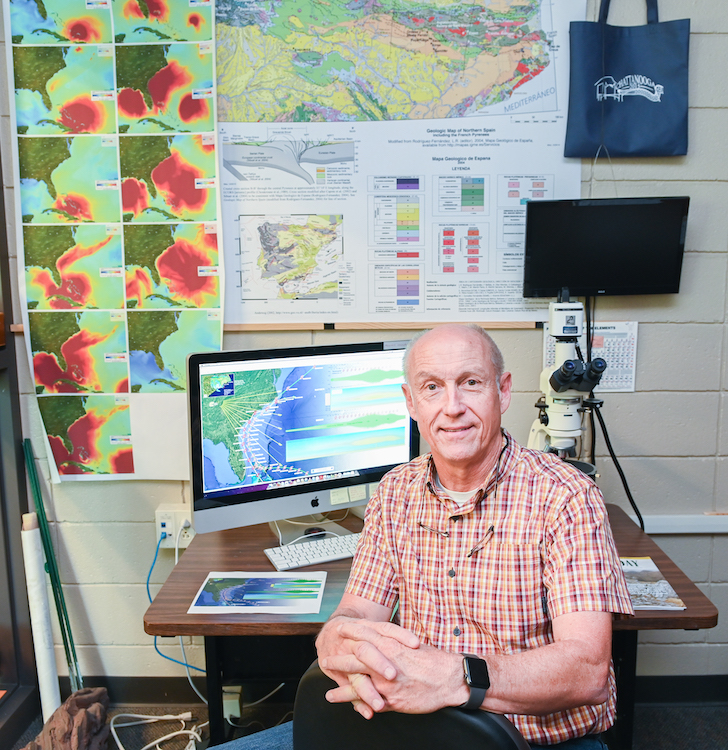 The equipment that John Mies uses can detect earthquakes on the other side of the Earth.

When North Korea fired off its nuclear missile test on Sept. 3, Jon Mies could pinpoint the exact moment the launches took place.

How? An earthquake-detecting seismometer on the UTC campus picked up vibration, which showed up as a spike on the machine’s readings.

“It was small, tiny. I had to look pretty hard for it. But sure enough, we’ve got a little ‘tick,’ ” Mies says. “That’s a man-made earthquake. Gosh, it’s tragic, but interesting in the way that we could detect it.”

Mies’ eyes practically sparkle when he starts talking about the campus seismometer and how it’s sensitive enough to read the slightest earthquake tremor—known as a microseism—even though it’s measured in nanometers.

“They’re vibrations so small, we don’t sense them,” says Mies, UC Foundation R.L. Wilson professor in biology, geology and environmental science. “I can tell the difference between the Monday-Wednesday-Friday schedule here and the Tuesday-Thursday schedule because everyone moving on campus shakes up the ground.” 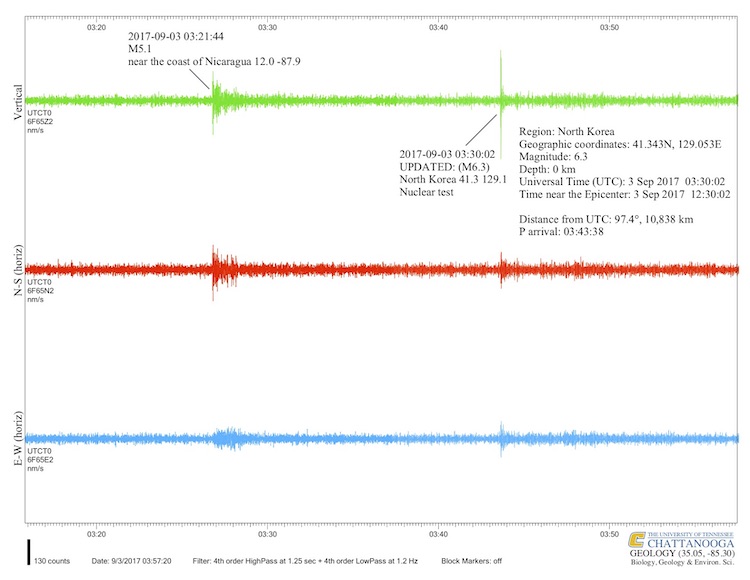 This is the electronic readout that shows when North Korea conducted a nuclear missile test. The green spike is the moment of launch.

While the equipment is used in classes that deal with earthquakes, it recently picked up information on the effects of Hurricane Dorian from an earth-shaking point of view. The information collected had nothing to do with the strength of the storm or its destructive power, but the data revealed wave patterns on the ocean and how they were—or weren’t actually—affected by Dorian.

It’s easy to see waves generated by the hurricane as they rush toward the coast, Mies explains, but once they hit the coast, new waves rebound back to the ocean and it’s very hard to see them. The rebounding waves hit the incoming waves and the collision creates a water column that moves up and down, exerting pressure on the ocean floor.

“It’s pulsing, kind of like doing CPR on the ocean floor, and that is causing the vibration in the earth’s crust that is radiating from that spot,” Mies says.

The vibrations were picked up by the seismometer at UTC. Like a proud papa, Mies points out the machine’s readings. The three lines, which look like the waveforms from software that opens an audio file, are different colors—green is up/down, red is north/south, blue is east/west. The thickness of the lines reveals the size of the tremors and, while Dorian’s wave-generated tremors were pretty much constant, coming every six or seven seconds, they were miniscule in comparison to a true earthquake.

At this point, seismometers can’t detect a hurricane’s strength; a Category 4 storm generates the same wave pattern as a Category 1.

“You’ve got a lot of variables here,” Mies says. “You’ve got the storm’s distance from the coast; you’ve got the shape of the coast—I actually think that’s very important—you’ve got water depth. They’re almost never controlled. A storm comes and Mother Nature doesn’t comply very well.”

So what’s the practical uses from detecting the waves’ tmicroseisms? Not much right now, Mies acknowledges, but that’s doesn’t mean they’re useless.

“Right now what we’re talking about is largely an academic interest. Academics tend to relish this kind of thing.

“But it probably has hidden uses. Along those lines, it will have applications somewhere else. It’s not like it’s without purpose, we probably don’t see those purposes yet.

“And that’s the way a lot of this works. There’s a lot of science that begins sort of esoteric and lo and behold there’s an application of it somewhere.

“Somewhere way back in the history of Corningware, some other scientist said, ‘Wait a minute, this material is marvelous. Let’s make this out of it.’ Something like that.”