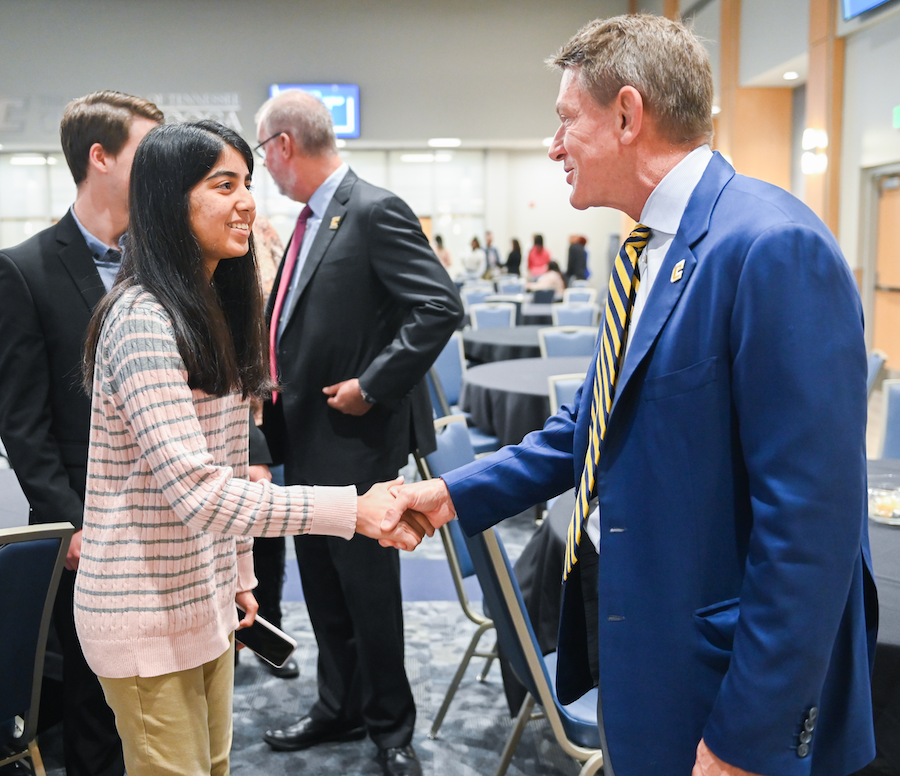 Randy Boyd, interim president of the University of Tennessee system, spoke with many business students at the annual Entrepreneurship breakfast.

You’ve got to fail if you want to succeed.

That was the message that Randy Boyd, interim president of the University of Tennessee system, gave to business students, faculty and others at UTC’s annual Entrepreneurship Breakfast.

“I’ve never seen a person that wasn’t successful if they didn’t have a failure along the way,” he said.

And he should know. Boyd is founder and executive chairman of Radio Systems Corp. The company produces more than 4,600 pet products under brand names such as Invisible Fence, PetSafe and SportDOG and has annual sales of more than $540 million.

But as Boyd explained at the breakfast, hosted by the Gary W. Rollins College of Business’ Center for Innovation and Entrepreneurship, he started small. In fact, his first business venture, which he began when he was 23 to sell tornado detectors, failed within six months, he said. It was devastating at the time, he said, but it was also an invaluable experience.

“Getting that first one out of the way is critical and you are learning more through failures than you ever do from your successes,” he told the breakfast crowd.

After that business went under, Boyd started a new business selling electric fencing for livestock—manufactured by his father’s company—to hardware and feed stores around the Southeast.

“That was a very glamorous business,” Boyd said.

He traveled around Georgia, Florida and Alabama in a “big white boat of a van” with no air conditioning and no radio and staying in motels that charged no more than $18 a night. After about six years, his products were sold in 42 states in 2,200 stores and total revenue was $1.5 million.

In 1989, he wanted to sell “invisible” fencing systems for about half what the company Invisible Fence Inc. was asking. He and his wife sunk their entire life savings into it. They hoped to sell 100 units a month at $250 each.

He told the breakfast audience that he knew his life story was “inspiring.”

“And I know that because, one time at a university about five years ago, I told a much-longer version of it to an entrepreneur class and, after the end of the class, one of the young ladies from the class came up to me and she said, ‘Mr. Boyd, your story is so inspiring.’ I could just kind of feel beginning to swell and said, ‘Well, thank you.’