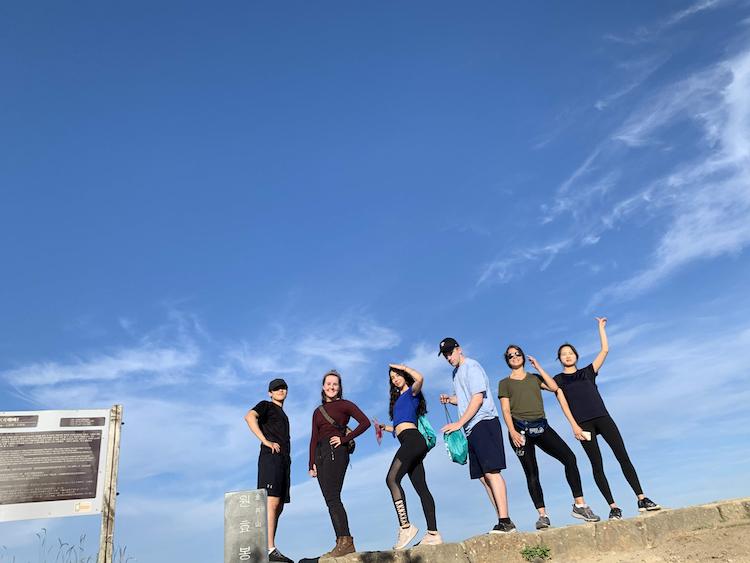 Spending the day outdoors in Korea are, from left, Hansol, Hannah Darlene, Kameron Miranda, and Jihyun.

Rain is common in the South Korean city of Busan, but Hannah Horton found that forgetting your umbrella is not always a problem.

“Someone would see you walking in the rain and they would immediately escort you to your destination,” says Horton, a senior in the UTC Honors College. “They were extremely tolerant and welcoming to us. They were always extremely happy that foreigners were taking an interest in their country and language.”

Horton, who’s majoring in political science with a focus on international relations, spent the summer in Busan—South Korea’s second-largest city—as part of the U.S. State Department’s Critical Language Scholarship. She is the first UTC student to win the prestigious award, in which about 5,500 applicants are whittled down to 550 winners.

“They’re looking for students who want to study a language that’s critical to U.S. needs in some capacity,” says Leslie Pusey, director of National Scholarships and Fellowships at UTC. “In an abstract way, it’s: ‘How does this also help the U.S.?’”

Pusey helped Horton with her scholarship application, which includes several essay questions that must be answered in 300 words or less. For Horton, that meant lots of writing, rewriting and writing again.

“It’s such a rigorous process but so valuable in and of itself,” Horton says. “It’s a moment of self-discovery: Why do you want to go?”

With the help of her friend Hye, whom she met while both were students at Lee University in Cleveland, Tennessee, Horton had a rudimentary knowledge of the Korean language and culture before she spent June through August in Busan last summer.

“She taught me a great deal about the culture.,” Horton says.

In Busan—which sits on the coast in southeastern Korea and has a population of about 3.5 million—Horton roomed with a South Korean student and also worked with a language counselor. They both spoke excellent English—which is taught to Korean children as a required course in school—and helped Horton learn to speak better Korean while also learning more about Korea itself. Both talents are valuable since Horton’s ultimate goal is to work in the East Asia Pacific bureau of the State Department.

“While I may never have a complete understanding of the culture since I did not grow up there, I at least can have a decent grasp so that I can write and apply policy in a way that benefits both the U.S. and Korean citizens,” she explains. “The idealist in me wants what is best for both countries, and this can only be done through a proper understanding culturally and structurally.”

Pusey, who works with UTC students on their applications for various scholarships and fellowships, describe Horton as “genuine.”

“I think what’s special about Hannah is the fearlessness and her values of hard work but also learning grace for herself,” Pusey says. “She has a lot of patience for other people, certainly more than I do.”

Horton’s weekdays in Korea started at 9 a.m. with classroom work that lasted until 1 p.m. She would generally study till midnight. Some weekends included trips to sites of cultural significance in Korea such as Gyeongju, the former capital of the country, but some were assignment-free with time for karaoke, arcades, playing soccer or a trip to the beach.

“Sometimes it would be all of the above,” says Horton, who previously has traveled to Italy, Germany, France and Mexico.

One thing that stuck out in Korea were the parallels between its culture and America’s, she says. In a country where women don’t always have a lot of power and respect, the MeToo movement has taken hold in the country, Horton says.

“From what my roommate told me, women have trouble getting representation in legal cases,” she says. “The laws on sexual misconduct are pretty loose and not refined; their application is not good. This is a global issue that we are trying to learn to fix, and Korea is definitely pushing for reform, especially in the area of law.”

Despite the impression that women might be subject to harassment or degrading treatment by men because of the culture, Horton never had any problems.

“I never felt threatened by any of the men I was around, and they were always extremely respectful, helpful and informative on what to look out for in people who could be dangerous. They were gravely aware,” she says. “My guy friends always made sure we got home safe if we went out.”

Koreans also have a fierce desire to improve themselves, she says, both from a personal standpoint in the people and with the nation as a whole. It could be summed up by the word “hope,” she says.

“They think, ‘We’re going to change this. We’re not going to take this anymore.’ And it takes talking about it.”

She is adamant, however, that she doesn’t want to paint Korea as some terrible place. She definitely wants to go back.

“I love Korea and enjoyed my time there more than anything I have ever done. I think with every culture there are downfalls and that does not make them backward, but human.” 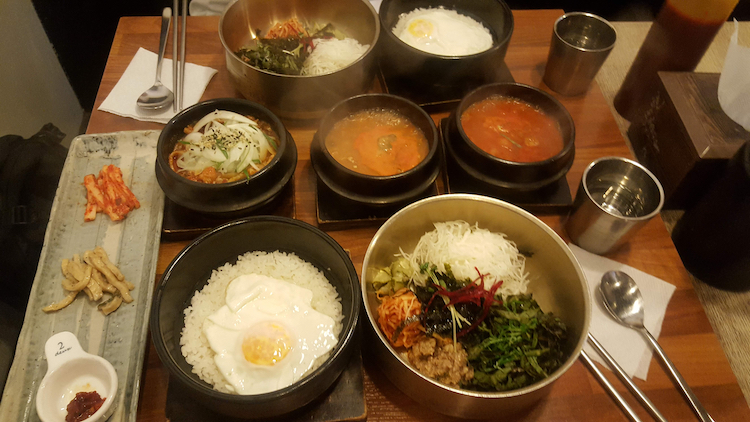 A dinner of Korean food is filled with different dishes. 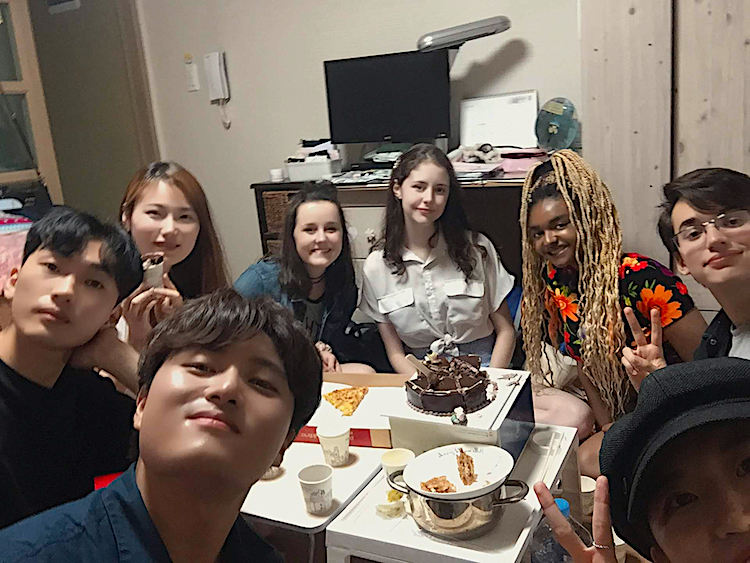 Hannah, in the back, leaning forward and wearing a blue shirt, and a host of the friends she made while in Korea. 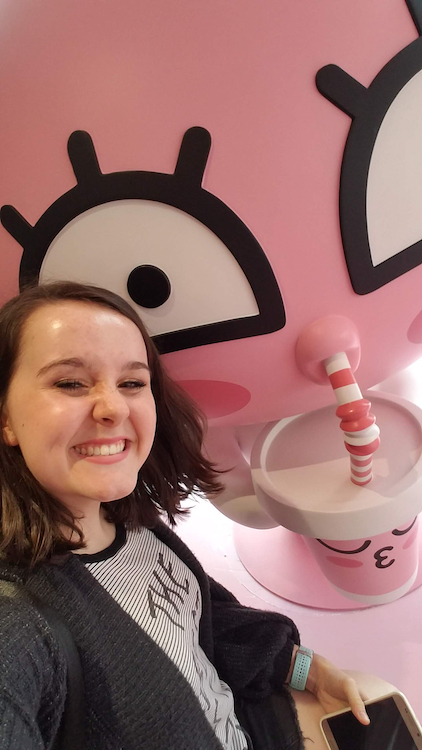 In the Nampo area of Busan, Hannah sits in a cafe next to the super-pink Apeach, a character on the Kakao App, which is sort of like Whatsapp. 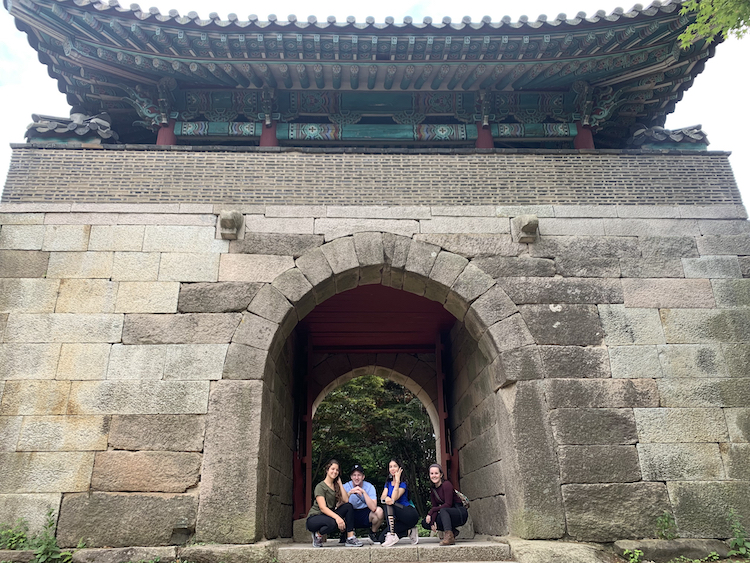