‘We had a lot of bad, bad days’: Dane Snowden recalls life in war zone 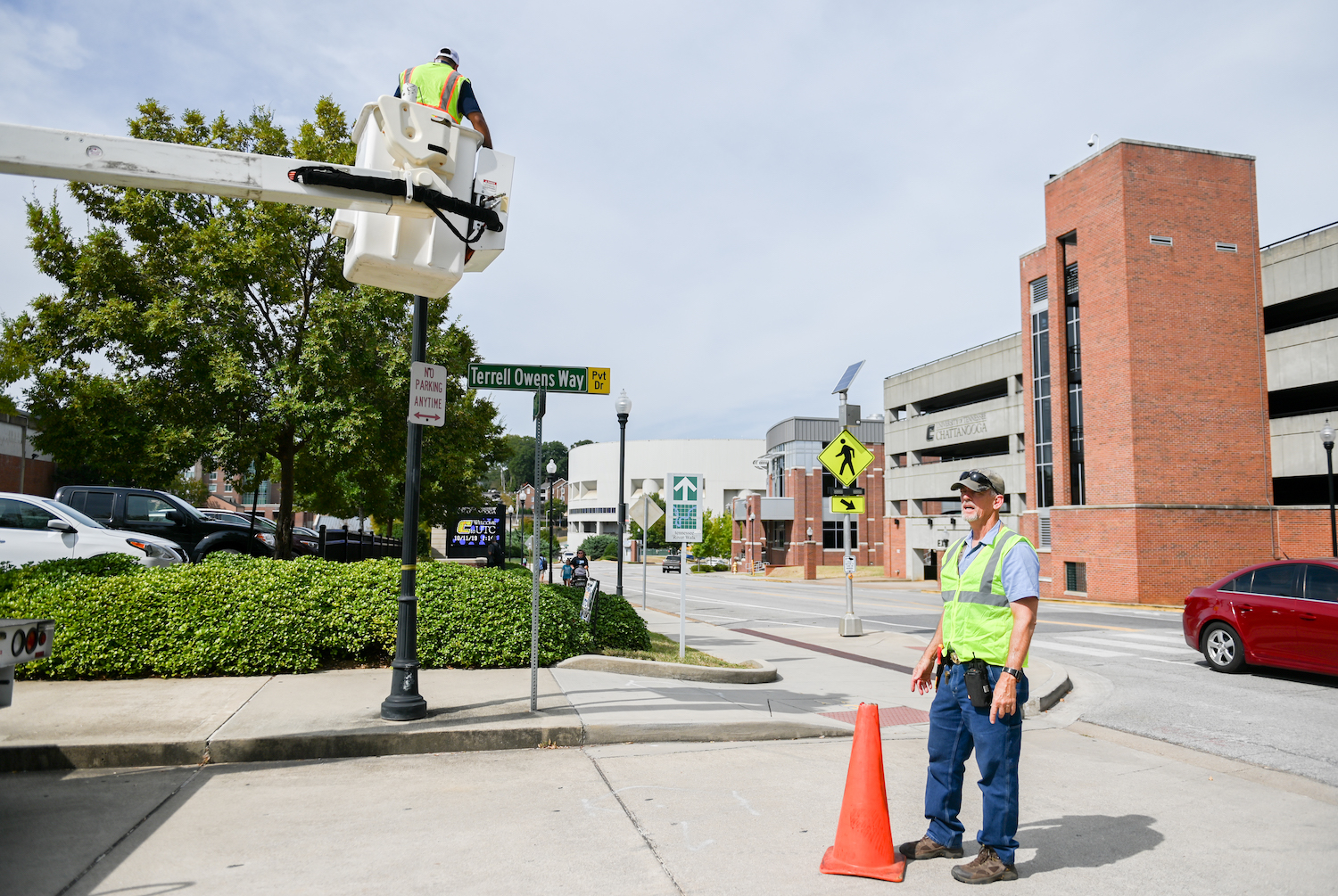 Dane Snowden is one of the supervising electricians in the UTC Facilities Planning and Management Department.

If Dane Snowden had been sitting at his desk, he’d be dead.

Any other day, he’d be handling his daily duties inside the building on the U.S. Army base outside Pul-e-Alam, Afghanistan. Any other day, the mortar round would’ve crashed through the building’s plywood walls and scorched a path right across his desk.

“It would have taken my head right off my shoulders,” he says.

Luckily, he and other soldiers were off base on a security mission to protect others while they met with a local tribal council. Normally, there would’ve been many soldiers inside the building when the round exploded.

“Usually there were like 20 people in there at any one time with computers or something,” he says. “It probably would have killed four or five in there and injured a bunch.”

After 9-11, Snowden, an electrician in UTC’s Facilities Planning and Management Department, encountered his share of mortar and rocket attacks, IED explosions and gunfire during his four tours of duty in the Middle East with the Army National Guard. Friends died; he saw and attempted to rescue Soldiers where their bodies were severally dismembered.

In two separate instances, he was blown out of his office chair when rockets landed about 30 feet away. What most people don’t understand, he says, is that, even if the rocket doesn’t obliterate you, both the concussive force and noise of the blast leave lasting damage.

“Everything inside of your body has been shifted. You feel it. You’re sick for like two days,” he says. “And bells are ringing in your ears. To this day, I’ve lost some hearing.”

But he insists his experiences weren’t different than thousands of other soldiers, male or female, serving in combat zones. And, like so many who suffered in battle, he suffers from PTSD and has been in counseling since he returned from duty for good in 2015.

For 40 years, Snowden—known as “Snowman” in the Guard—served in the military in one shape or form and in one place or another. After 9-11, he was deployed six times, the first came three months after 9/11. Between 2003 and 2011, he was mobilized six times; the last four he was sent overseas, once to handle personnel tasks in Africa’s Djibouti, the others to Iraq or Afghanistan, where he worked in construction, base security, managing personnel and handling transportation issues, among several other jobs.

By the time he retired in 2015, he’d earned the rank of lieutenant colonel. He earned two Bronze Stars, awarded for actions and performance while in a combat zone. In his time away from deployment, he earned a degree from Tennessee Wesleyan in applied technologies, focusing on electrical and electronic engineering.

Each time he returned from active duty between 2002 and 2009, he immediately went back to his previous job at the Mars’ M&M’s plant in Cleveland, Tenn. But bouncing back and forth from active duty to civilian life is hard, he says. The first time he came back to the plant, he knew that things were going to be different.

“I reported back to Mars as a shift lead with Iraq heavily on my mind and a new concept on life, and sometimes the smiles just weren’t there anymore.”

On every trip home, there were difficult adjustments to make.

“You’re a schizophrenic. You have to be able to think ‘military’ and then shut it off and go back to your job,” he explains. “And then your leadership principles are not the same. In the military, it’s life and death, a lot of the things you do could people get hurt.”

Brian Vann, supervisor over the electrical shop in the UTC Department of Facilities Planning and Management, says Snowden’s leadership roles in the military make him a good employee here.

“He’s still got that same mindset. Give him a direction and just leave him alone,” Vann says. “He leads.”

Snowden doesn’t talk a lot to him about the military, Vann says, but he doesn’t get the impression that Snowden is hesitant to talk about it. They just don’t spend a lot of time together because they’re usually on different parts of campus, doing their jobs.

When Snowden was overseas, many of his deployments were at Forward Operating Bases (FOBs) where bureaucratic military operations are run. Although they maintain a three-mile radius around them, FOBs often sit within striking distance of rockets and mortars. The rocket attack that could have killed Snowden was in an FOB in Logar Province, Afghanistan.

“When we first got there, you couldn’t drive two miles out the gate or you would get blown up,” he recalls.

One job in Baghdad, Iraq; Snowden’s FOBs was to track all rockets and mortars fired without a direct line of sight at the target, a tactic known as “indirect fire.” A FOB where he served in Afghanistan was located in an area with one of the thickest concentrations of the Taliban network. “So in that FOB, we took 171 indirect rounds in 282 days,” he says.

One night in his tent where he slept, he was Skyping with his wife when alarms started going off around the base and began zeroing in his unit’s quarters location.

“I said, ‘Honey, I’m going to have to get on the ground.” And she said, ‘Why?’ And I said, ‘Well, an alarm is going off. We are getting bombed. I need to go to our bunker real fast.’ She goes, ‘Don’t turn your computer off,’ and I said, ‘So you want to watch this tent blow up? That’s what you’re going to watch.’”

Despite the warning, she stayed on the Skype link while he ran outside the tent, heading for a bunker.

“I didn’t get 10 feet when a round hit the tent right next to mine. Thank God, everybody was in their perspective buniker; there wasn’t anybody in the tent when it blew. The whole tent caught on fire.”

The threat of dying was a constant while he was in Iraq and Afghanistan, he says. And not just for him. A friend of his in Blackwater, the U.S. company that provided security for private military contractors in the Middle East, was killed by an Improvised Explosive Device, or IED, which were often planted along roadways.

“I remember sitting at my desk, typing away, and all of a sudden there was this huge blast,” Snowden says. “It blew him and four guys completely up and melted the vehicle down.”

Another friend died when he was coming off leave and returning to base. The helicopter the soldier was riding in crashed into the side of a mountain.

Snowden says he still has dreams about the first dead soldier he saw. “I cut him down from a tree because he hung himself.

2 Comments » for ‘We had a lot of bad, bad days’: Dane Snowden recalls life in war zone