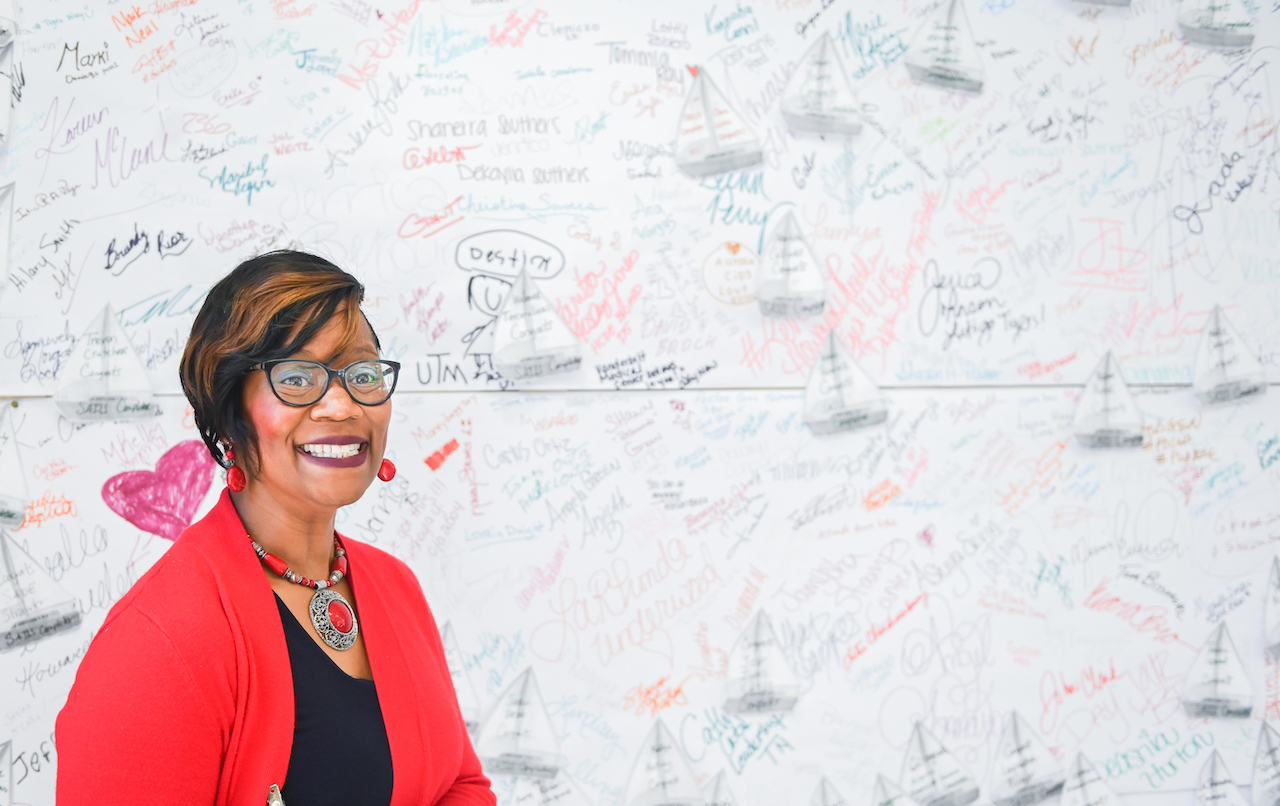 Le Andrea Ware, a 1995 University of Tennessee at Chattanooga alumna and principal at Howard High School in Chattanooga, has been named Tennessee Principal of the Year. The honor was announced at the Tennessee Department of Education’s 2019 LEAD conference in Nashville on Tuesday.

One year into her post at Howard, Ware was named Hamilton County Schools 2018-2019 Principal of the Year in March. That distinction made her one of nine finalists for the statewide honor announced on Tuesday. She was further recognized at a May event to celebrate outstanding performance in Hamilton County’s Opportunity Zone schools.

At the end of a busy Wednesday making presentations on successful initiatives at Howard to others at the LEAD conference, Ware was quick to credit her faculty, staff and students, and their families and supporters.

“I keep saying this is a ‘we’ journey not a ‘me’ journey, because it takes so many people every day,” said Ware, also a graduate of Howard High. “It is special to me, also, as I think about my time at Howard and my 30thanniversary coming up since I graduated. What we’ve been able to do, seeing my classmates who graduated with me in 1990 willing to come together in a purposeful way to honor the 30th anniversary of our class with a scholarship for the students of today—it’s amazing.

“So, when I talk about the we, I mean all the people investing in Howard High School. I wear this news as a badge of honor and one that highlights the fact that Howard is an amazing place and that our students deserve our very best, every day.”

As a Howard student, Ware was a member of Upward Bound, a program that helps disadvantaged students graduate high school and gain acceptance into college. Ware credits the program with helping her succeed, and she continued her involvement in it as a student at UTC, where she said it strengthened her connection to the University and her understanding of what to expect in the transition from high school to college.

“LeAndrea Ware has, from the moment she set foot in the halls of Howard High School as principal, demonstrated leadership in all facets of her role, has addressed all aspects of the school’s service to its students both academically and otherwise, and created a culture of commitment to excellence,” said Valerie Rutledge, dean of the UTC College of Health, Education and Professional Studies. “She has been in a variety of different leadership roles and this is just the latest example of her success as a leader.”

Among major initiatives Ware is implementing at Howard are Future-Ready Institutes partnering the school with local businesses to create programs that teach students about career paths—such as health care, tourism, robotics, architecture and construction—in addition to academics.

Success in that transition, as well as in academic metrics, builds on itself, Ware said.

“That attracts partners to come along beside us, to support and encourage us, because they see that what we are doing, we do enthusiastically, sincerely and for the best interests of the students,” she said.

She counts UTC faculty, staff, students and alumni among those supportive partners, and she said she’s grateful to UTC for preparing her for the opportunity to return to Howard as its principal.

“You know, as a graduate of Howard, I earned a scholarship so that I could go to college anywhere I wanted to, but I wanted to stay right here in Chattanooga, and UTC gave me that option,” she said. “I’m grateful to have had such a great university in the backyard of my high school so that I could prepare well and return to my alma mater.”