Despite disappointment and disillusion, Cooper powers his way to graduation 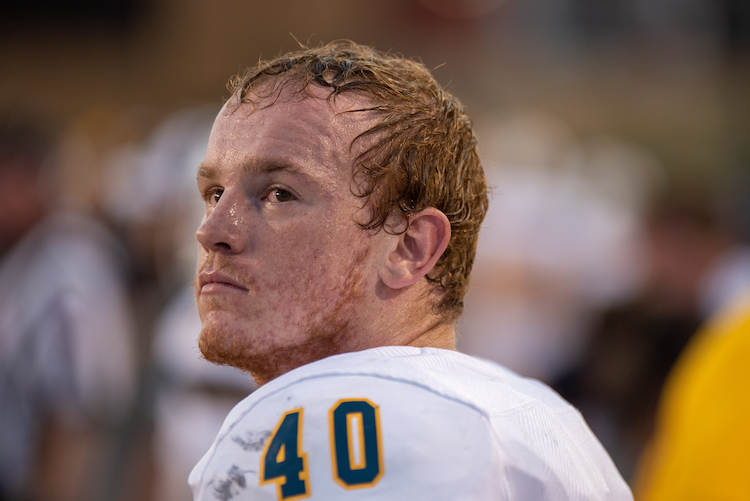 Marshall Cooper played part of the football season with a seriously dislocated thumb on his right hand, which eventually required surgery, and a broken left hand.

If you had to pick just one word to describe the way Marshall Cooper might be feeling on commencement day, that word could be “vindicated.” Or maybe  “validated.”

As someone figuratively slapped in the face before turning his life around, maybe his journey can’t be summarized in just one word.

Cooper, a linebacker on the University of Tennessee at Chattanooga football team and a graduate-to-be majoring in health and human performance, first arrived in the area as a high school junior. He was a solid, two-way player at Hixson High School as linebacker and running back and had high aspirations on the football gridiron.

What he saw in himself, though, was not what others were seeing. Cooper thought he was talented enough to be a Division I player. Those offers never came, though, and he found himself at Carson-Newman University, a Division II school in Jefferson City, Tenn.

Quite simply, things didn’t work out.

“To be honest, I went up there and didn’t take football seriously,” Cooper says. “That was a bad point in my life. I really wanted to play Division I football, I didn’t get any offers, and I just went up there upset that I was at the D-II level.

“On top of that, I had bad habits coming out of high school with my academics. I went there and didn’t take academics very seriously, and I did things I shouldn’t have been doing. I ended up basically flunking out. I was told that, if I couldn’t get my grades up, I couldn’t play, and I wasn’t getting a lot of reps to begin with.”

The naysayers were winning. Not only was Cooper struggling as a football player, but he was living up to low standards as a student.

“I was told multiple times in high school that I wasn’t going to make it academically,” he recalls. “Teachers would say, ‘You’ve got the ability, but you don’t take school seriously.’ But I wasn’t listening. Life had to hit me in the face and say, ‘Hey, I’m about to take away your dreams.’”

Cooper could have easily given up hope, but he wasn’t going to go down with a fight.

After letting his Carson-Newman coaches know that he wouldn’t be returning, Cooper contacted UTC to find out the necessary steps to transfer to the school. Once he found out that he would need a minimal 3.0 GPA to attempt to walk on to the football team, he applied to the university and immersed himself in his studies.

His first semester on campus, “I just kept telling myself: ‘I’m going to do this. I’m going to do whatever it takes,’” he says. “I didn’t talk to any football coaches during that time. I just worked on getting my grades up. I got on the dean’s list that semester. I was on the honor roll. I was able to bring my grades up so I could walk on and eventually earn a scholarship.

“Once I got on top of my studies and treated it just like football, I realized it wasn’t that hard. I’m a bright kid, and once I was able to put in that energy and change the way I looked at school, it was worth it.”

Cooper has been on the dean’s list and honor roll every semester since arriving at UTC while recording a 3.5 GPA. He earned academic all-Southern Conference honors last year.

On the football field, he went from being a walk-on special-teams player in 2017 to a two-year starting linebacker. He was named second-team all-conference honors both seasons and earned preseason first-team all-conference recognition this year. During UTC’s just-completed 6-6 campaign, Cooper had a team-high 105 tackles despite playing all season with a dislocated right thumb—necessitating Thanksgiving Week surgery to repair torn ligaments—and most of the year with a broken left hand.

What’s next in his life’s journey? Cooper says he has been invited to several Senior Bowl games, and he has had gyms reach out to him to inquire about training him for the NFL’s Pro Day. Cooper admits he is intrigued after seeing former Mocs defensive teammates Tae Davis and Isaiah go on to play in the NFL, Davis with the Cleveland Browns and Mack with the Tennessee Titans.

“The college phase of my football career might be over, but I don’t think my football phase is over yet,” Cooper says. “But if it is, I can accept that and move on and figure out what I want to do with my life. That might be coaching football, and it would be all right.

“Look at where I am now and where I used to be. I used to be that kid getting in trouble. I wasn’t taking my grades seriously. And now, look at what I have accomplished. There has been a huge growth process in my life in the past couple of years.”

When UTC graduation ceremonies take place on Dec. 14, handshakes with Cooper might be at a minimum due to his right thumb surgery, but smiles will be in abundance. After everything he has been through, it’s OK if Cooper feels vindicated and validated about receiving his bachelor’s degree.

“Growing up, my mom and others always told me that I needed to get a degree. And I told them, ‘I just want to play football. That’s it.’ It took some time for everything to click for me.

“Coming from having something like a 1.0 (GPA) my first semester to being able to walk across the stage and say that I worked hard enough to get a degree and to be able to go out with honors, too. I know that this is a huge accomplishment.

“It’s going to be amazing. I’ll be able to say I graduated from college. It will be something that my little brother can look up to. My future children, I can tell them that, too. In the beginning, a degree was not even a priority. Now it’s probably more important to me than the football aspects of my career.”

And late morning on commencement Saturday, there will be one word that will describe Marshall Cooper: “Graduate.”

5 Comments » for Despite disappointment and disillusion, Cooper powers his way to graduation