Determination and dedication: Quitting was not an option for Chris Land 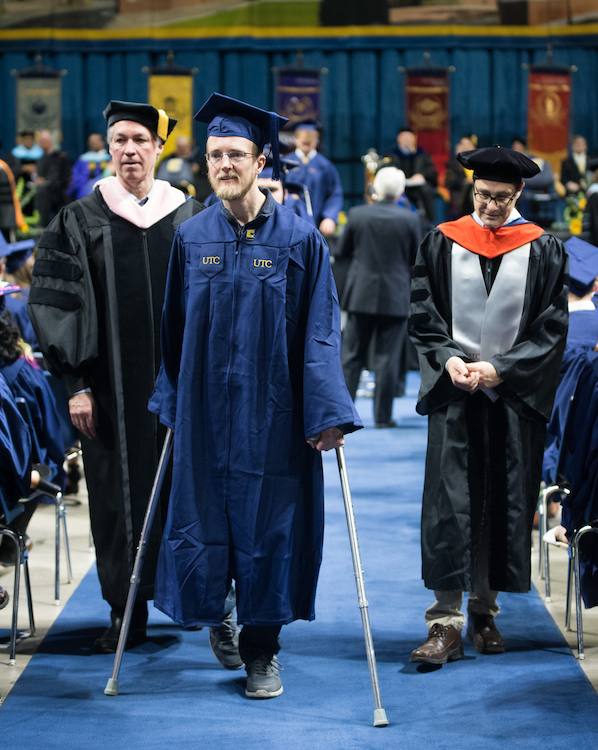 Chris Land received his Bachelor in Mechanical Engineering on Dec. 14 at the Fall 2019 Commencement Ceremony in McKenzie Arena.

Chris Land wanted to be a mechanic.  It was pretty much pre-destined.

“Well, my whole life I have been raised in a mechanic family. So, I’ve always been under the hood of vehicles, but I planned on being a garage mechanic or something,” he said.

But pre-destiny didn’t come true in his case.

“When I was 16, I had a car accident and traumatic brain damage, so that took my balance away from me and put me in a wheelchair and on crutches. So that slowed me down significantly. Then I couldn’t balance and work under the hood as well as I could before, so I decided I would go with mechanical engineering because you get to do a lot of the work behind a desk.”

On Saturday, Dec. 14, using crutches, Land walked across the stage in McKenzie Arena and was handed his bachelor’s degree. He received a standing ovation from the arena crowd.

Before the ceremony, he already knew the emotion he’d feel at the time.

“Relief. Yeah, relief. And that’s all that I know. It’ll be relieving and it’ll boost… It’ll make me feel like I did it. With God’s help, I did it. Now, with God, all things are possible.”

Land, who speaks clearly but slowly, already has used his knowledge to help others with physical disabilities.

“That was parallel bars to help kids with disabilities walk around. … It’s been so long ago I forget what his condition was, but I remember it had a table that rolled along the bars and that he could walk around and build Lego stuff on it. Or do homework.”

Now his plans are simply to find work. But there is one job that is his Holy Grail.

“Design cars or aircraft,” he said. “I was in a team, my senior project was building a remote control airplane to enter a competition and it got awarded here as I think first or second in my chemical engineering. But it wasn’t just me, it was a team project and collaborative.

That’s one thing I’ve learned here. You can’t do everything by yourself. “You don’t build it all. You build your part of it the best you can.”

4 Comments » for Determination and dedication: Quitting was not an option for Chris Land