For Anderson, stuttering is a way of life, not a barrier 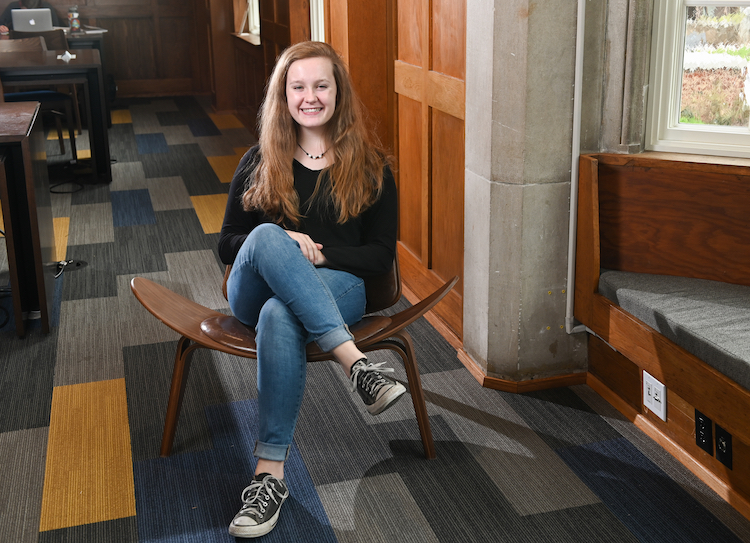 Mallory Anderson is an Honors College freshman majoring in biochemistry with a minor in mathematics.

Mallory Anderson was standing in line at a coffee shop, placing her order. Or trying to.

Public tasks like ordering food make her nervous, causing her stutter to kick in more often. It did so at the coffee shop. As she struggled to get the words out, a guy in line behind had a suggestion:

“I wanted to turn around and punch this guy, but I didn’t, of course,” said Anderson, a freshman in the Honors College.

“I think one of the toughest things is that people are just like, ‘Oh, just spit it out’ or something like that,” she explained. “Stutterers can speak perfectly well, it just takes a little bit longer for us.”

She has been a stutterer all her life, but it’s hard to tell in conversation. An Honors College freshman majoring in biochemistry with a minor in mathematics, she speaks with poise and confidence. Only occasionally does a word stick and then for only a second or two.

“For me, I have specific letters, words, phrases that I try to avoid at all costs,” she said. “My brain is thinking probably two or three sentences ahead about what I’m about to say, and whether I can think of another word to say it in the place of it.”

In January 2019, Anderson connected with a chapter of the National Stuttering Association (NSA) near her home in Clarksville, Tenn. It gave her a community to embrace as well as be embraced.

While her father and brother both stutter, she had never met other adults who did—or who would talk about it.

But Tammy Flores, director of NSA, did want her to talk about it, so Anderson wrote an essay, “How the National Stuttering Association Has Impacted My Life,” for the association’s website.

“I walked into a room with a lot of smiling faces,” she wrote. “I introduced myself, and stuttered, naturally, and they all still listened intently, almost as if they were on the edge of their seats.”

One of her UTC professors, Joseph Jordan in the Department of English, is also a stutterer and he and Anderson have often discussed the trials stutterers face and how those issues can be intensified in college.

“It’s traumatic to a degree,” he said. “When I first went to college, I felt depressed and isolated. She is the exact opposite in a way. She has become so self-confident.

“I am amazed by the—I don’t want to call it courage because I don’t think that’s the way she perceives herself—but she’s just so self-assured, and she hasn’t let it prove to be any obstacle whatsoever.”

Knowing how the Nashville NSA chapter helped her, she and Jordan have discussed starting one  in Chattanooga.

“I will talk to anyone about it, and I will explain what’s happening, and that it’s not that I’m less smart than people or less capable than people. It’s just something that makes it to where it’s tougher for me to talk.”

3 Comments » for For Anderson, stuttering is a way of life, not a barrier