‘Education About Asia’ hits a quarter century of publication 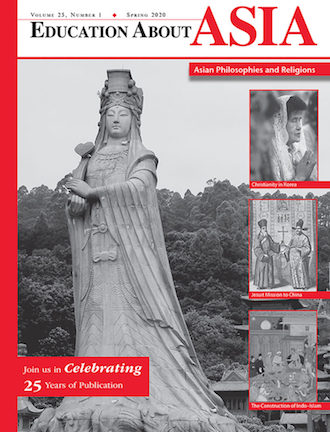 To read a Q&A with Lucien Ellington on the Education About Asia journal, go to the Association for Asian Studies website.
For more on Lucien Ellington and his background, go to: https://bit.ly/3dDDgAt

Lucien Ellington describes his first encounter with Asia as “an epiphany of sorts.”

Having taught world history at three high schools, he believed he was well-versed in the subject. Then he attended a seminar that focused on teaching about Japan.

“I left the meeting with a distinct change in self-perception: I was a Western civilization, but not a world history teacher,” says Ellington, who came to the University of Tennessee at Chattanooga in 1983.

“My love of many Western institutions is profound, but learning about non-Western cultures is an incredibly rich experience in itself and has helped me to better understand western culture.”

After spending eight years teaching world history and economics at three high schools and three years as a faculty member and director of the Center for Economic Education at Delta State University in Mississippi, he was hired by UTC.

As assistant director of the UTC Center for Economic Education and assistant professor of education in what was then the Department of Curriculum and Instruction, he continued his fascination with Japan and found that it melded with his interest in economics.

At UTC, he met two professors who would become mentors: the late W.H. Peterson in economics and Richard Rice in Japanese history.

“Both, in markedly different ways, substantially extended my understanding and love of these two fields,” Ellington says.

Armed with that affection, in 1996, he created Education About Asia, a teaching resource journal, which is celebrating its 25th year of publication.

In addition to his work on Education About Asia and at UTC, he also is serving as vice chairman of the board for the Chattanooga Charter School of Excellence, which features a liberal arts curriculum and serves inner-city children.

The biggest problem he has seen in young students is the inability to read well after third grade. About two-thirds of all students face the issue, which he calls “the most major educational challenge the country faces.” He and James Tucker, the UTC McKee Chair of Teaching and Learning, have been working together to attack the problem.

Throughout it all, Ellington credits UTC with helping to maintain and expand his “passion for liberal education and for school improvement.”

“As my career developed, a number of administrators and faculty colleagues have inspired and encouraged me,” he says. “I have tremendous gratitude for this institution and for many outstanding faculty, staff  and students who I’ve met.”