UTC graduate has ‘surreal’ moment in unveiling of her award 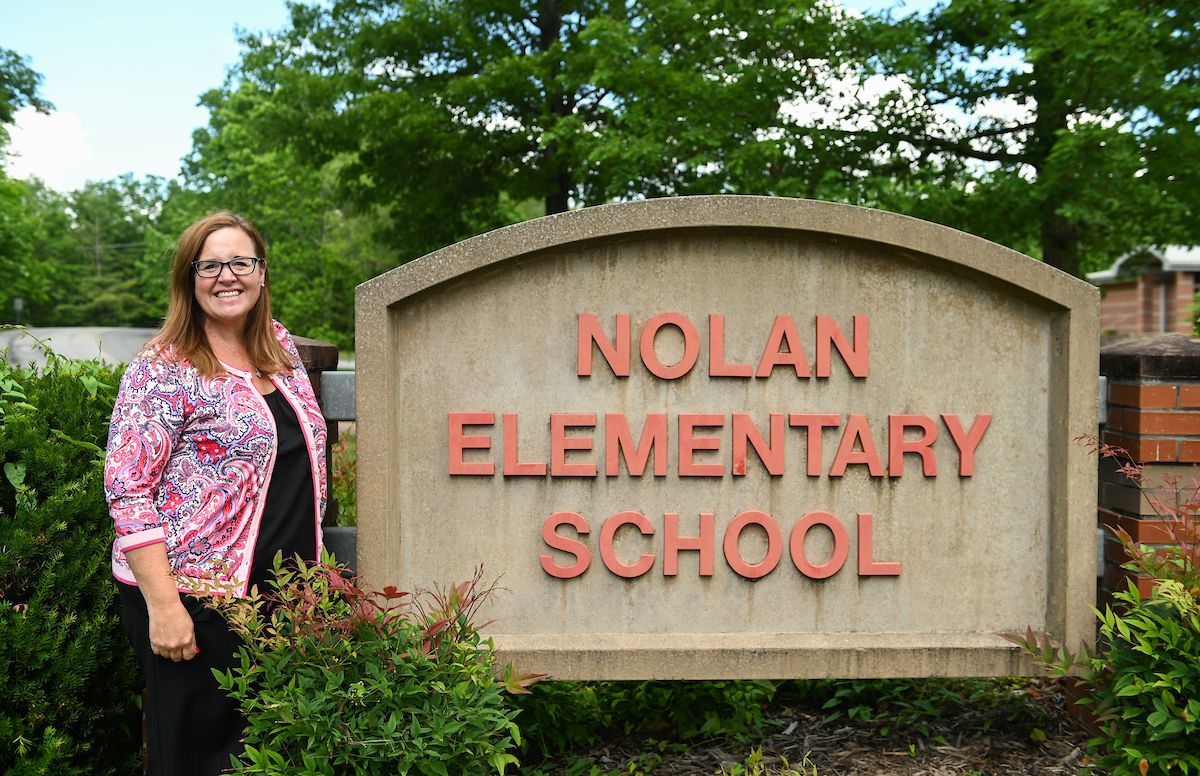 Ashley Willson, principal of Nolan Elementary School, selected as Tennessee Teacher of the Year for a national award.

Ashley Aldridge Wilson acknowledged there were a few anxious moments when she had trouble getting into the Zoom video conference.

Wilson, the principal at Nolan Elementary School in Signal Mountain, was attempting to access the video platform in late May for a regularly scheduled Tennessee Principals Association (TPA) board meeting, for whom she serves as the District 7 membership director. Instead of being directed straight into the meeting, however, she found herself on hold in a virtual waiting room.

“Typically, principals are pretty on-time people,” said Wilson, who received her bachelor’s and doctoral degrees from the University of Tennessee at Chattanooga. “I texted and asked, ‘Did I misunderstand? Is it Central time or Eastern time?’ They said, ‘Hold on. We’re getting it set up. We’re just letting people on, so hold on.’

“When they finally let me in, I saw one of my teachers right away and I immediately thought, ‘Oh no, I’m in the wrong Zoom.’

The Zoom meeting also included Hamilton County Schools Superintendent Bryan Johnson and many other principals from around Tennessee making Wilson wrestle with thoughts of “What’s going on?”

But those anxious moments quickly turned surreal. “They told me, ‘We’re on here because you’re the winner for the state.’”

Surprise! That is how Wilson learned she had been named the 2020 National Distinguished Principal from Tennessee by the TPA.

“I was completely surprised and incredibly humbled to be selected,” she said. “I was told they usually come to your school to surprise you, but this was the surprise of a lifetime. They all said lovely things about me on the Zoom that were incredibly flattering. It seemed so undeserving, but it was quite a moment.

The National Distinguished Principals Program was established in 1984 as an annual event to honor exemplary elementary and middle school principals who set the pace, character and quality of the education children receive during their early school years. The program is jointly sponsored by the U.S. Department of Education and the National Association of Elementary School Principals. One principal is chosen from each of the 50 states and the District of Columbia.

“I see the good work that all principals do, and I wouldn’t put my work above theirs; that’s just not the spirit of who I am,” Wilson said. “But I do care deeply. I want the very best and I’m unrelenting in that pursuit. I think to be a truly effective principal, it’s not a 9-to-5 job. I don’t leave it at school; I’m a principal all the time.”

As part of the nominating process, multiple letters of reference were submitted on Wilson’s behalf. A Nolan School parent wrote, “In addition to making sure students are pushed to their academic potential, Dr. Wilson has created a joyful school culture. I can be sure that when I enter Nolan, I am going to have a positive experience.

“Each morning, Dr. Wilson greets students in the lobby, encouraging them as they start their day. She begins the day with the Nolan pledge and a motivational message for students. She observes teachers encouraging them to develop their instructional strategies. She is a true advocate for teachers and students.”

“I take pride that our school’s positive climate is reflected in the ways that teachers are passionate about teaching,” Wilson said. “Children enjoy learning, parents express continual thanks for the service we provide, and our community rallies to show unwavering support. It’s all about us together.

Wilson grew up attending Mocs basketball and football games alongside her father, Colin Aldridge, a 1967 graduate from what was then the University of Chattanooga. After earning her undergraduate degree from UTC in 1996, she worked primarily in the Hamilton County School system as a teacher and assistant principal.

At the same time, she continued her educational journey, which culminated in a doctorate in learning and leadership from UTC in 2009. She held principal roles in Knox County and Sumner County and an instructional coaching position in Nashville before returning to Chattanooga in 2018 to take over the Nolan principal reins.

She cited Valerie Rutledge, dean of the UTC College of Health, Education and Professional Studies, as one of her influences.

“I was honored to have Dr. Valerie Rutledge as a professor and dissertation chair. She is a passionate advocate for students and best practice, and she continues to be someone with whom I hold great respect and admiration,” Wilson said.

“As I’ve been reflecting, I have been thinking about the people in my life who helped me dream bigger. I have always been someone who deeply cares about people. I don’t know where the heart for mentoring came from; I think it’s just probably innate within me. I want to see everyone thrive and do the very best that they can do and be the best people that they can be.”

In October, Wilson will once again get the opportunity to dream big. She will be making her maiden voyage to Washington, D.C., joining the other state winners at the National Distinguished Principals Awards ceremony

Instead of anxious moments, she’s eager to get there.

“I can’t wait for the conversations. I can’t wait for the learning,” Wilson said. “There will be a lot of learning and think tanks and roundtable discussions, which is right up my alley. I hope to bring back lots of new ideas to continue to advance the work. It’s exciting. I still can’t believe that it’s true.”