by UTC Communications and Marketing November 16, 2020 — No Comments 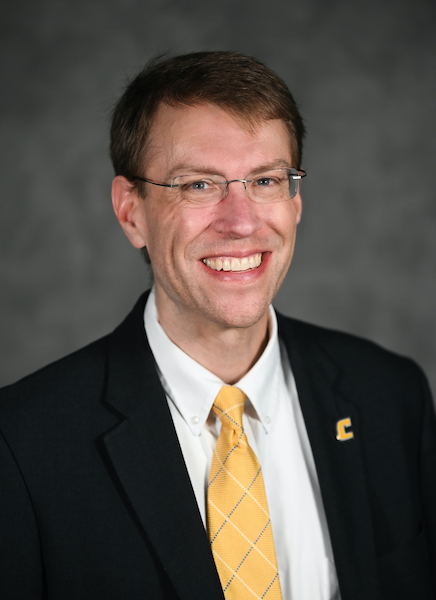 Matt Matthews is now officially vice provost for the University of Tennessee Chattanooga, having had the word “interim” removed from the job title he’s had since 2018.

“In a search last year that was put on hold, Matt was tapped by the search committee as the top candidate in an exceptional group of finalists. His regular appointment is overdue,” Provost Jerold Hale said. “In every meeting where Matt has introduced himself, he has carefully indicated that he is interim vice provost. I look forward to hearing him drop the ‘interim.’”

Since June, Matthews has been co-chair of a committee charged with implementing the University’s COVID-19 health and safety protocols.

“We’ve done our best. It has been a marvel to watch all of the folks that I’ve had contact with doing all of the different things that they’re doing in these circumstances,” Matthews said. “I feel like we’ve got a great group here that’s ready to work on a fix when we need to.”

With a Ph.D. in math from North Carolina State University and fresh off a postdoctoral appointment at Duke University, Matthews joined the UTC faculty in 2004 as an assistant professor. In 2014, he was promoted to associate professor of mathematics and named interim head of the department. He remained in that position until 2016, when he was promoted to the rank of full professor and appointed associate dean of the College of Arts and Sciences. In 2018, he was named interim vice provost.

“He has a broad range of professional and administrative experiences,” Hale said. “The breadth of roles that he has filled make him well-suited to be vice provost. He has a unique ability to view issues from a variety of perspectives. He brings a combination of empathy, an eye for detail and sound decision-making abilities to every task he takes on. We have significant work ahead in Academic Affairs, and I am pleased that Matt will be a part of the team.”

Matthews said he’s grateful for the confidence of UTC administration.

“To me, it’s an affirmation that the institution values my service in this role,” he said. “So they’ve affirmed that I believe I’ve done a good job for them for the past two years and that they have faith that I will continue to do so.”